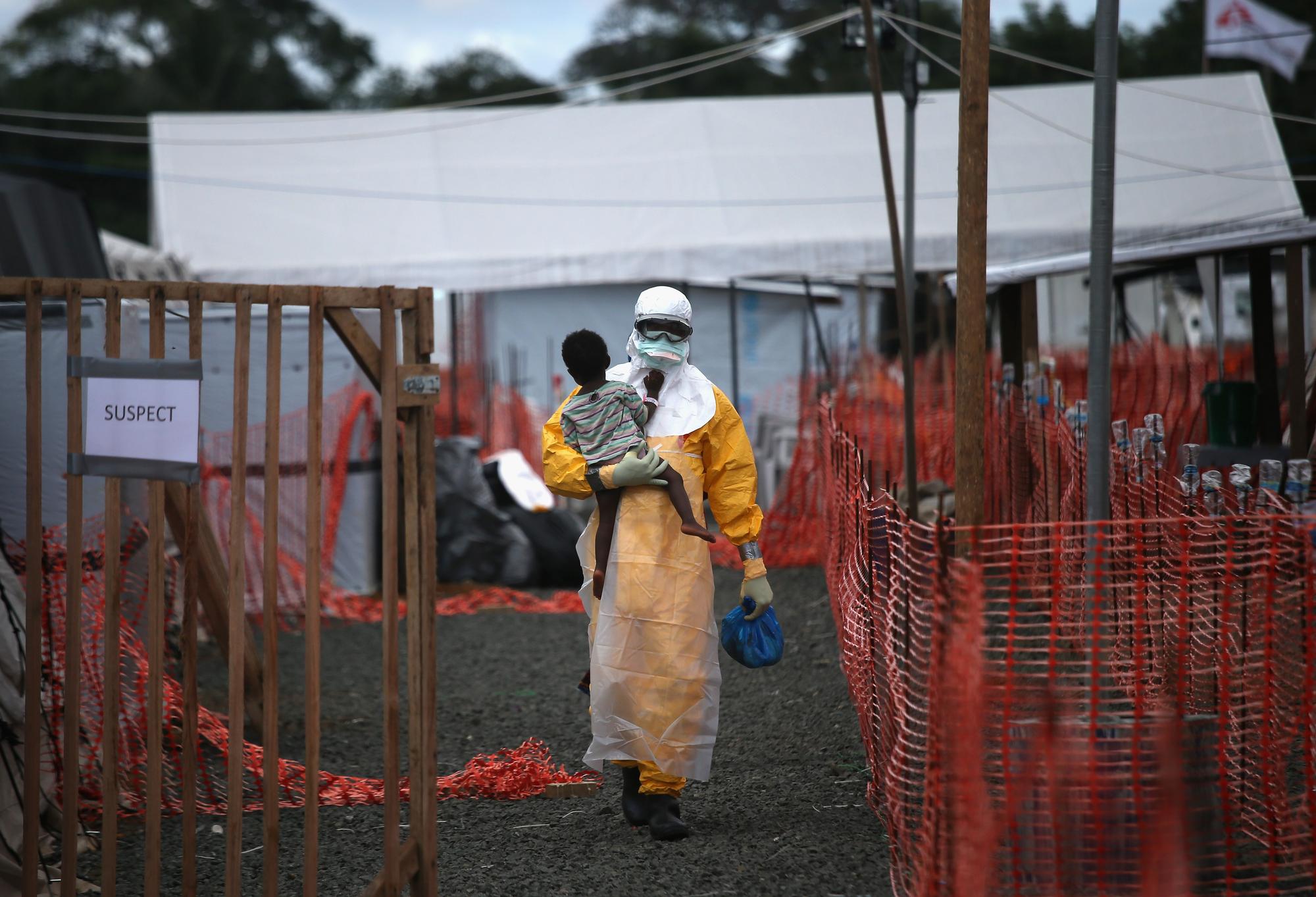 Caption
An MSF health worker carries a child suspected of having Ebola in an MSF treatment centre in Paynesville, Liberia, 2014.
© John Moore/Getty Images

Ebola is one of the world’s deadliest diseases.

It is a highly infectious virus that can kill up to 90 percent of the people who catch it, causing terror among infected communities.

Ebola is so infectious that patients need to be treated in isolation by staff wearing protective clothing.

In the Democratic Republic of Congo (DRC), we have recently ended our response to the second-worst Ebola outbreak in history.

With over 3,300 cases, this is the second-worst Ebola outbreak in history – following the 2014 West Africa epidemic.

Declared while DRC was still grappling with the tenth Ebola epidemic in the country’s northeast, and amidst the COVID-19 pandemic, this new Ebola outbreak has already spread to 11 health zones in the province, in a very hard-to-reach region where some villages are only accessible by river.

Équateur province is five times the size of Wales, with some health areas only accessible by river using canoes or after hours of difficult transport by rough roads through the forest. Only one helicopter is available to humanitarian organisations to move around the region.

As of 1 September 2020, MSF teams are supporting nine treatment and isolation centres in five health zones to provide care as close as possible to the active hotspots of the disease.

As of 2 September, a total of 110 Ebola cases had been recorded in Équateur province – 104 confirmed, six probable – with 47 deaths.

OUTBREAKS OF EBOLA IN DRC IN THE PAST 40 YEARS

Ebola can be caught from both humans and animals. It is transmitted through close contact with blood, secretions, or other bodily fluids.

Healthcare workers have frequently been infected while treating Ebola patients. This has occurred through close contact without the use of gloves, masks or protective goggles.

In areas of Africa, infection has been documented through the handling of infected chimpanzees, gorillas, fruit bats, monkeys, forest antelope and porcupines found dead or ill in the rainforest.

Burials where mourners have direct contact with the deceased can also transmit the virus, whereas transmission through infected semen can occur up to seven weeks after clinical recovery.

What are the symptoms of Ebola?

Early on, symptoms are non-specific, making it difficult to diagnose.

The disease is often characterised by the sudden onset of fever, feeling weak, muscle pain, headaches and a sore throat. This is followed by vomiting, diarrhoea, rashes, impaired kidney and liver function and, in some cases, internal and external bleeding.

Symptoms can appear from two to 21 days after exposure. Some patients may go on to experience rashes, red eyes, hiccups, chest pains, difficulty breathing and swallowing.

How is Ebola diagnosed?

Diagnosing Ebola is difficult because the early symptoms, such as red eyes and rashes, are common.

Ebola infections can only be diagnosed definitively in the laboratory by five different tests.

Such tests are an extreme biohazard risk and should be conducted under maximum biological containment conditions. A number of human-to-human transmissions have occurred due to a lack of protective clothing.

“Health workers are particularly susceptible to catching it so, along with treating patients, one of our main priorities is training health staff to reduce the risk of them catching the disease whilst caring for patients,” said Henry Gray, MSF’s emergency coordinator, during an Ebola outbreak in Uganda in 2012. Henry also worked on the 2014 outbreak.

“We have to put in place extremely rigorous safety procedures to ensure that no health workers are exposed to the virus – through contaminated material from patients or medical waste infected with Ebola.”

How is Ebola treated?

There is no cure for Ebola, but medical teams can manage the symptoms of the virus in order to give patients the best chance of survival.

Once a patient recovers from Ebola, they are immune to the strain of the virus they contracted.

An Ebola outbreak is officially considered at an end once 42 days have elapsed without any new confirmed cases.

Is there a vaccine for Ebola?

Prevention is key to protecting communities and stopping the spread of an outbreak.

There are currently two trial vaccines for Ebola, one of which is already in use in DRC.

The Merck vaccine is estimated to offer effective protection for 97.5 percent of participants 10 days after vaccination and is a promising tool in the fight to contain the outbreak.

Due to the limited availability and investigational status of the vaccine, the vaccination strategy is limited to a "ring" approach. This means that, alongside frontline workers, only people who have been in contact (directly or indirectly) with people suspected of having the virus are eligible to be vaccinated.

However, tracing people who have been in contact with an Ebola patient has proved notoriously difficult in DRC, so MSF supports recommendations to expand vaccination activities to cover the entire population that is at risk.

Such steps are needed urgently if we are to prevent the epidemic from lasting another year.

At the same time, a second experimental vaccine produced by Johnson & Johnson has been given the green light in DRC as part of an extended clinical trial and MSF is part of the global consortium leading the rollout.

Podcast: An MSF doctor shares his experience of an Ebola outbreak

Hear more stories from our staff on the MSF podcast, Everyday Emergency.

Insecurity in the region is still a significant challenge for the Ebola response, as northeast DRC has been an area of active conflict for the past quarter-century and is rife with armed groups.

Alongside this, healthcare workers associated with the Ebola response are still not trusted by the community. They have been specifically targeted, sometimes forcing crucial activities such as contact tracing or vaccination campaigns to be suspended, limited or cancelled.

We must place local communities at the heart of the emergency response. All organisations must work together in this direction to put an end to this terrible outbreak 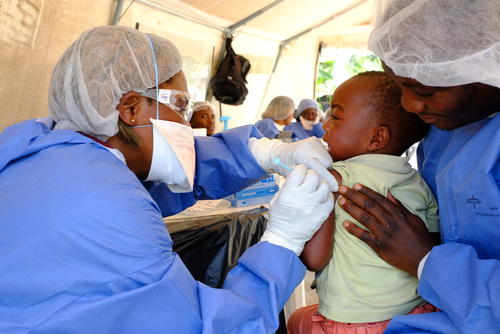 Ebola: Six things you need to know about the “promising” vaccine 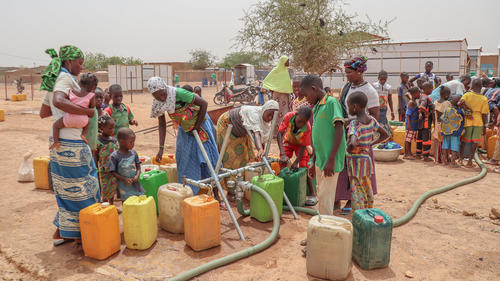 Cokie is not your typical grandmother: she has travelled to 14 countries with MSF, working as a logistician and a water sanitation engineer on infectious disease projects
Learn more 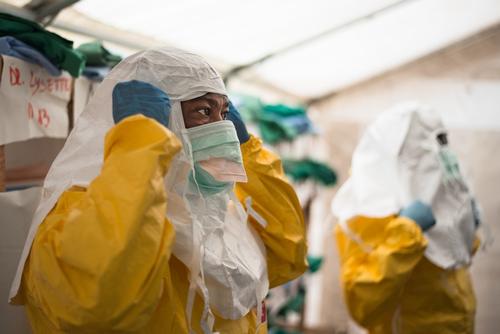 One new case has been confirmed from the city of Mbandaka, which has a population of more than a million and is a busy port city on the Congo River
Learn more