We perform tens of thousands of life-saving operations each year.

From facial reconstructive surgery in Nigeria to dealing with the human cost of bomb blasts in Yemen, our surgical programmes can focus on a specific need, or be wide-ranging – reflecting the complexities of the places where we work.

“There are no words to describe the rewards of bringing life and hope to someone who, if you were not present, would have neither,” says Eve Bruce, a Médecins Sans Frontières/Doctors Without Borders (MSF) surgeon from Ireland.

“The two-year-old Afghan boy who fell into a vat of boiling oil, requiring dozens of procedures, smiling as he leaves the hospital.

“The 12-year-old Palestinian boy, shot in the leg in conflict, sure he would never walk or play again, walking out with his family with all the hopes and dreams that a 12-year-old should have.

“These are a few of the memories that will forever fill my heart and remind me why I became a doctor in the first place.”

SURGICAL INTERVENTIONS BY MSF IN 2020

CAESAREAN SECTIONS BY MSF IN 2020

Our surgical facilities and equipment can vary depending on the places where we work.

In emergencies we may have to rapidly deploy tents or inflatable hospitals, as we did responding to the Nepal earthquakes in 2015 and Cyclone Idai in southern Africa in 2019.

However, most of the time, we support or take over existing medical facilities, usually in partnership with a country’s Ministry of Health. Examples include our projects in Ramtha, Jordan, and Boguila, Central African Republic.

We have built our reputation by ensuring a baseline level of quality wherever we work.

Though operating in the bush may be different to a state-of-the-art hospital, we support our staff with the equipment necessary to perform a range of surgical procedures, wherever necessary.

Across all of our surgical projects there is an anaesthetist at hand.

This vital element of surgery facilitates pain management, ensuring patients stay comfortable and stable in what can be complex and time-consuming operations.

Our anaesthesia providers also manage post-operative pain and in the care in our intensive care units.

The most common form of surgery we provide is the treatment of infections and wounds.

Infection can be anything from appendicitis to an infected leg wound. These conditions are easily treatable (and preventable) in the developed world, but can pose major challenges for those living without access to healthcare.

Imagine a person is injured in a remote community, with poor hygiene conditions, several hours away from the nearest hospital. By the time they access care, a simple cut may develop into a full-blown infection.

In these primarily rural areas, we see a range of low-level general trauma. People may burn themselves cooking with kerosene, or get injured while farming – meaning our surgeons are required to adapt and perform a broad spectrum of procedures.

War surgery is fast-paced and complex.

As the majority of our patients are civilians, we see more blast injuries than bullet wounds; as, increasingly, ordinary people fall victim to indiscriminate attacks.

This means many patients have simultaneous injuries. An abdominal wound could be accompanied by injuries to the legs, head and arms. As a result, these programmes require more personnel, with a general and orthopaedic surgeon often working together.

MSF surgeon Michael Roesch spent February 2015 in Gorlovka, a city on the frontline of the conflict in east Ukraine.

“The past six days have been really overwhelming for me,” he said at the time. “I’m a surgeon, but I have never in my life seen so many amputated people – people go shopping and one hour later they are without their legs.

“The surgeons here – who have never had to deal with war-wounded before – are having to carry out at least one or two amputations every day.”

This type of fast-response surgery is also needed to treat survivors of major trauma; people involved in incidents such as road traffic accidents or house fires.

Our patients are given rehabilitative care and physiotherapy in all of our war surgery and major trauma programmes, to help them regain function.

Currently, we have specialised war surgery programmes in Jordan and Yemen, and major trauma centres operating in Central African Republic and Haiti, to give just a few examples.

Our obstetric surgery programmes are located all over the world, focused on helping mothers with life-threatening pregnancy complications.

The bulk of our procedures are caesarean sections (C-sections). We perform these on women suffering from pre-eclampsia (pregnancy-related high blood pressure), obstructed labour, or breech presentation.

Obstetric surgery can extend to repairing a ruptured uterus, or resolving ectopic pregnancies.

Our major maternity programmes include clinics in Haiti, Sierra Leone and Yemen.

At our Amman hospital in Jordan, orthopaedic and plastic surgeons perform face, head and neck surgery, reconfigure fractures that have healed incorrectly, and provide flap coverage (a technique similar to a skin graft, whereby a tissue is lifted from a donor site and moved to a recipient site with an intact blood supply).

“Each patient has their own story of a life affected by war,” says Dr Ali al-Ani from our Amman reconstructive hospital in Jordan. “But the story of a seven-year-old Iraqi boy who was admitted to the project in 2009 touched me most.

“Wael was on his way to visit his grandparents when a roadside bomb exploded.

"His mother was killed and Wael was badly injured. He lost his right leg and his left leg was severely damaged.

"Despite the complexity of the surgeries, over the course of several operations the surgical team was able to reconstruct his damaged leg sufficiently for it to bear weight, and to attach prosthetics, so that Wael was able to walk again."

A fistula is a hole created between the vagina and the bladder or rectum, through which stool or urine leaks out continuously. It is usually the result of complicated childbirth.

We roll out our fistula “camps” for a set number of weeks, calling on surgeons who specialise particularly on fistula repair.

Noma is a gangrenous infection of the mouth that spreads across the affected person’s face, eating tissue around the cheeks and nose.

Once the infection is cleared, the patient is left with devastating facial disfigurements.

Our facial reconstructive surgeons help restore some normality to their patients’ lives – who are usually children – reducing the physical pain and the torment of social exclusion. 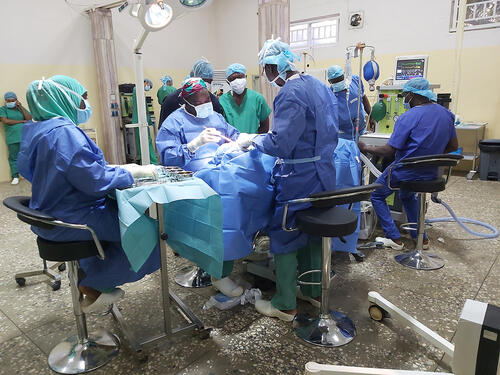 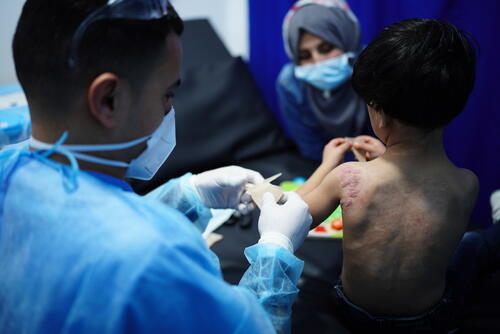 Palestine: Why so many children in Gaza need treatment for burns 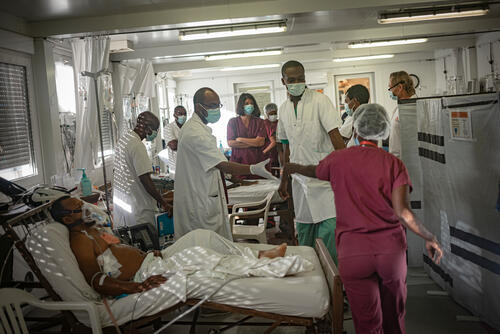 Haiti: How one hospital adapted to a tumultuous year