Every year, thousands of people fleeing violence, insecurity, and persecution attempt to cross the Mediterranean Sea.

They make this treacherous journey via North Africa and Turkey, in search of relative safety in Europe.

And, every year, countless lives are lost at sea, while people face unimaginable cruelty on their way through transit countries such as Libya.

Between 2017 and 2021, at least 8,500 people have drowned or gone missing while attempting to cross the Central Mediterranean – the world’s deadliest sea border.

"People in dangerous situations like Libya have no choice over how they get to safety. They should not be left to drown."

Even when there are no rescue boats at sea, people still risk their lives by trying to cross the Mediterranean in flimsy rubber and wooden dinghies.

This is because, for many, this journey is the last resort. A lack of search and rescue capacity only serves to make the risks they face more extreme.

Our independent funding from private donors like you allows us to work in the Mediterranean. It means we can provide medical care where the need is greatest, with no strings attached.

On 13 May 2021, Médecins Sans Frontières/Doctors Without Borders (MSF) chartered its own ship, the Geo Barents, to save lives in the Central Mediterranean and provide emergency medical care to survivors.

This is the eighth consecutive year that MSF has been compelled to launch search and rescue operations. We do this because EU states are abdicating their humanitarian responsibility to provide proactive search and rescue, leaving a deadly gap.

Search and rescue: In numbers

PEOPLE DEAD OR MISSING IN THE CENTRAL MEDITERRANEAN IN 2021

The majority of people attempting the dangerous Central Mediterranean route leave via Libya, where refugees and migrants face arbitrary detention, extortion, torture and – all too often – death.

However, not only are European governments abandoning people at sea, they are actively supporting forced returns to Libya. In 2021 alone, more than 32,000 people were intercepted at sea and taken back.

MSF has documented countless harrowing testimonies of violence against men, women and children trapped between Libya and the sea.

On board the Geo Barents, 84 percent of violent events reported to our teams had occurred in Libya. This includes significant levels of violence against women and children – 29 percent were minors, the youngest being just eight years old.

MSF search and rescue: the facts

The Central Mediterranean remains the world’s deadliest sea border, with more than 1,500 people reported dead or missing in 2021.

Everyone has the right to flee for their safety, to seek asylum, and to have their asylum claim assessed. At no point should this involve anyone being forced to risk their lives.

Refugees, migrants and asylum seekers are not interchangeable terms. The following is a brief explanation of the very different legal definitions:

As a humanitarian organisation, MSF does not have a mandate or means to assess the immigration status of the people we assist.

We provide medical care without judgment and strongly believe that no human being should drown when the means exist to prevent it.

Listen to a rescue unfold on this episode of Everyday Emergency, the MSF podcast

Our primary aim is to prevent loss of life, not to provide transport.

International law says that people rescued should be disembarked in a place of safety.

As a humanitarian organisation concerned with the well-being of vulnerable people rescued, we will seek to swiftly disembark in the closest safe port.

MSF does not decide the port of disembarkation - this is decided by the competent maritime authorities.

The first rescue carried out by Ocean Viking, a rescue ship MSF worked on from 2019-2020

The Geo Barents is a research vessel, built in 2007. The ship has undergone modifications to operate as a rescue vessel and is now fully equipped with a medical clinic and recovery rooms.

The ship can carry 300 survivors on board but could if needed in an emergency accommodate more.

Geo Barents will be prepared for the likelihood of having people on board for longer periods given the previous experience with long stand-offs at sea.

With the arrival of the COVID-19 pandemic, we prepared ourselves for the possibility of an outbreak on board and began taking all necessary precautions to mitigate the risks associated with this.

The UK Government has exacerbated this appalling situation, having supported the Libyan coastguard through training and funding, enabling the return of refugees and migrants to detention centres where thousands of people, including children, were kept in inhumane conditions.

“We believe the UK Government has a responsibility to refugees and migrants who have suffered due to its actions in Libya," says Vickie Hawkins, executive director of MSF UK. "They were well aware of the detention conditions to which refugees and migrants were being returned through their own humanitarian support to those detention centres, and so we are calling on them to now provide safe and legal routes directly to the UK. They should also contribute to state-led search and rescue in the Mediterranean, and publicly support NGO search and rescue efforts at this critical moment.”

“People in dangerous situations like Libya have no choice over how they get to safety. They should not be left to drown or to be locked up in detention centres as a punishment for taking the sea crossing or to deter others from making similar journeys. It is not too late for the government to change course away from this mindlessly punitive approach.”

We are compelled first and foremost to assist people who are dying in the Mediterranean. We have the means and, for us, ignoring the problem is not an option.

Of course, we are aware that by doing this we are entering a very contentious political debate in Europe.

But we believe that inaction cannot be justified on ideological grounds and that, in fact, as a medical organisation that takes its cues from medical ethics, we must take action.

Find out more about our principles >

Listen to MSF nurse Courtney Bercan describe her time on an MSF search and rescue ship on Everyday Emergency, the MSF podcast

Featured stories from the Mediterranean 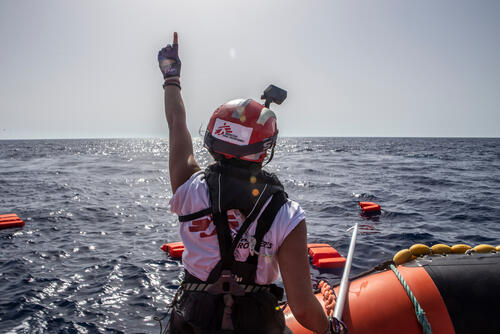 Search and rescue: MSF, SOS MEDITERRANEE, and SEA-WATCH warn of more deaths in the Central Mediterranean 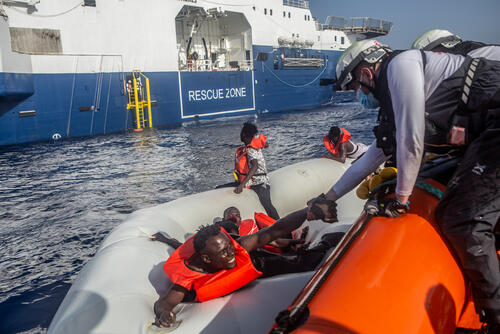 A pregnant woman died despite desperate efforts to resuscitate her, following the partial sinking of a rubber boat in the central Mediterranean Sea
Learn more 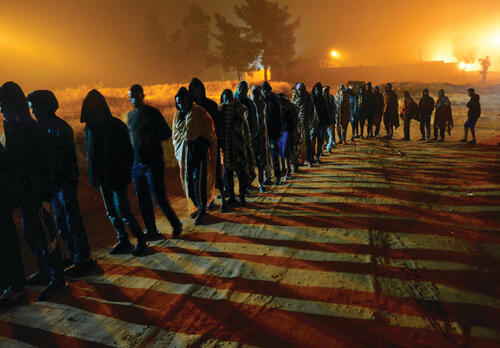 Libya detention: “Crossing the sea is facing death, but so is staying”