Working with us as a paediatrician is demanding and very rewarding.

From managing Intensive Therapeutic Feeding Centres during a nutrition crisis to caring for children struck by cerebral malaria, Médecins Sans Frontières/Doctors Without Borders (MSF) paediatricians provide lifesaving care every day in our projects.

Paediatricians are based in projects.

You will often care for children affected by some or all of the following:

Read our guide on the application process for all overseas roles

If you can speak French or Arabic you're much more likely to be accepted onto our register.

Your language level may be tested during the recruitment process. 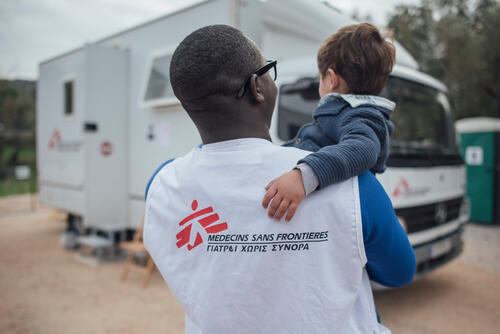 In their own words

Read first-hand accounts from MSF paediatricians in the field

Stories from the field

Doctor Conor Kenny spent four months in Greece working with refugees who had traveled as far as the village of Idomeni on the Greek/Former Yugoslav Republic of Macedonian border.

In this podcast he discusses seeing women and children being teargassed and hit with rubber bullets, and the eviction of the camp that forced thousands of people to find another route through Europe.

Make sure you read our application process guide for an overview of what to expect when you apply for an overseas role with the UK.

We take your safety, security and wellbeing seriously. Please watch these videos before you decide whether or not to apply for this job.

Apply to be a paediatrician

Please only apply if you meet all of the requirements below.

I have read and understood the role description, and feel I can fulfil this role

The UK is my place of residence and I have the right to live and work in the UK
Don't have this? Please apply through your nearest MSF office >

I have a valid passport

I have managed a team of people

I am available for a minimum of 9-12 months

I have a Diploma in Tropical Medicine
Don't have this? Find out how to get it >
Apply now >