If you are organising a fundraising event, raising awareness of our work or would simply like to find out more about Médecins Sans Frontières/Doctors Without Borders (MSF), we are happy to send you a free digital copy of any of the films below.

Disclaimer: these films must not be used for commercial purposes. If you are organising a large fundraising event or plan to show the film(s) to a wide audience, please provide details when you request your film copy.

And please note that requests for films will be granted for UK addresses only.

Take a look at the available films below and when you are ready to make your order, visit the following link.

An episode of the high profile Kenyan series ´Daring Abroad´ which visited our project in Old Fangak, South Sudan.

South Sudan is the world’s newest country, and one of its bloodiest. Civil war has left half a million people dead, and forced millions of men, women and children from their homes. But their plight is largely unreported.

This raw and visceral film is a snapshot of life inside one of the world's largest refugee camps, and the often brutal and unforgiving conditions of a country torn apart by ten years of conflict. It follows a team of international and local medics operating under extreme pressures with limited resources as they battle to save lives. They work amidst an onslaught of war-induced injuries and a major humanitarian crisis.

An overcrowded ship with asylum seekers leave Libya bound for Europe – triggering a high-stakes showdown between a Doctors without Borders vessel wanting to escort it to safety and the Libyan Coast Guard fighting to turn it back. As the Libyans issue armed threats, tension grows below deck. With European countries’ responsibilities toward refugees once again in the spotlight, here is an inside view of the desperate hope that is the deadly race for Europe.

Four individuals,  Hassan, Qatada, Joud, Abu Wesam and his children, were all injured during the armed conflicts in their home countries: Iraq, Syria and Yemen. Their lives turned upside down in an instant, today still they bear the physical and psychological scars of their wounds. All have undergone years of treatment at MSF’s hospital in Amman, Jordan. MSF provides a glimpse into their lives before the life-shattering events and their lives today—journeys from injury to reconstruction.

War, emergency, pandemics and hunger. Humanitarian workers are used to working in the most varied and extreme missions and contexts across the planet. However, few of them venture openly into the world of personal feelings. For this film, forty humanitarian workers and their loved ones did just that, speaking without reserve about the risk, the commitment, the first mission, the sense of powerlessness, the encounters, the passion, the return home and the unspeakable things they’ve witnessed.

The documentary 'Restoring Dignity' follows survivors in Nigeria, as they visit a specialised hospital in the city of Sokoto, run by the Ministry of Health and supported by Médecins Sans Frontières (MSF). Over one year, the film follows their journey to heal their wounds and overcome years of isolation.

In the aftermath of the armed conflict in eastern Ukraine, many health facilities and clinics were destroyed in the violence. Several residents continue to live in perpetual fear and loneliness. Filmed in November 2019, (Un)forgotten documents the plight of those left behind, especially the elderly in need of medical assistance. Through MSF’s mobile clinics, this short documentary foregrounds the enduring hardships of a crisis, largely forgotten by the rest of the world. Note: Since 2015, Doctors Without Borders/MSF has provided 120,000 medical and psychological consultations in eastern Ukraine.

Against the backdrop of the Rohingya humanitarian crisis in southeast Bangladesh, the documentary follows Nicholas Papachrysostomou in his role as the head of the Médecins Sans Frontières emergency response.

As recorded by him in his diaries from the field he is accustomed to keeping, he attempts to decipher the personal choices that led him to emergency humanitarian action.

Told through the eyes of an MSF driver in Rustenburg, South Africa, our new short film “Driving Change in South Africa” shows that everyone has a role to play in tackling sexual violence and supporting survivors, especially men.

Lebogang Seketema – known as Lebo – knows the pain and suffering that sexual violence can cause to those who experience it.

When he was a teenager, his nine-year-old sister was raped by a neighbour. However, there was limited access to care back then, and the family chose to put it behind them.

Since 2016, Lebo has worked as a driver in a sexual and gender-based violence project run by MSF in Rustenburg in the heart of South Africa’s platinum mining belt.

A 14-minute mini-documentary about the lives of three MSF patients and how their lives have changed since their injuries sustained during the "Great March of Return" protests.

A documentary made by Evan Williams Productions and shot by Sandy McKee (MSF UK) for SBS Dateline Australia about search and rescue ship Ocean Viking's first rotation in August 2019.

The film follows three characters; Nick from SOS MEDITERRANEE, Luca - an MSF doctor and Yuka, an MSF humanitarian affairs advisor as the ship conducts four rescue missions in four days and then endures a two-week stand-off at sea before the rescued people are taken to Malta.

Follow the incredible journey of Qusay Hussein - a young man who barely survived a suicide bombing in Iraq, rebuilt his life at a Doctors Without Borders hospital in Jordan and is reinventing himself again in America.

Visit three MSF projects across Sierra Leone. The documentary shows the life of three Austrian/German staff. They give a personal insight into their daily work and the challenges they face.

The focus of the documentary is the high child mortality rate within the country as well as the lack of medical staff and how MSF is helping to improve the situation.

Where they need to stand tells the story of four women, of different ages and from different places, who decide to engage in spontaneous solidarity with migrants and refugees. In opposition to the wild rhetoric of an “invasion” and closing up shop, it is people like Elena, Georgia, Jessica and Lorena who provide hope in collectively escaping the problems and tensions caused by the current epoch-making migration, a phenomenon which inevitably brings out the contradictions and injustices in our society.

In Yemen today there is death, suffering and the world's worst humanitarian crisis. In a nation of nearly 29 million, 22 million Yemenis are in need of humanitarian assistance, according to the UN. Yemen's depleted health ministry relies on humanitarian organisations to provide medical care. A mosaic of stories from the forgotten war in Yemen, seen through the eyes of humanitarian operators and civilians, trapped in a life of violence and disease. 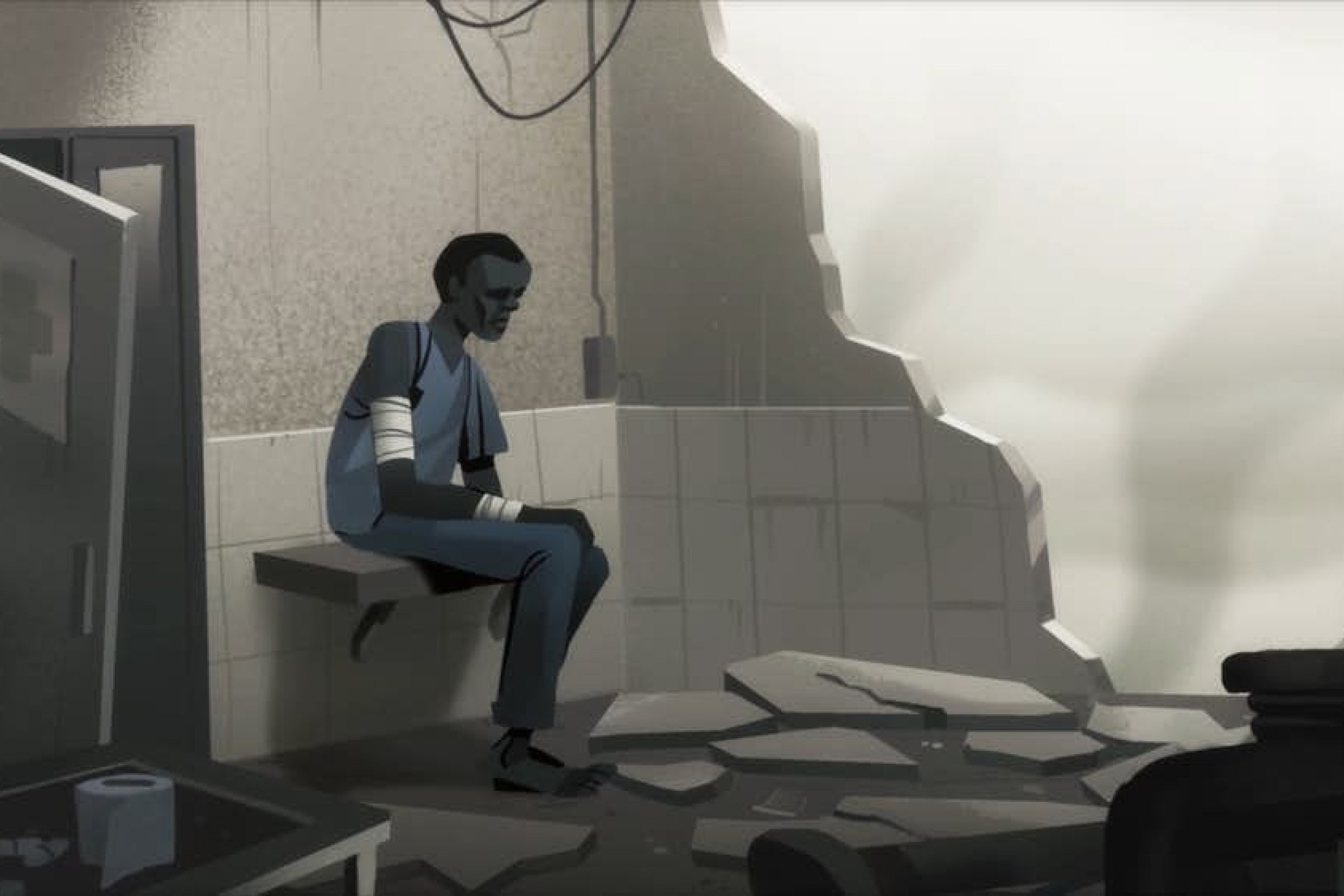 A short animation explaining the devastating effect conflict can have on the health systems of countries, and on the communities affected.

From a Kenyan hospital to a rice paddy in India, victims of venomous snakebites are the faces of death and disability, caught in a global crisis the world knows little about.

Yousra Elbagir visits the MSF Mowasah hospital in Amman, Jordan, where doctors are helping civilian victims of the wars in Syria, Iraq and Yemen with physiotherapy and surgical reconstruction.

She follows the treatment and operations of two Yemeni young men and an Iraqi father, each struggling to cope with their injuries.

Five days and five nights with Doctors Without Borders (2016)

Radio documentary. An NPR team is embedded with an MSF team in Bentiu, South Sudan.

Epsiode one of a two-part BBC series about everyday life in Zaatari refugee camp in Jordan.

Presented by Anita Rani, Javid Abdelmoneim and Ben Timberlake. Javid takes a look at one of the MSF hospitals in the camp that treats trauma victims injured in the war, many with blast injuries and severe spinal damage. He interviews patients and doctors about their rehabilitation process

Documentary investigating the dangers facing MSF medics on the frontline in the wake of a fatal attack on a hospital in Afghanistan.

The Ebola outbreak in West Africa seen through the eyes of the local populations, village officials, aid workers, the sick and those who recovered.

It is a story of fear and frustration, of stigma and disbelief, of grief but also of immense joy and courage.

Panorama reporter John Sweeney follows the journey of refugees from the Greek island of Kos to the Austrian border with Hungary.

In Greece, they visit an MSF project in an old hotel and interview MSF staff member Vangelis Orfanoudakis.

A snapshot of the work MSF is doing all over the world to try and treat drug-resistant TB.

Information film about DR-TB and the problems with current treatments. Interviews with patients, staff and MSF's Access Campaign.

This special episode of Horizon meets the scientists and doctors from all around the world looking for the cure for Ebola and hears first-hand accounts of what it's actually like to catch - and survive - this terrible disease.

It shows the work of MSF in treatment centres in Guinea and Liberia and explores various issues related to treating Ebola patients - fear of healthcare workers, burial practices, etc.

Interviews with MSF staff Cokie van der Velde and Sandra Smiley. It follows the search for a cure, from studying the antibodies of Ebola survivors to the development of experimental drug ZMapp.

The documentary highlights the dangers of Ebola to healthcare workers and how quickly the disease can spread in the age of globalisation.

Panorama spent a month in Sierra Leone with British born NHS doctor Javid Abdelmoneim filming his every moment working in one of our Ebola management centres at the height of the epidemic during 2014.

In this intimate and moving account of the crippling effects of multidrug-resistant tuberculosis (MDR-TB), we follow the journey of victims from two families who battle with the disease over the course of a year.

Treatment can often take much longer and the chances of being cured are very low.

Can't find what you're looking for?

If you are looking for another film, please contact us and we'll do our best to help you.

Get in touch with us