From child refugee to MSF staff: “I promised myself to give something back”

From child refugee to MSF staff: “I promised myself to give something back” 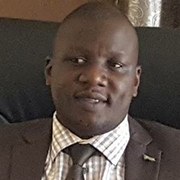 Originally from South Sudan, he made it his life-long ambition to work for MSF after being treated by the organisation when he was a child refugee in Uganda.

He recently returned from his first assignment with MSF, working in Syria.

After his family fled South Sudan, Moses' life was saved by Médecins Sans Frontières / Doctors Without Borders (MSF). Now, having just returned from his very own assignment in Syria, he shares his journey to fulfilling an ambition.

Plumpy’Nut. I hadn’t seen it for decades.

I was in Syria, working with MSF. I was the HR/finance manager, helping ensure that our medical projects had the staff and resources they needed.

Patients in one of the projects were being given Plumpy’Nut, a fortified peanut paste used to treat malnutrition.

I’d last seen it when I was young and malnourished myself when the peanut paste given to my family and me by MSF probably helped to save my life.

The story of how I came to work with MSF is a very long one. I hope I can summarise it.

I'm originally from South Sudan. Before South Sudan was an independent country it was part of Sudan, and there was a protracted war between the southerners and the northerners.

Growing up with constant war, you would see wounded people coming from the frontline. All of us in the primary school were conscripted to do military training. We had to move several times to escape the fighting.

Eventually, the conflict caught up with us again. I remember the sounds of the bombs. The planes overhead. It felt like anyone could be a target.

I was young at that time, in my early teens. My parents made the decision. We had to evacuate, get out of the warzone.

Everyone in our town and the neighbouring villages crossed the border and became refugees.

In Uganda, we were safe from the conflict, but the conditions were harsh.

We were living in the bush, sleeping outside, exposed to the elements, to the rain. We couldn’t protect ourselves from mosquitos, and a lot of people got malaria. There were no latrines at first, so cholera broke out.

People started dying. Especially children. I’m from a large family, and several of my brothers and sisters died.

But guess who arrived? MSF. They were first on the scene. I myself was treated by MSF.

That left a deep impression on me. As I got better, as other organisations arrived and the camp became formalised, as I went through school and eventually university, I kept saying to myself “one day I will work with MSF and pay back the help and generosity I got”.

The journey to MSF

Eventually, our family was resettled. I came to the UK and studied international relations at university. After South Sudan became independent, I returned there and trained as a bank manager.

Then I worked for an international non-governmental organisation that trains politicians in good governance and another one in civic engagement, before working in politics myself. I wanted to serve my community.

“I tell my kids, "I'm working for MSF because they helped me"

I hadn’t forgotten my promise to myself, but I knew that I didn’t want to join MSF while I was politically active. It isn’t compatible with MSF’s policies of neutrality and impartiality.

Later, when the time came for me to move back to the UK, I did a post-graduate degree in HR management to build my skills. Then I finally applied to MSF.

When MSF said I’d matched with a project in Syria, I didn’t hesitate.

I’d seen news programmes about the war on TV and had seen some of the devastation. It’s hard to compare, but I felt what they were going through was in some ways similar to what I’d experienced, or worse.

MSF runs various medical projects in Syria, and I worked on two of them. One provides vital medications and support for people with chronic diseases, and the other treats people with tuberculosis who were in detention.

I was focused on all the administrative aspects that allow a project to run smoothly. This meant a lot of staff recruitment, including working to ensure our practices and policies were transparent for all applicants. We also organised a lot of training and shadowing, building up the skills and confidence of our team.

I was very open with my Syrian colleagues. I told them I was a refugee. That I have lived through a conflict, and I know what it’s like to be displaced. Lots of Syrians escaped the war by leaving the country, but many others have been displaced within Syria.

I wanted to offer some encouragement, some hope. To reassure them that eventually things will become more settled and that they will be able to live happily again.

After I first saw the Plumpy’Nut in the office in Syria, I kept a packet of it on my desk. It reminded me of what saved me, of why we were there.

I’m back in the UK now, and I meant to bring that packet back to show my children. I wanted them to know exactly what it looks like, to say “Without this, I wouldn’t be here to be a daddy to you”

But in all the hurry of leaving, the packet of Plumpy’Nut was the one thing that I forgot. It stayed on my desk in Syria. So instead, I tell my kids, "I'm working for MSF because they helped me."

I’ve now started a new challenge: training to be a Police Officer with the Met Police. But once my initial training is done, I hope to do a new assignment with MSF, and to continue, in a small way, to give something back.

War has raged in Syria for over a decade, killing hundreds of thousands of people, displacing millions more, and causing widespread destruction and suffering.

Civilian areas have been routinely bombed and deprived of assistance, and access to healthcare remains extremely poor in many areas.

Médecins Sans Frontières/Doctors Without Borders (MSF) operates in Syria where it can, but ongoing insecurity and access constraints severely limit our activities and hamper our ability to provide humanitarian assistance that matches the scale of the needs.