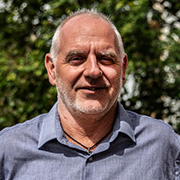 Paul Jawor is a water and sanitation specialist from the UK.

He was worked with Médecins Sans Frontières / Doctors Without Borders (MSF) in Bangladesh, where MSF is providing healthcare to Rohingya refugees, and in the Democratic Republic of Congo (DRC) as part of the response to the 2018 Ebola outbreak.

Paul is a civil engineer with experience in relief, development and commercial work.

In the world’s largest refugee camp, one team has found an innovative way to celebrate new life in the midst of the pandemic. MSF water specialist Paul Jawor shares their story.

It signifies future hope, maybe even miracles, but definitely the impact of one team from the international medical organisation Médecins Sans Frontières/Doctors Without Borders (MSF) in Bangladesh.

The team works in the neonatal intensive care unit in the Goyalmara Green Roof Hospital, run by MSF, on the edge of the largest refugee camp on the planet.

There they look after babies fighting for survival in the critical first 28 days after birth.

“Even in the shadow of COVID-19, new life can be celebrated”

The idea for the mural originally came from a young Canadian nurse who wanted to visualise, for both the staff and the mothers of the sick children on the ward, that there are true successes. Moments we could all celebrate that the seemingly impossible is sometimes possible.

They decided to make a mark on the wall for every newborn child that survived their difficult arrival into the world.

That mark was to be a footprint. One for every baby that got to go home.

A mural to life-saving healthcare

Many of the families who come to the hospital are Rohingya – an ethnic minority group from Myanmar.

In 2017, a violent crackdown by the Myanmar authorities forced hundreds of thousands of Rohingya people to flee for their lives across the border.

Almost a million are now living in overcrowded conditions.

I am not naïve. I know that, sadly, we do not manage to save every child in the ward. Some are beyond our reach.

But every child is treated with the same devotion, care and professionalism.

With every young patient we know that we tried our best and gave care and dignity in a place where those values were sometimes missing.

I have been following this mural for a while now. When I first saw it, working for MSF as a water and sanitation specialist, there were 12 footprints.

As you can see from this photo, there are now hundreds.

So, as our world spins in a vortex of COVID-19, filled with misery and lost opportunities, take a breath and remember this image. The memory of children who have overcome their first hurdle in life, with the help and devotion of MSF staff in Bangladesh.

With every new footprint on the wall, they bring a little bit of hope and happiness to a world where these emotions are drained.

Even in the shadow of COVID-19, new life can be celebrated.

MSF and the Rohingya refugee crisis

In that first month, a concerted campaign of violence was unleashed by the Myanmar authorities against Rohingya people in the country’s Rakhine State. By the end of the year, more than 660,000 people had crossed the border into Bangladesh.

Those arriving in Bangladesh shared stories with MSF about their villages being systematically raided and burnt by the Myanmar military. Mob groups also targeted the Rohingya, with reports of women and children being raped and killed.

The resulting mass displacement of people in this short period of time is the largest of its kind in recent history.