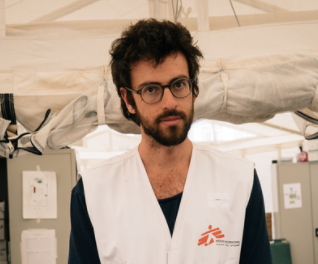 Jonathan Whittall is currently Director of the Analysis Department at MSF.

He manages teams responsible for research, analysis, advocacy and strategic operational support in on the issues of health politics, forced migration, conflict and humanitarianism and negotiated access.

He has previously worked as a project coordinator in Iraq and Lebanon.

Jonathan Whittall argues that the focus on counter-terrorism should not come at the expense of saving lives and alleviating the immense suffering facing the people caught up in the conflict in Cabo Delgado.

Three important developments took place in Mozambique’s Cabo Delgado province in less than six weeks, all of which will have a significant future impact on human lives.

First, in mid-March the United States government designated an armed opposition group operating in Cabo Delgado as a ‘terrorist’ organisation and sent military advisors to train the Mozambique army on counter-terrorism measures.

A fortnight later, the town of Palma – close to a multi-billion-dollar gas project run by the French company Total – was attacked by an armed group in a high profile and brutal assault that killed a still unknown number of people and displaced at least 30,000.

And in early April, the Southern African Development Community (SADC) countries “condemned the terrorist attacks in strongest terms; and affirmed that such heinous attacks cannot be allowed to continue without a proportionate regional response”. SADC deployed a “technical mission” to Mozambique that has recommended the deployment of 3,000 troops from the region.

Much of this recent attention on Cabo Delgado was fuelled by the claims of the opposition groups link to the Islamic State (IS) and the killing of foreigners in the attack on Palma.

While the conflict has been going on since 2017, it has received very little political attention from regional governments or international actors – except those interested in Mozambique’s gas reserves or private military contracts.

Much less attention has been given to the growing number of displaced people – now over 700,000 – and the critical humanitarian crisis facing the province.

Cabo Delgado might not be a forgotten conflict, but it certainly is a neglected humanitarian crisis. And now, with the attention from the SADC region and the Mozambican government’s international backers fixed almost exclusively on ‘fighting terrorism’, the solutions being proposed may once again overlook the urgent need to save lives, and alleviate the suffering, of scores of conflict-affected communities.

Hundreds of thousands of people have fled violence and insecurity and they have ended up living in overcrowded camps or being hosted by local communities with already limited resources.

People have experienced significant trauma: a decapitated husband, a kidnapped wife, a son or daughter from whom they have no news.

Many walk for days to find safety after hiding in the bush, often without food and water. Others remain in locations where humanitarian actors cannot reach because of the ongoing insecurity.

While the reasons for this conflict might be multifaceted and complex, the consequences of the violence are strikingly simple: fear, insecurity and a lack of access to the basic needs for survival, including food, water, shelter and urgent healthcare.

Meanwhile, significant restrictions are placed on the scale-up of the humanitarian response due to the ongoing insecurity and the bureaucratic hurdles impeding the importation of certain supplies and the issuing of visas for additional humanitarian workers.

What does seem set to scale up is the regionally supported and internationally funded counter-terrorism operation that could further impact an already vulnerable population.

In many conflicts, from Syria to Iraq and Afghanistan, I have seen how counter-terrorism operations can generate additional humanitarian needs while limiting the ability of humanitarian workers to respond.

Firstly, by designating a group as ‘terrorists’, we often see that the groups in question are pushed further underground – making dialogue with them for humanitarian access more complex.

Many aid organisations shy away from this in places where a group has been designated as “terrorists” out of fear of falling foul of counter-terrorism legislation.

For Médecins Sans Frontières / Doctors Without Borders (MSF), successfully providing impartial medical care requires reserving a space for dialogue and building trust in the fact that our presence in a conflict is for the sole purpose of saving lives and alleviating suffering.

Falling through the cracks

Yet, counter-terrorism operations try to bring humanitarian activities under the full control of the state and the military coalitions that support them.

Aid is denied, facilitated or provided in order to boost the government’s credibility, to win hearts and minds for the military intervening, or to punish communities that are accused of sympathising with an opposition group.

The most vulnerable can often fall through the cracks of such an approach, which is why organisations like MSF need to be able to work independently.

The reason why humanitarian workers cannot be aligned with a state and its military backers is that often states and those affiliated with them are clear targets of armed opposition groups.

Being aligned to a state that is fighting a counter-terrorism war would reduce our ability to reach the most vulnerable communities to offer medical care.

At MSF we know this can come at a time when we are needed the most. In counter-terrorism wars around the world, we often see civilian casualties being justified due to the presence of ‘terrorists’ among a civilian population.

Entire communities can be considered as ‘hostile’, leading to a loosening of the rules of engagement for combat forces.

It is in these situations that we have often seen hospitals destroyed and entire villages razed to the ground in attacks that fail to distinguish between military and civilian targets.

Communities are often trapped between indiscriminate violence by armed groups and the counter-terrorism response from the state.

The current focus on ‘terrorism’ clearly serves the political and economic interests of those intervening in Mozambique.

However, it must not come at the expense of saving lives and alleviating the immense suffering facing the people of Cabo Delgado.

Situated on Africa’s southeast coast, Mozambique is a scenic country that is resource-rich and biologically and culturally diverse.

However, its nearly 30 million people are still recovering from the effects of a 16-year civil war, and, more recently, a string of natural disasters.

Mozambique bore the brunt of Cyclone Idai, which caused devastation and heavy loss of life in March 2019. Six weeks later, a second storm – Cyclone Kenneth – hit Cabo Delgado province in northern Mozambique. Médecins Sans Frontières/Doctors Without Borders (MSF) has been working in the country since 1984 and responded to both of these natural disasters, as well as the cholera outbreak that followed.

We also treat people with HIV and tuberculosis in Mozambique, which has some of the highest rates worldwide.