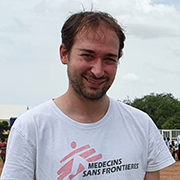 Michael Malley is a paediatrician from the UK. He recently returned from an assignment with Médecins Sans Frontières / Doctors Without Borders (MSF) in Agok, a town in the Abyei Administrative Area between Sudan and South Sudan.

Michael Malley is a doctor who recently returned from an assignment with Médecins Sans Frontières / Doctors Without Borders (MSF) in Agok, a town between Sudan and South Sudan.

Her father laid her carefully on the bed in the emergency room. She was unconscious, barely breathing. The medical team began the assessment immediately. A little girl, around eight years old. They said she’d been having seizures.

Before we’d even done any tests, we all thought the same thing. Malaria.

Malaria is endemic in this region, and in my time as a paediatrician in the MSF hospital in Agok – in the Abyei Administrative Area between Sudan and South Sudan – it was rare for us to have a patient who didn’t have it.

“Seizures can easily be fatal if not stopped in time”

The rainy season creates pools of stagnant water, perfect breeding grounds for the mosquitoes which carry the malaria parasite, infecting people in such high numbers that we’d had to erect tents to act as overflow wards.

A brain in overdrive

The little girl’s family had walked for two days to get to us. They lived in a rural area and we were the only health facility for miles.

This long journey (they’d had to spend a night on someone’s floor until it was light enough to start walking again) meant that she’d been in a critical condition, rapidly deteriorating, for at least 48 hours.

Somehow, one of our nurses managed to place a cannula and we started her on fluids, strong antibiotics, strong antimalarials and antiseizure medicines. She was moved to the high dependency ward, where the sickest children are cared for.

Seizures can easily be fatal if not stopped in time.

During a seizure, the brain is in ‘overdrive’ and doesn’t get enough oxygen or sugar, which can cause brain damage. Another danger is that children can easily stop breathing during a seizure, which can have the same consequences.

All this meant we had to get the seizures under control.

Too severe to survive?

The high dependency team were incredible.

In the UK, where I’m from, this little girl would have been cared for on an intensive care unit, probably intubated, with electronic monitoring. She would have had a CT scan and multiple blood tests to understand what was going on.

None of this was available to the team in South Sudan. All they could do was simple, structured care.

The girl needed many medications at specific times, and each dose was carefully documented so we could get the balance right. She needed round the clock care to ensure she was hydrated and fed through a tube into her stomach. Even simple things like her position in the bed were important for lowering the pressure in her head.

Still, she didn’t wake up.

“Hope is vital, it’s what keeps you going in situations like this. Everyone redoubled their efforts.”

A lumbar puncture confirmed that the child had meningitis as well as cerebral malaria.

We told ourselves that if she got to 14 days in the coma, we would have to accept the possibility that we might lose her.

Sometimes we have to switch the focus from trying to save a patient's life to trying to make them as comfortable as possible, realising that the condition is just too severe for the patient to survive independently.

Suddenly, we were all filled with hope again. Hope is vital, it’s what keeps you going in situations like this. Everyone redoubled their efforts.

All this time her family had been with her. And we had had a lot of conversations with her father, in particular, explaining that even if they wake up from a coma, not all children survive.

Those who do may have very high levels of impairment, while others, with care and a supportive family, would be able to get back to a decent level of functioning.

This little girl’s family were inspiring. The hospital has a physiotherapist, which is amazing for somewhere so remote.

He worked with them with real compassion and skill, explaining how to interact with their daughter to help stimulate her brain to start working again.

At first, she was still super sick, unable to move by herself. Her father would sit with her on his lap, talking to her, lifting her hands as if she was waving at the people on the ward. Her mum and grandmother would get involved.

Together they did more than we ever could.

Gradually she started moving her arms a little, and then her legs. And then one day I came on to the ward and found her father supporting her as she walked with her straight, stiff legs. All the other families beamed as they went by.

It had been less than two weeks since she’d woken from the coma.

A team of teams

As I watched her, I thought about the team who had worked to get her to this point.

There was her family, who had been dedicated throughout. There was the team in the ER who gave her that vital initial care. The diligent staff in the high dependency unit who had literally kept her alive day-to-day.

There were the doctors who treated her convulsions, the lab staff who identified she had meningitis and malaria, the nutritional assistants who provided her special feeds, the physio who worked on her mobility, the counsellor who supported the family.

And none of that direct work would have been possible without the logisticians, the administrators, the myriad support staff, and of course the donors, who make all of those steps possible.

Twenty-eight days after she’d first arrived, the little girl was able to go home with her family. She was walking, eating sweets, smiling.

Malaria is a deadly disease carried by Anopheles mosquitoes.

Every year, it kills around 430,000 people and infects more than 200 million. Ninety percent of these deaths occur in sub-Saharan Africa.

Despite malaria mortality rates falling by 25 percent since 2000, a child in Africa still dies every two minutes from malaria.