In a report released today, MSF once again calls on EU leaders to change their approach to migration and to stop intensifying their dangerous containment and deterrence policies.

These approaches are causing avoidable harm to the health and wellbeing of asylum seekers, refugees and other migrants held in “hotspots” on the Greek islands.

“For more than five years, the EU policy of containing people and processing their asylum applications in hotspots on the Greek islands has created an unprecedented crisis and tremendous human suffering," said Reem Mussa, one of the authors of the report and a humanitarian advisor on migration for Médecins Sans Frontières / Doctors Without Borders (MSF).

"These are not unintended consequences.

“The EU’s hotspot model is designed not only to process migrants’ asylum applications but also to deter others who dare to seek safety in Europe.”

“Despite claiming to change for the better, the EU and the Greek government are spending millions of Euros to standardise and intensify policies that have already done so much harm"

Iorgos Karagiannis
|
Head of MSF in Greece
Tweet this
Whatsapp

The report, Constructing Crisis at Europe’s Borders, shows how the EU’s migrations policies put the health, wellbeing and safety of people trapped on the Greek islands in jeopardy.

People who have survived violence and hardship are stuck in appalling conditions, with a lack of information on their legal status and subjected to harsh border and asylum procedures.

This system has inflicted misery, put lives in danger and erodes the right to asylum.

During 2019 and 2020, MSF mental health clinics on Chios, Lesvos and Samos treated 1,369 patients, many of whom suffered from severe mental health conditions including post-traumatic stress disorder and depression.

More than 180 people treated by MSF had self-harmed or attempted suicide. Two-thirds of them were children, and the youngest was just six years old.

These include living in poor conditions, understanding complicated administrative and asylum procedures, exposure to violence and insecurity, family separation, unaddressed medical needs, and fear of deportation.

The EU plan to intensify dangerous hotspots in Greece

For years, even the most basic life essentials have been neglected on the Greek islands.

MSF and other NGOs have been continuously forced to step in to provide crucial services, from healthcare to water. Between October 2019 and May 2021, MSF teams trucked in over 43 million litres of clean water for people in the overcrowded Vathy hotspot on the island of Samos where the water is unsafe to drink.

Gallery: Fives years of containment on the Greek island 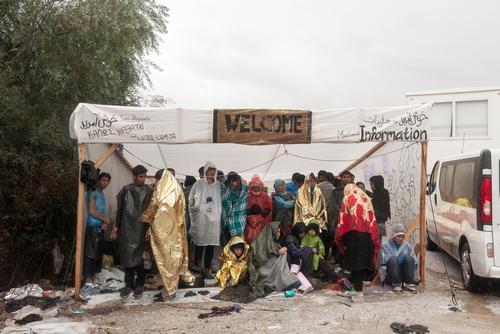 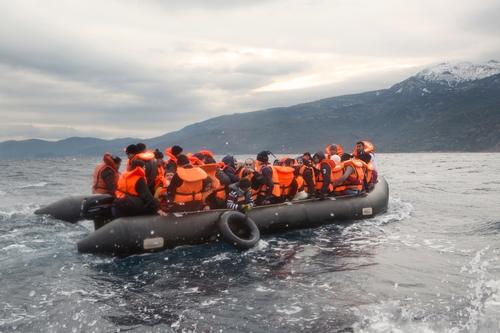 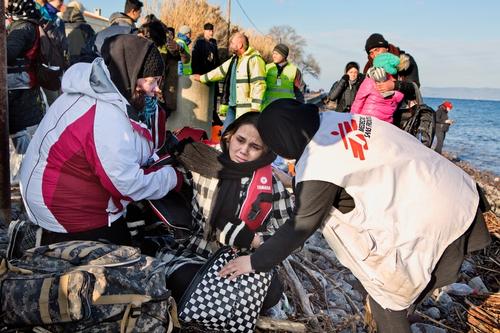 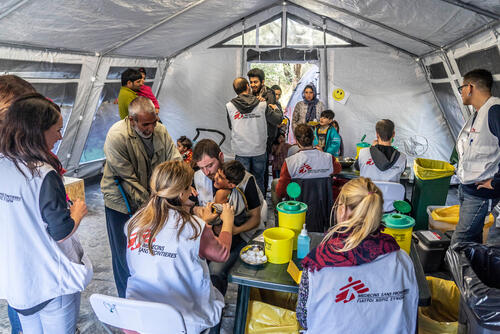 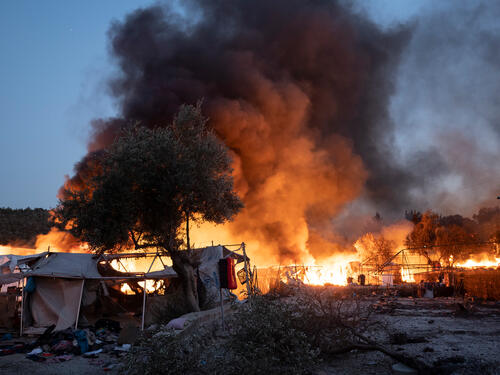 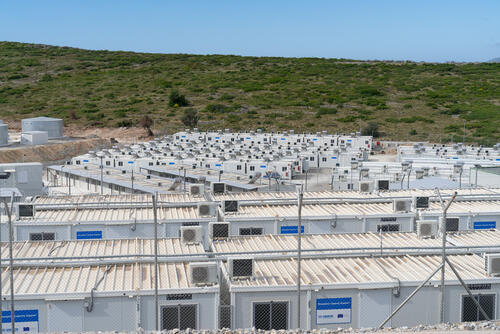 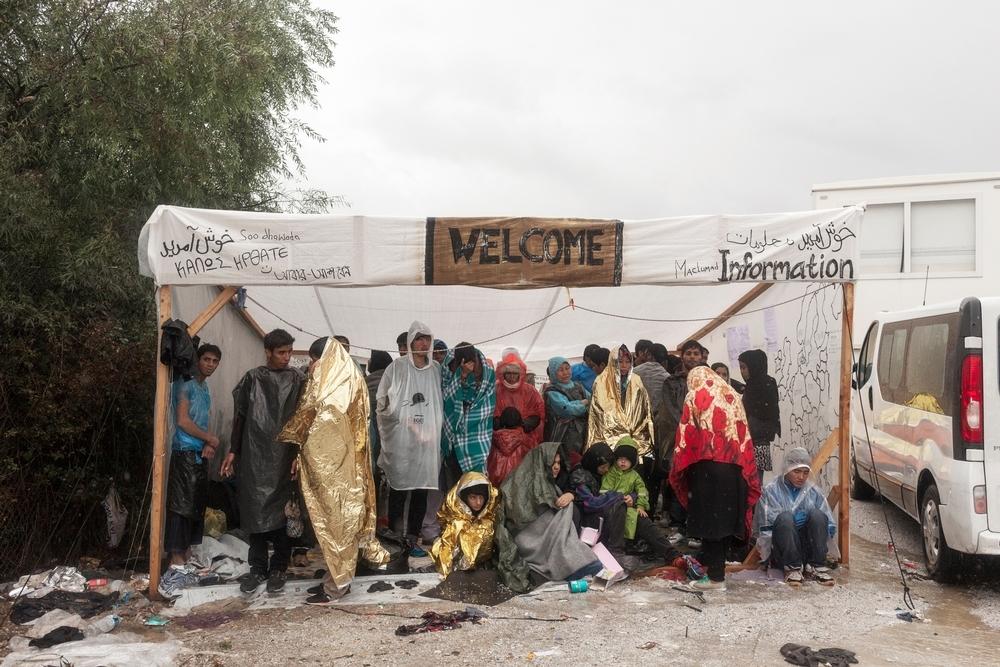 Refugees take shelter during a rainstorm over Moria

October 2015: A group of men, women and children wait outside Moria Reception Centre on the Greek island of Lesbos. They are part of a group of more than 1,000 arrivals without proper shelter, food or water. 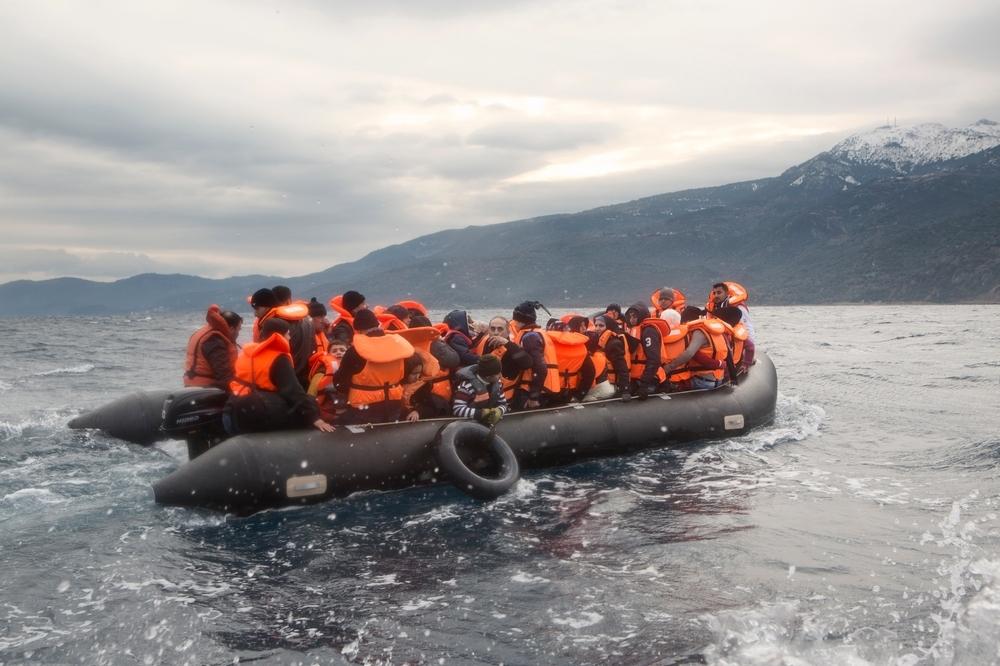 An overloaded boat carrying Syrian refugees is assisted to shore

January 2016: A team from Médecins Sans Frontières / Doctors Without Borders (MSF) help a small boat carrying Syrian refugees to land safely on the shores of Lesbos, Greece. The operations at sea are carried out alongside teams from Greenpeace and the Greek Coast Guard to assist boats in distress. 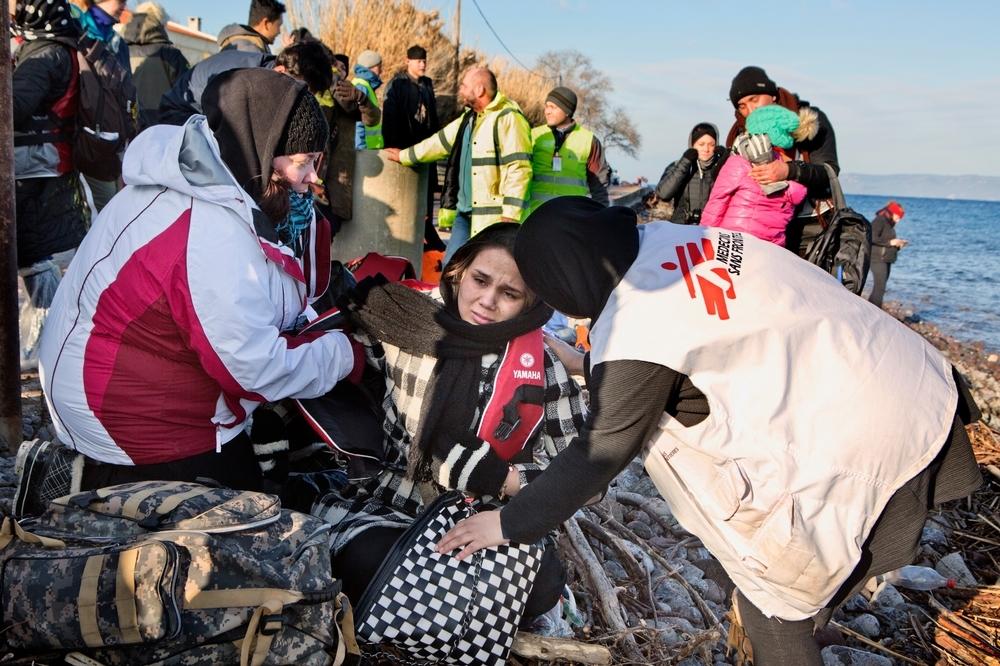 MSF staff treating a young woman on the shore of Lesbos

January 2016: A cultural mediator working with Médecins Sans Frontières / Doctors Without Borders (MSF) cares for a shocked young woman who has just arrived on Lesbos after crossing the Aegean sea. 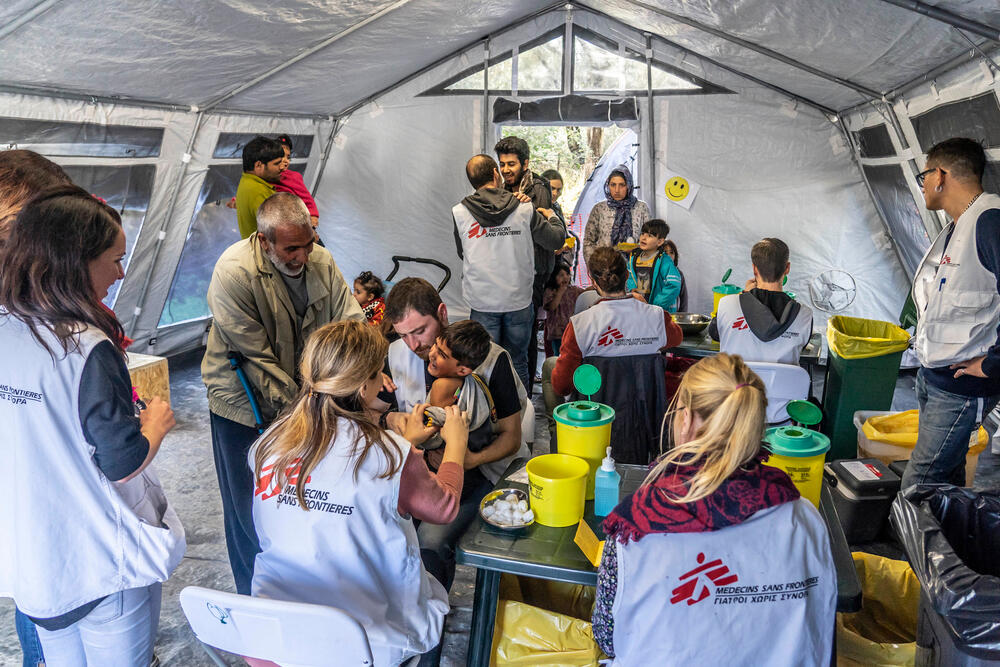 A vaccination campaign on Lesbos

November 2018: An Médecins Sans Frontières / Doctors Without Borders (MSF) team support a vaccination campaign for migrant and refugee children on Lesbos. The campaign reaches 2,000 children living in overcrowded conditions, with limited access to basic sanitation and at risk of disease. 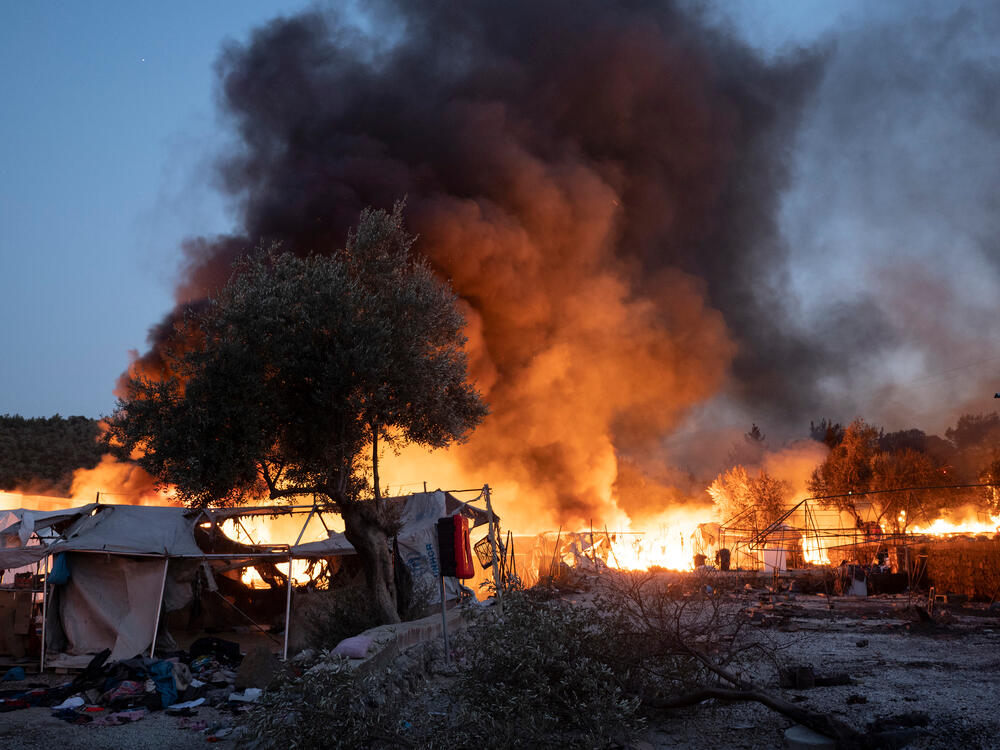 September 2020: One of several fires that swept through Moria camp on Lesbos, destroying much of the dangerously overcrowded reception centre. Thousands of people are left without basic shelter and many lose what little belongings they have. 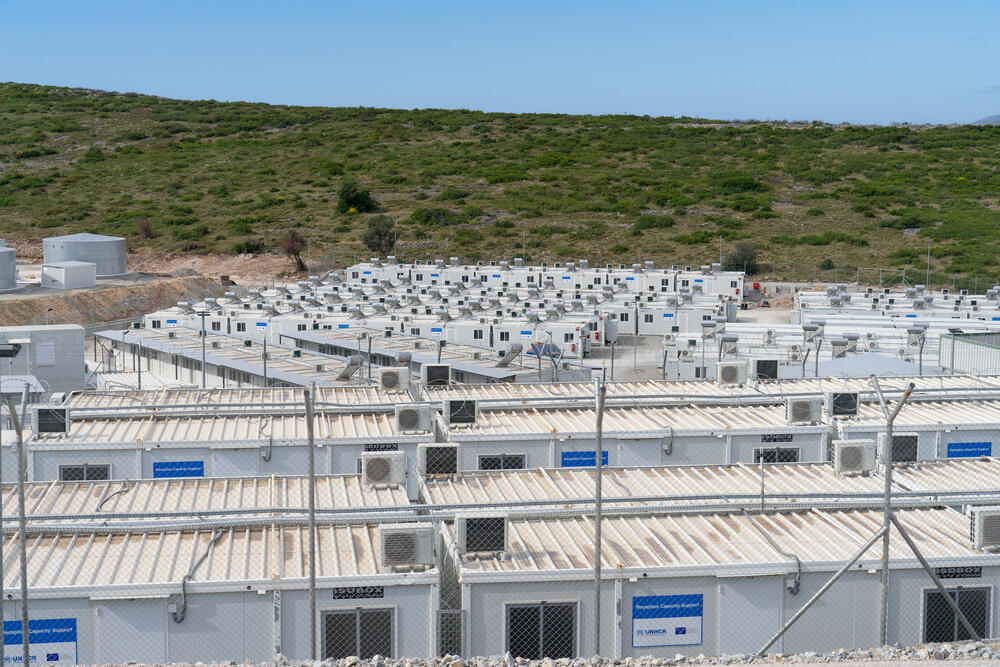 May 2021: A brand-new reception centre being built near Vathy city on Samos island. Located in a remote area, the centre is designed to host up to 3,000 people, including 900 detained and waiting to be sent back to Turkey. Patients and people who live in the current Vathy reception centre describe it as an open-air prison.

“Despite claiming to change for the better, the EU and the Greek government are spending millions of Euros to standardise and intensify policies that have already done so much harm,” says Iorgos Karagiannis, Head of MSF in Greece.

“Shockingly, Lesbos' Moria hotspot, which was not only dysfunctional but deadly, is now the blueprint for a new prison-like centre on Samos. The new facility is in a remote, exposed area of the island and will hold people in shipping containers, surrounded by barbed wire, with controlled entry and exit.

“This cannot be sold as an improvement in people’s living conditions. Instead, it will continue to cause a degradation in people’s mental health, a further protection crisis and will make the suffering of those trapped on the Greek islands even more invisible.”

A call for compassion

The EU and Greek Government are intensifying the crisis by planning these new Multi-Purpose Reception and Identification Centres (MPRICs) in several remote locations on the Greek islands. The restrictive centre already being built on Samos may be operational in June 2021.

“It is not too late for compassion and common sense,” summarises Mussa.

“The EU and its member states should end polices of containment and ensure people arriving in Europe have access to urgent assistance, facilitate access to protection and relocation to safe reception and integration in communities across Europe."

An unprecedented 79.5 million people around the world have been forced from their homes. The reasons vary, but violence and conflict; natural disasters; or extreme weather events can all mean that it is no longer safe to stay where you are.

Twenty-six million of these displaced people are refugees: people who have had to travel to a new country to find safety. Worldwide, over half of refugees are under the age of 18.