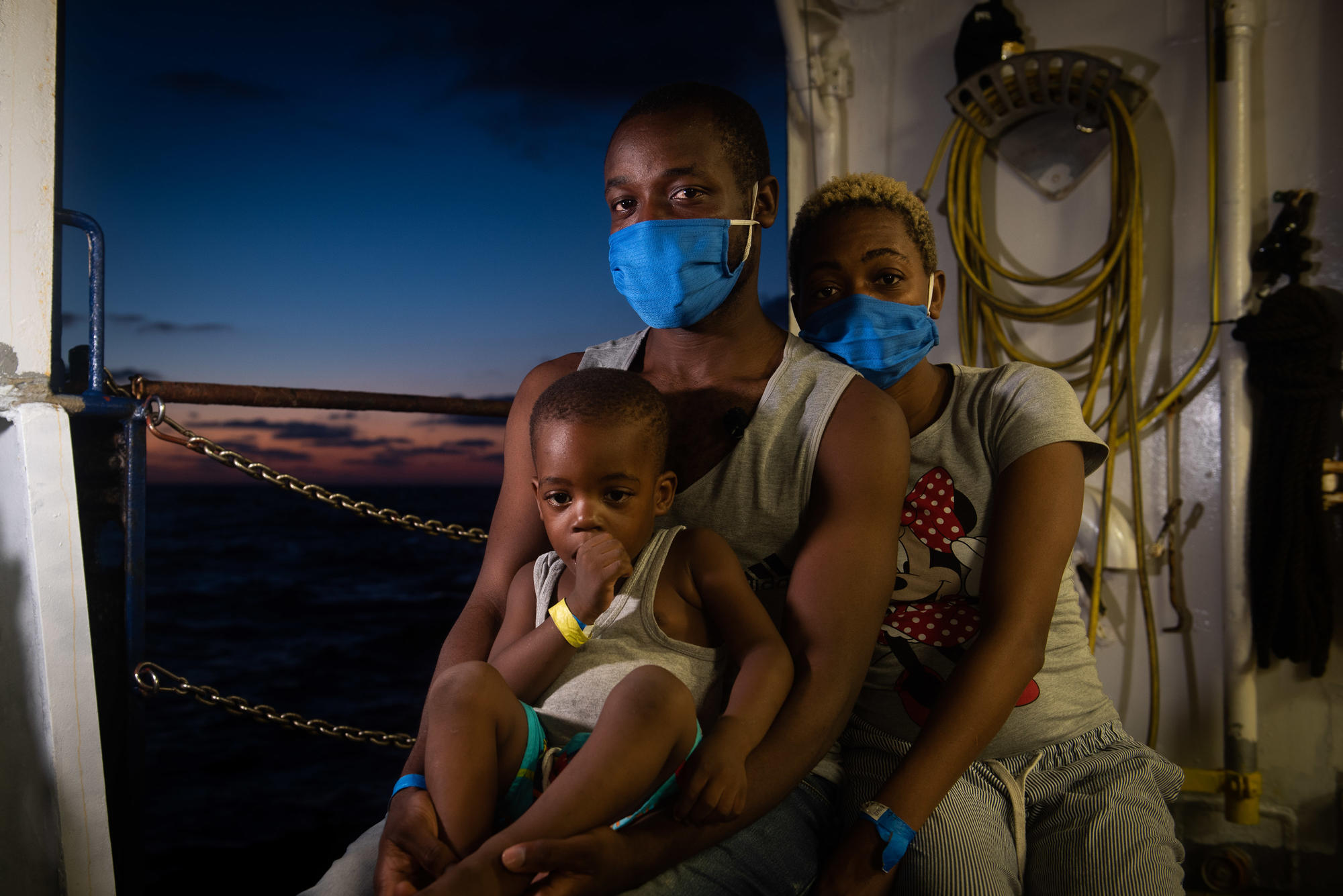 Caption
Souleman from Cameroon with his wife and child on the weather deck of the Sea-Watch 4, 27 August 2020.
© Chris Grodotzki / Sea-Watch.org

Since 15 August, Médecins Sans Frontières/Doctors Without Borders (MSF) has been working on board the search and rescue ship Sea-Watch 4, run by Sea-Watch.

On 1 September, 11 days after its first rescue, Sea-Watch 4 has been allocated a port of safety in Italy. The ship is now en route to Palermo to disembark 353 people.

"The situation at sea is dire. In the last 11 days, we have witnessed how European states are condemning people to drown and blocking action to save them.

Nearly 400 people have died in the central Mediterranean Sea in 2020. It’s hard to understand how this can be allowed to happen. But it does.

Just two weeks ago, 45 people lost their lives in a shipwreck. Just a few days ago, people crowded onto a rubber dinghy saw four of their group drown. Nearly 400 people have been left stranded awaiting a port of safety, some for days, some for weeks.

Twenty-seven people were rescued by a commercial oil tanker, the Etienne,  on the orders of Malta. They have been left to languish for nearly four weeks.

Only one body was recovered; the others, like so many thousands before, were lost to the waves

This is the result of deliberate policies to not save lives. In recent months, despite receiving distress calls from rubber boats in their own search and rescue regions, Malta and Italy have been ignoring calls, and delaying rescues, in areas of the Mediterranean sea that fall under their responsibility. But, they are not the only EU states looking the other way.

The failure of states has forced non-governmental organisations (NGOs) to try to fill the gap, setting up search and rescue operations. But, thanks to the impounding of ships and unclear administrative blockages, hardly anyone can be at sea right now.

Currently, only Sea-Watch 4 and the Banksy-funded Louise Michel are the only search and rescue vessels active in the central Mediterranean. 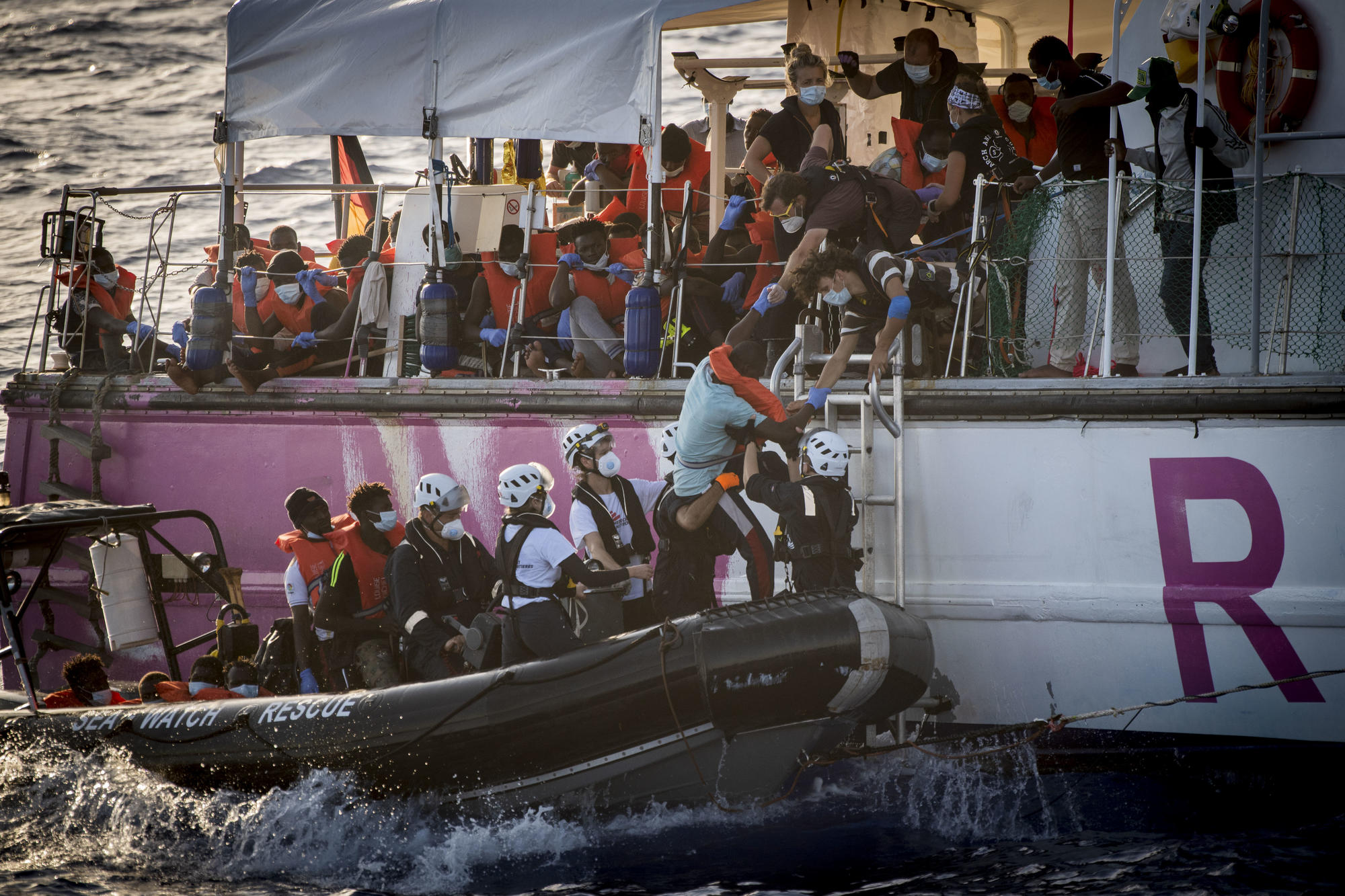 Caption
On 29 August, 145 rescued people were transferred from MV Louise Michel to Sea-Watch 4.
©

Since returning to sea we have been consistently confronted by states, chiefly Malta and Italy, using dirty tactics, ignoring distress calls and passing the buck to others, such as commercial ships or NGO search and rescue ships.

We carried out our first rescue within hours of arriving in international waters, off the coast of Libya on 22 August. This was followed by two more rescues in the following days. Despite repeated requests for a place of safety, we were not offered one.

Unbelievably, states are now instructing commercial and NGO vessels to assist in rescues and then refusing to provide a port of safety. Last weekend, (29-30 August) Malta instructed the Sea-Watch 4 to transfer rescued people from the Louise Michel.

The Maltese maritime authorities then proceeded to ignore our calls.

With so many people in such a confined space, tensions run high. You can only imagine how difficult the situation is; especially as we try to implement strict COVID-19 protocols on board.

Many people are highly traumatised. People transferred from the Louise Michel have witnessed four people drowning.

Only one body was recovered; the others, like so many thousands before, were lost to the waves.

And then on top of this is the anguish and anxiety of not knowing what will happen next. These states are toying with people’s lives; it is cruel in the extreme.

Alongside seasickness and dehydration and scabies, we see chemical burns. This result from a toxic mix of petrol and seawater. One rescued person, a teenager, was so badly burnt that we had to arrange a medical evacuation.

Our teams are also treating broken limbs and trauma injuries consistent with reports of abuse and torture and ill-treatment in Libya.

We implement strict COVID-19 protocols, so we are paying particular attention to anyone with possible symptoms, such as a cough or high temperature. And ensuring they are isolated. Both the crew and rescued people are vigilantly hand washing and wearing face masks. 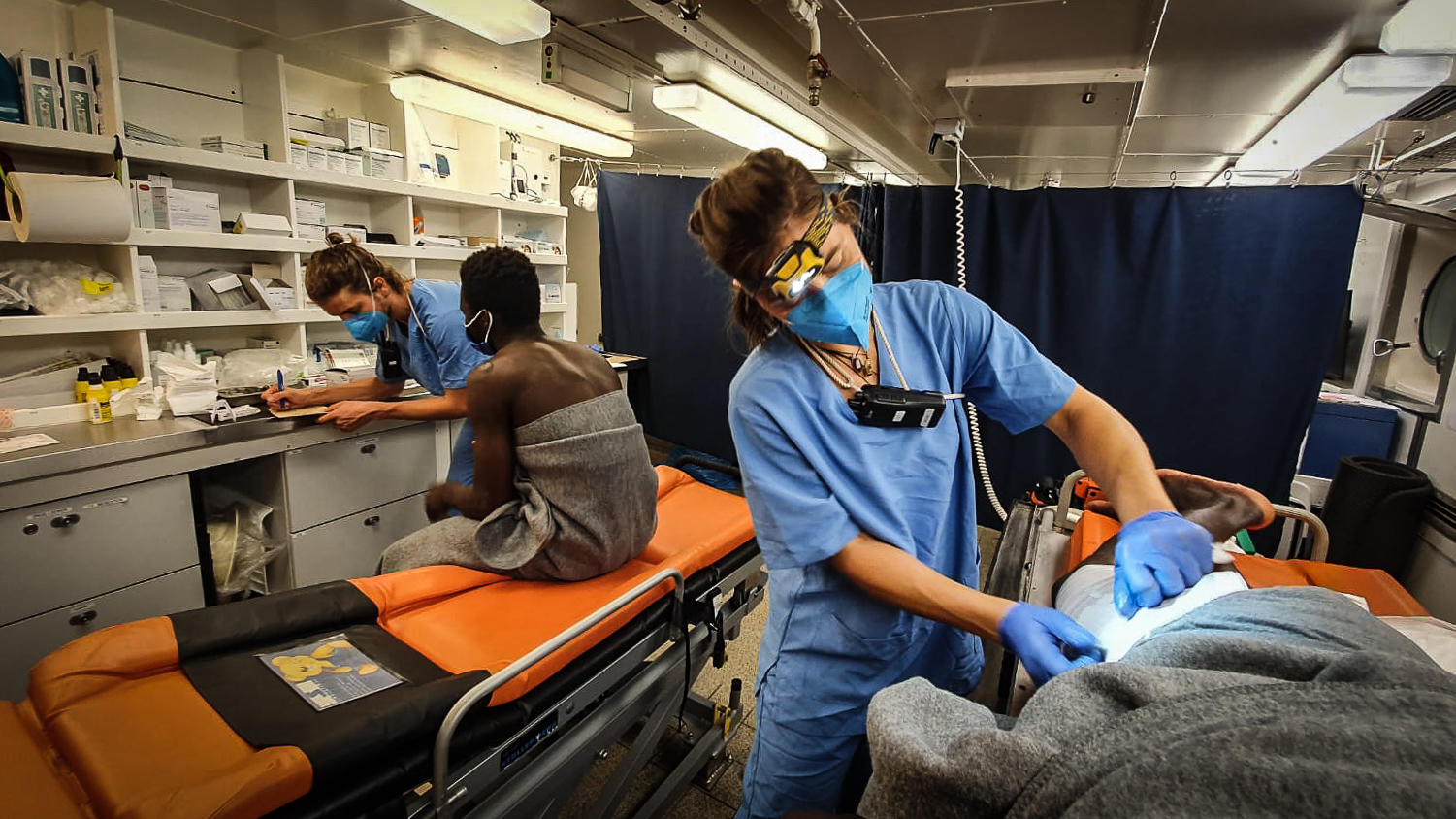 All EU states share responsibility. Those states looking the other way are failing to assist Italy and Malta, who are at the forefront. Italy, for example, has been left virtually all alone in responding to the hundreds of migrants, refugees and asylum seekers who have arrived in the port of Lampedusa in recent months.

When it comes to a port of safety, it should be the closest safe place where the authorities would then assess people’s needs for protection.

That was why – despite the generous offer – we could not travel for days to disembark people at the port of Marseille. What France, and other European states, can do is to reach out to Italy to offer to relocate some of the rescued people.

People cannot be returned to Libya

Libya is absolutely not a place of safety – this fact has been reiterated by the UN High Commissioner for Refugees (UNHCR) and the International Organization for Migration.

MSF runs projects in Tripoli, Misrata, Zintan and Beni Walid. In these places, we see the direct impacts of the abuse migrants, refugees and asylum seekers endure not only in detention, but also in the hands of traffickers. This includes torture and other ill-treatment, forced labour and extortion.

These cruel stand-offs at sea must end. No ifs, no buts. This is entirely possible with state-led search and rescue capacity.

A recent major shipwreck off the Libyan coast took at least 45 lives. Our teams met some of the survivors after they were taken back to Libya. Their stories are harrowing.

We fear that the attention that has been paid to rescues by NGOs may provide a smokescreen. Why? So that people don’t ask questions about the nearly 8,000 people that have been intercepted and ‘pushed back’ to Libya by the EU-supported and trained Libyan Coast Guard since the beginning of the year.

What is striking is how we once again witness a human-made disaster, a policy-induced one. European states must take responsibility. Italy and Malta are failing to meet legal obligations to rescue people or to allocate a port of safety and appropriate assistance.

But, let’s also be very clear, the responsibility for this does not rest upon these two countries alone. Every European state has a role to play; to offer concrete solutions to share the responsibility and establish an appropriate search and rescue mechanism at sea.

The moral and legal imperative to save lives must prevail. European states must deploy adequate search and rescue capacity at sea and respond to distress calls.

These cruel stand-offs at sea must end. No ifs, no buts. This is entirely possible with state-led search and rescue capacity and cooperation for a predictable and sustainable mechanism to disembark rescued people in the nearest place of safety.

MSF in the Mediterranean area

Every year, thousands of people fleeing war, persecution and poverty at home attempt the treacherous journey across the Mediterranean. Countless lives are lost on the way.

Closing safe and legal options for people to reach Europe pushes them further into people smugglers' networks. In Libya, the detention of migrants and refugees is a thriving enterprise of kidnapping and extortion.