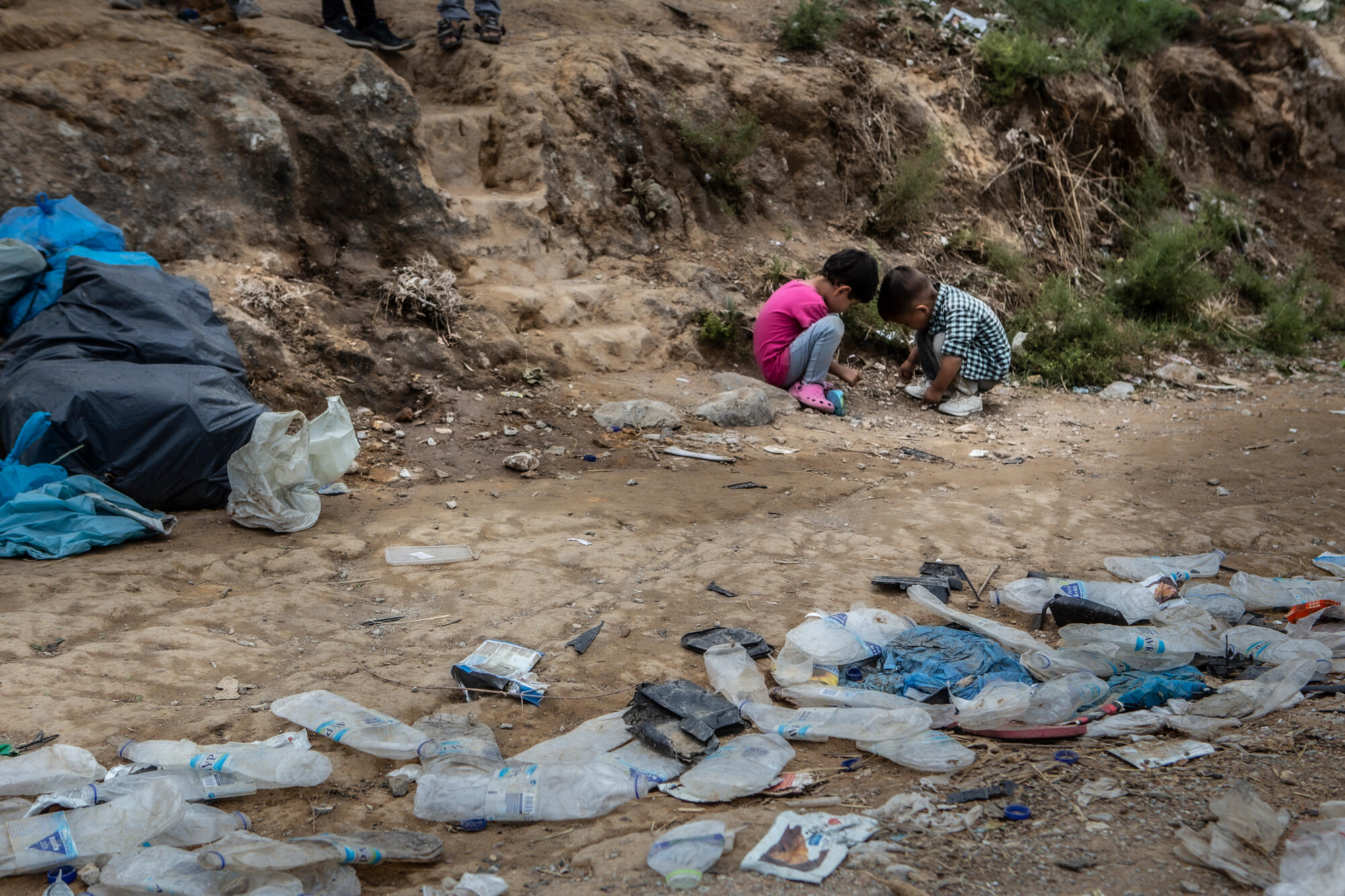 Caption
Two children play among rubbish in the area known as 'Olive Grove' next to Moria camp on Lesvos.
© Anna Pantelia/MSF

A child has died and thousands of people are trapped near the Greece-Turkey border as the Greek government, backed by the European Union, ignores basic human rights and criminalises the act of seeking asylum.

On 27 February, Turkish authorities announced that people would no longer be stopped from leaving Turkey to reach Europe.

In response, the Greek government declared a state of emergency, reinforcing its border with police, army and special forces, and seeking greater support from the European Border and Coast Guard Agency, also known as Frontex.

Those trying to cross the land border in northern Greece were met with tear gas and gunshots, while in the Aegean Sea, a child died in a shipwreck off the coast of Lesvos.

Now more than ever, people who are looking to Europe for protection from violence, conflict or extreme hardship find anything but safety.

Here are five things you should know about the Greek refugee crisis.

On 1 March, the Greek government introduced emergency measures, which included temporarily suspending the right to apply for asylum for people entering the country, speedy deportations of new arrivals without registration, and reinforcement of the border through the deployment of additional military and security personnel.

This was reinforced a couple of days later when the European Commission president Ursula von der Leyen called Greece the “shield” of Europe after announcing that Greece will receive an extra €700 million for border management, infrastructure and stepping up returns.

"This past week, the Greek government and EU leaders have been more concerned with border control than the protection of human lives. Last week, MSF teams in Lesvos met people who reported being stranded at sea for 16 hours, repeatedly attacked by masked men who tampered with the boat... as coastguard forces simply watched on."

The government has said that families will not be separated, so children will also be detained. People who arrived to the Greek Islands after this date have been contained in the islands’ ports with no access to basic services, waiting to be sent to detention facilities to be processed for deportation.

These are some of the most restrictive and punitive measures against people seeking protection in the world; essentially the new emergency measures have criminalised those seeking asylum in Greece, denied them any pathways to protection, and may ultimately push people back into harm’s way.

“This past week, the Greek government and EU leaders have been more concerned with border control than the protection of human lives”, said Reem Mussa, MSF’s Humanitarian Advisor for Migration.

“Last weekend MSF teams in Lesvos met people who reported being stranded at sea for 16 hours, repeatedly attacked by masked men who tampered with the boat, making dangerous sea crossings even more treacherous, as coastguard forces simply watched on.

"In Samos, MSF health promoters met people separated from their family members, they reported harassment and threats from Greek coastguards, allegedly pointed a gun at a boat full of children, women and men.

“Not only are these reports extremely concerning, but the lack of scrutiny from EU leaders is also deafening. All measures need to be immediately taken to put an end to violence against migrants and refugees.”

On 3 March, the European Union’s most senior leaders flew over the Greek-Turkish border in a military helicopter. President von der Leyen stated that “our priority is making sure that order is maintained at the Greek external border, which is also a European border”.

Initially, there was no denunciation or concerns expressed on the escalation of violence, the suspension of asylum and calls for basic protection of people at the border.

Instead, the European Commission has deployed Frontex’s Rapid Intervention Team along with additional border guards, vessels, helicopters, and equipment, as well as financial assistance for migration management.

The EU's most basic democratic values are vanishing - the respect for human dignity, and fundamental refugee rights. pic.twitter.com/b1LGfVRvJP

Following widespread criticism of the EU’s silence, President von de Layen stated that it was crucial to ensure “the individual right to ask for asylum is respected”. However, Greece’s emergency measures are still in place.

On 9 March, EU leaders met with Turkish President Recep Tayyip Erdoğan, where they reinforced their commitment to the EU-Turkey deal, which seeks to control the crossing of migrants and refugees from Turkey into Greece.

Once again, the EU is insisting on fixing a deal that has not only proved to be unstainable but also harmful. There is nothing in this deal, that can be fixed.

3. Asylum and reception systems can't cope with huge numbers of migrants and refugees – and EU migration policies are to blame

This situation is, in fact, a consequence of decisions made back in 2016 when the European Commission agreed to provide Turkey with €6 billion to keep Syrian refugees in Turkey.

For those who managed to reach Europe’s shores, they would be contained on five Greek islands, called “hotspots”, to be processed under very strict asylum rules mostly aimed at returning them to Turkey or their home country.

European leaders’ focus on border control, deterrence and containment has undermined the development of functioning asylum and reception systems, relocation of people beyond Greece and the provision of medical assistance to those in need.

This has caused immense human suffering. 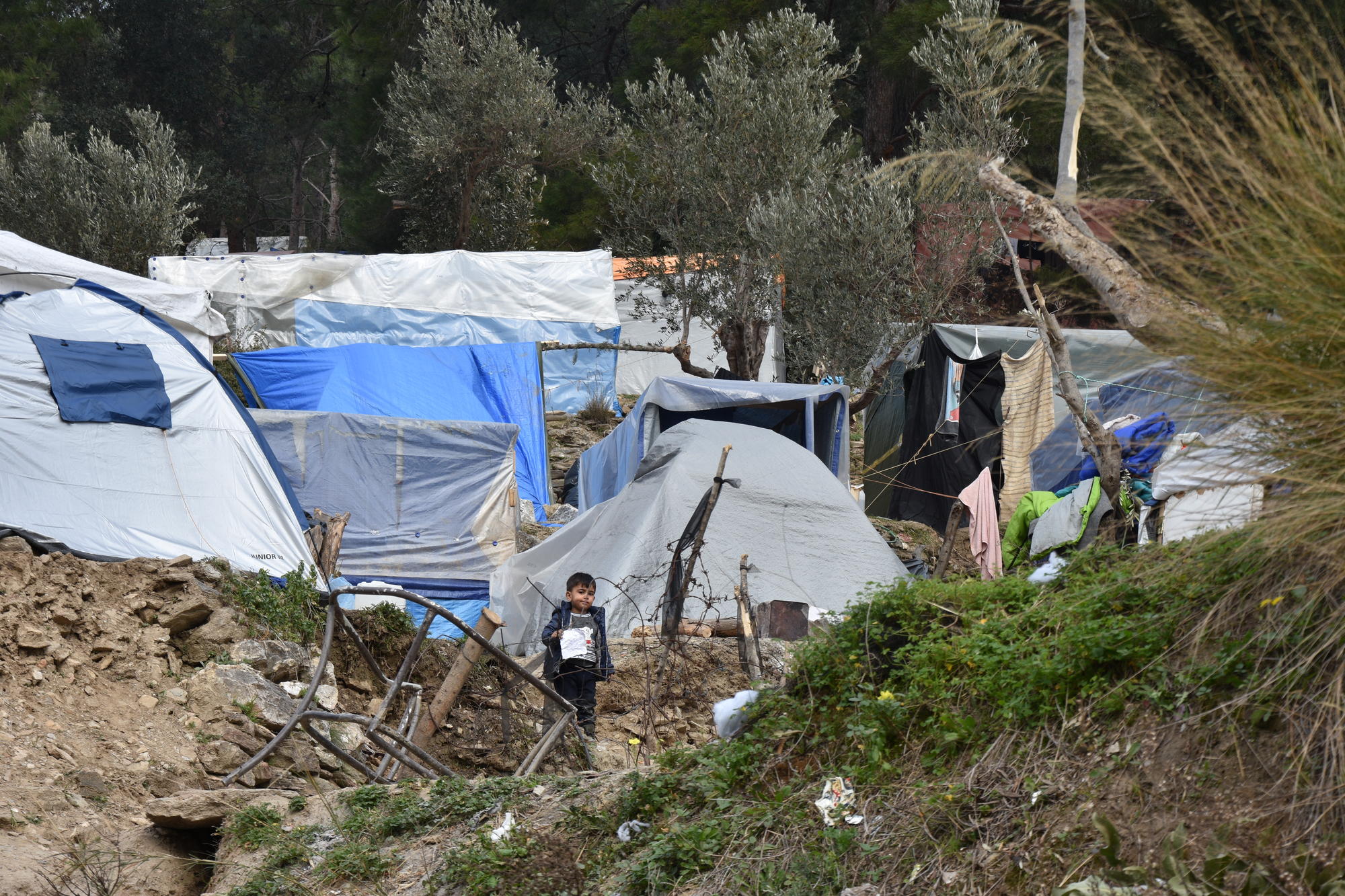 Caption
About 8,000 people live in the overcrowded Vathy refugee camp on the island of Samos, which was built to accommodate only 650 people.
©

For years, MSF has regularly highlighted the structural violence and humanitarian consequences of this deal on people seeking protection trapped on the Greek islands. We have seen the devastating physical and mental health consequences of indefinite containment and unfair procedures.

Currently, more than 40,000 people are trapped in five island reception centres made for no more than 6,000 – that is almost 600 percent over capacity and conditions are horrible.

More than a third of people trapped on the islands are children and yet little has been done to address this crisis.

OUTPATIENT CONSULTATIONS BY MSF IN GREECE IN 2019

INDIVIDUAL MENTAL HEALTH CONSULTATIONS BY MSF IN GREECE IN 2019

ROUTINE VACCINATIONS BY MSF IN 2019

4. Tens of thousands of people rely almost completely on humanitarian organisations such as MSF

After four years of neglect, it is clear that people seeking asylum and communities on the Greek islands have been abandoned by European policymakers.

After the Greek Government announced the creation of new closed centres on the Greek islands rather than evacuating people from existing Reception and Identification Centres, local tensions reached a breaking point, which in turn led to riots, roadblocks, arson and xenophobic attacks on asylum seekers and those providing them with assistance.

“We are concerned about the violent incidents that have taken place,” said Marco Sandrone, MSF Project Coordinator in Lesvos.

“Many organisations have had to scale down or leave the island. We find ourselves negotiating access to be able to provide care. Disruptions to our medical activities mean that that children in Moria will have decreased access to medical care, mental health patients and patients with chronic conditions may not be able to receive their medication, putting an already vulnerable population even more at risk.”

In Lesvos, some volunteers providing essential support for people rescued at sea and those living in Moria Reception and Identification Centre have had to leave the island because of the violence.

As for MSF, teams are constantly evaluating the security situation and adapting their activities. MSF and other organisations continue to provide the bulk of assistance, including primary healthcare for children and other vulnerable people in the hotspots on Lesvos and Samos islands.

If organisations are forced to leave the island or scale down their activities, the impact on people seeking asylum will be devastating, potentially leaving 20,000 people with little to no humanitarian assistance.

5. Changing EU migration policies and urgently evacuating people on the Greek islands is the only solution

The European Union migration policies are the cause of the deteriorating situation in Greece. Criminalising and demonising those looking to Europe for protection will not solve it.

Europe must address the real humanitarian crisis on the Greek islands; more than 40,000 people are living in slum-like conditions, many denied medical care for severe chronic illnesses or mental health conditions. They must be evacuated now.

The EU must adopt policies that protect human lives and minimise health and humanitarian risks. The migration of people seeking safety and a better life across borders is a reality.

EU migration policies must uphold human dignity. A common EU asylum system must be facilitated, along with the reinforcement of protection pathways and the provision of accessible and adapted health services.

These are human beings we are talking about. Not numbers to be tallied, commodities to be traded, or threats to be driven back into the sea.

In 2019, nearly 75,000 migrants and refugees from countries such as Syria and Afghanistan arrived in Greece. Men, women and children continue to make the journey in search of safety or to reach other destinations in Europe, only to find themselves stranded indefinitely.

As well as providing medical and mental healthcare to migrants and refugees on the Greek islands and in Athens, MSF continues to call for vulnerable people to be evacuated and policies of containment to be replaced by sustainable, humane solutions.