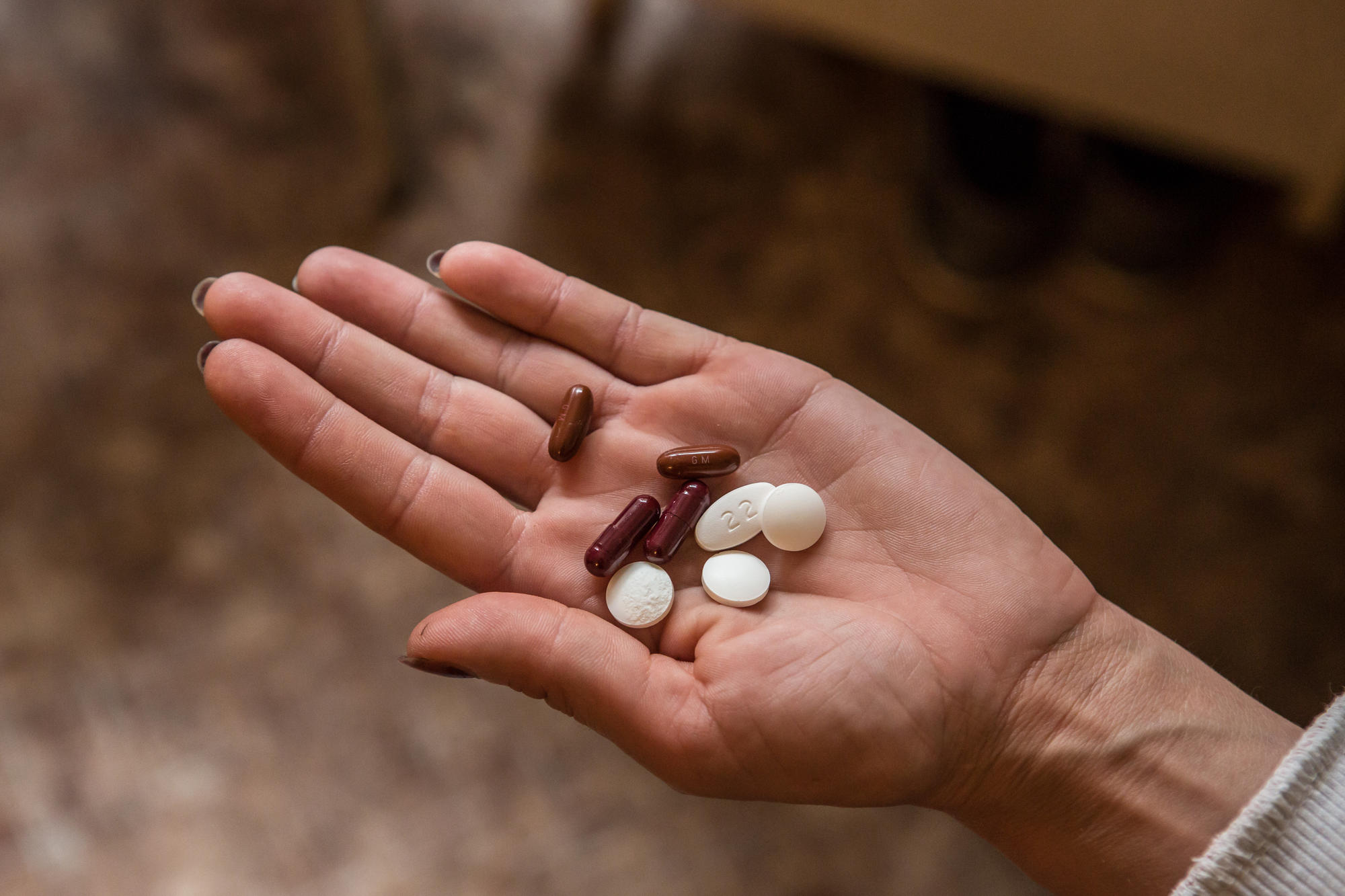 Caption
In Zhytomyr, Ukraine, MSF introduced new oral drugs that are recommended by the WHO, including bedaquiline. These new drugs are essential for patients who have developed resistance to most of the older ones. Zhytomyr region has one of the highest rates of TB in Ukraine.
© Oksana Parafeniuk

MSF is today calling on pharmaceutical corporation Johnson & Johnson (J&J) to drop the price of its anti-tuberculosis medicine to US$1 per day for those who need it.

This would allow greater access to drug-resistant TB (DR-TB) treatment and reduce deaths.

MSF demands this price cut considering the joint contributions made in the development of thd drug, bedaquiline, including by MSF itself.

"Those who contributed to bedaquiline’s development should have a say in how the drug is priced.

"We’re calling on J&J to price bedaquiline at no more than $1 per day so that it can be made available to all people with drug-resistant TB," said Sharonann Lynch, HIV & TB Advisor for MSF’s Access Campaign.

"We will not back down until the price of bedaquiline is brought down,” she added. 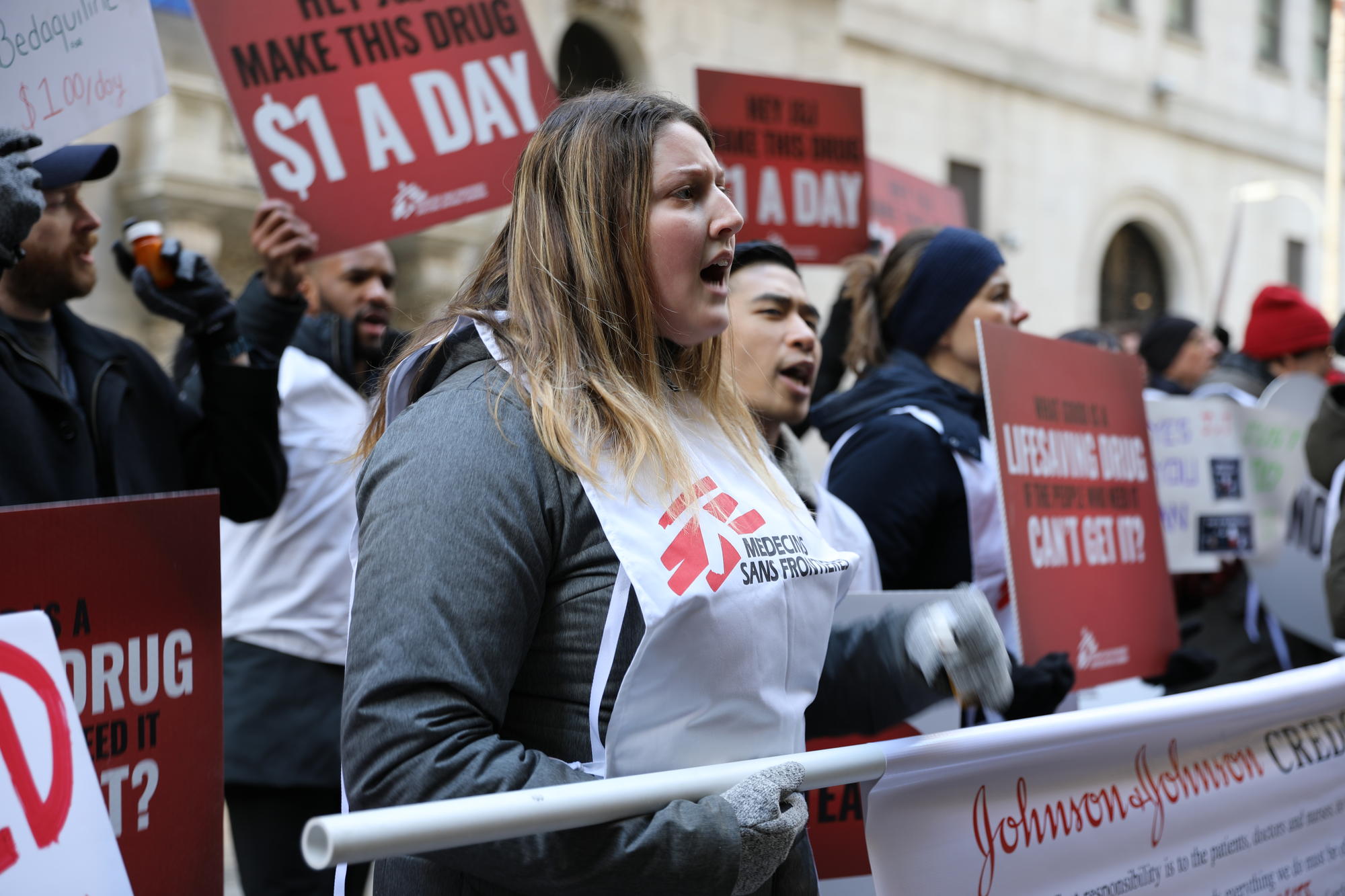 Caption
On 22 January, 2020, MSF protested outside the New York Stock Exchange in New York, demanding Johnson & Johnson make the tuberculosis drug bedaquiline available for all people with drug-resistant TB for no more than a dollar a day. The same day, J&J released its 2019 fourth-quarter earnings, citing sales of US$20.7 billion worldwide.
© Negin Allamehzadeh

Reaping the rewards of outside support

Bedaquiline was developed with considerable taxpayer, non-profit and philanthropic support.

Much of the critical work to inform the use of the drug and demonstrate its therapeutic value was conducted by the TB research community, health ministries, and treatment providers including MSF, and was financed by taxpayers and other donors.

After switching to bedaquiline, my health improved much faster - I wouldn't wish anyone to go through what I experienced.

Despite this joint research and development effort by the global TB community, J&J alone owns the patent on the drug in many countries and has sole rights to determine in which countries the drug will be sold.

Moreover, J&J also benefited from a significant financial windfall as it obtained a Priority Review Voucher from the US Food and Drug Administration (USFDA), that can be used to get accelerated marketing approval for another of its drugs, or can potentially be sold for hundreds of millions of dollars.

If priced at $1 per day, the cost of bedaquiline would be $600 per person for the 20 months of treatment that many DR-TB patients require.

In comparison, the lowest price J&J charges today for 20 months of bedaquiline is nearly double this at $1,200 ($2 per day) in countries eligible to purchase through the Global Drug Facility (GDF), a TB drug and diagnostic procurement mechanism, operating out of a UN agency.

Meanwhile J&J charges other countries that are not eligible much more. This high price affects the scale-up of the drug in many countries struggling with DR-TB epidemics, considering that bedaquiline is just one of multiple drugs required in treatment regimens.

This is despite researchers from the University of Liverpool calculating that bedaquiline could be produced and sold at a profit for much less – as little as 25 cents per day if at least 108,000 treatment courses were sold per year.

Help us deliver medical aid where it's most needed

“Bedaquiline saved my life. I was experiencing a lot of side effects during my previous treatment which included drugs that need to be injected,” said Noludwe Mabandlela, who was treated for multidrug-resistant tuberculosis (MDR-TB) in Khayelitsha, South Africa and was cured in early 2019.

“After switching to bedaquiline, my health improved much faster. I wouldn't wish anyone to go through what I experienced. Pharmaceutical corporations like J&J should stop inflating the price of the drug that offers a lifeline to people affected with drug-resistant forms of tuberculosis.”

Bedaquiline is one of only three new TB drugs to be developed in over half a century (the others are delamanid and pretomanid).

The previously recommended DR-TB treatment regimens used by most countries required people to take as many as 20 pills a day for up to two years and endure painful daily injections and severe side effects ranging from psychosis and persistent nausea to deafness.

Bedaquiline is proving to be a gamechanger, giving those people with DR-TB who can access it a better chance to be cured, without the toxic side effects.

Based on data generated by the TB community showing improved treatment outcomes in people who received bedaquiline, the World Health Organization in 2018 recommended bedaquiline be used as a core part of an all-oral treatment regimen, replacing the injected drugs.

Increased use of bedaquiline has already shown benefits, even among people more likely to have poorer treatment outcomes, including people living with HIV, and people with pre-XDR-TB and XDR-TB.

For example, in Belarus, among 244 people who were treated with bedaquiline – 96% of whom had either pre-XDR-TB or XDR-TB – the treatment success rate increased to 87%.

“We have seen so many patients go deaf, lose their jobs or lose their lives because they had no option other than the excruciating TB drugs that had to be injected,” said Pilar Ustero, Medical Advisor for MSF’s Access Campaign.

“Now, bedaquiline is proving to be a gamechanger, giving those people with DR-TB who can access it a better chance to be cured, without the toxic side effects. We need this drug to be affordable for everyone who needs it, everywhere.”

Since the WHO recommended the use of bedaquiline a year ago as a core drug for the treatment of MDR-TB, fewer than 12,000 people were treated with a regimen including bedaquiline according to national TB programmes.

This is a paltry figure considering that an estimated 80% of the 558,000 people who develop DR-TB annually (Global TB report 2018) should be treated with this drug.

Rapid rollout of better-tolerated treatment containing bedaquiline will happen only if J&J makes it widely available in an affordable way, including by allowing other TB drug manufacturers to make generic versions.