"I have encountered many things in my humanitarian and midwifery career. I am prepared for just about anything because I have learned that I have to be.

A lot of it is not easy. Much of it stays with me. Some of it goes down on paper, like this story.

As a midwife supervisor in Gorama Mende/Wandor Project here in Sierra Leone, I am largely responsible for the mentoring of the Ministry of Health staff. This means bed-side teaching and informal training based on specific needs.

Sierra Leone has one of the highest maternal and child mortality rates globally.

The MSF objective in this project is to reduce those rates by strengthening the skilled health workforce. This often entails fielding multiple phone calls from staff from the various health units when they have questions regarding patient care.

On 2 May, I took a call from the health unit in Punduru about a patient who had given birth there four months earlier. The woman’s family had brought her in because she was having violent outbursts and was being combative. 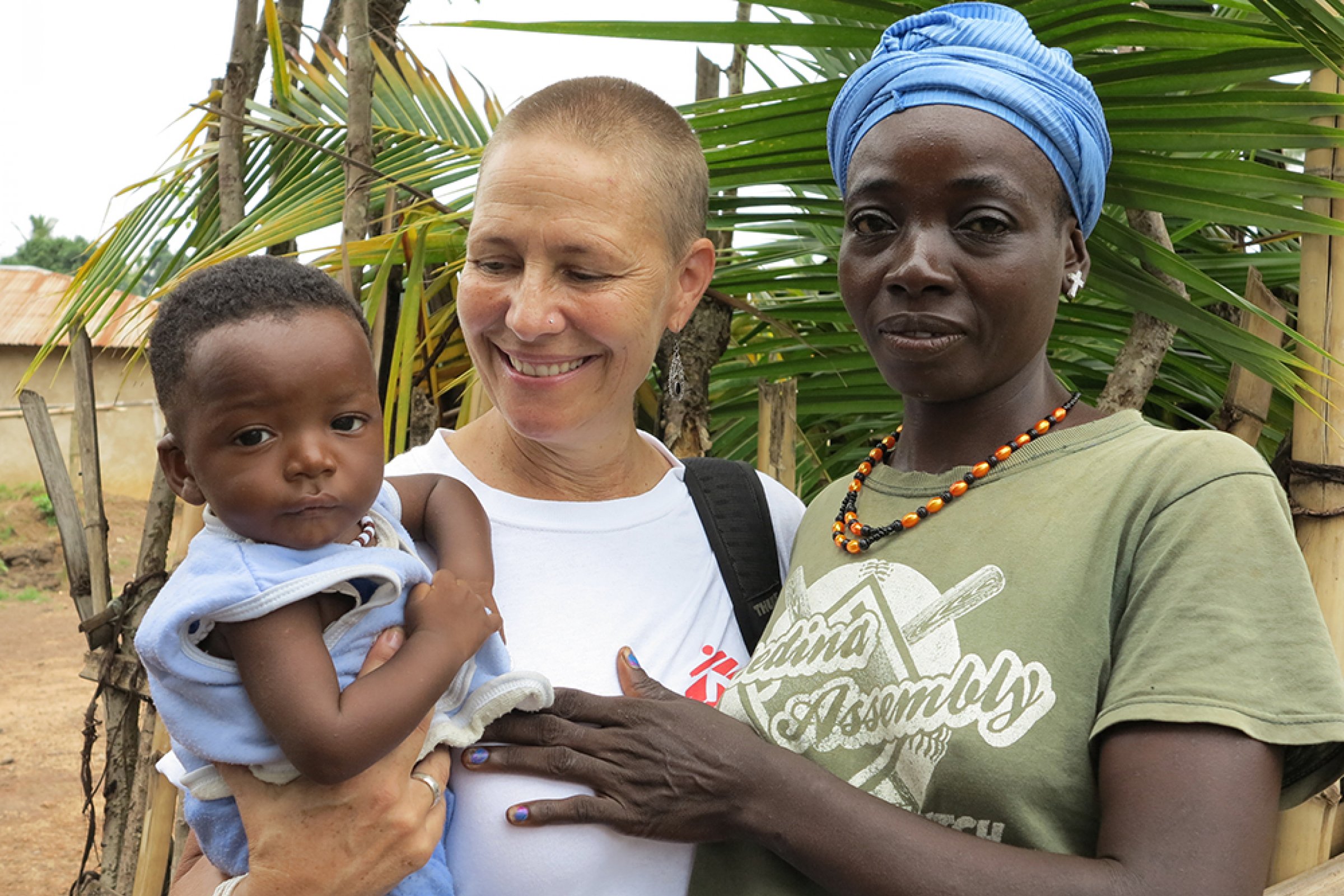 The nurse explained to me that a similar thing had happened after the birth of the patient’s last baby as well and the staff wanted her evaluated for postpartum psychosis.

Postpartum psychosis is a rare but treatable mental illness that occurs out of the blue without a history of prior mental health issues. Its symptoms include mania, delusions, confusion, agitation, sleeplessness, paranoia and hallucinations. Not all symptoms need to be present. The cause is still a mystery.

As soon as I was able to, I made the long journey to Punduru, travelling over the rough terrain with the MSF outreach nurse, Musa.

Together we arrived at the house where the woman was staying. In a corner of the backyard, a sad-looking woman sat on a wooden bench.

She looked dejected really, and, as I approached her, I saw why.

The tsunami of emotions that washed over me at the sight of this, I cannot even begin to describe.

Below her feet was a wooden board. Around her ankle was a very heavy chain that was padlocked. The chain was nailed to the board.

Her name was Mary.

The tsunami of emotions that washed over me at the sight of this, I cannot even begin to describe. I had to quickly push them aside and do what I came there to do, make an assessment of her condition and give a recommendation.

From experience with other patients with psychiatric issues, I knew that I needed to make a connection with Mary somehow if I was going to gain her trust and be able to help her.

Mental illness is a health crisis in Sierra Leone.

There is so little understanding about it and it is clearly stigmatised. There is also so much superstition surrounding it: cursed by devils, married a witch, swallowed an evil snake and so on.

People who do seek care for mental health problems generally go to traditional healers. There the evil is cast out, heads are shaved, herbal medicines are given, spells are cast.

Mary’s family did seek out this traditional treatment for her but, fortunately, they also brought her to the health unit for help.

With Musa’s help interpreting for us, Mary and I talked.

I learned she was approximately 32 years old, had given birth eight times and had lost three of her children to “fevers”. She had five living children including the four-month-old baby, Emanuel.

Mary was not experiencing any current agitation or feelings of aggression and had not had any outbursts in several days. She had no feelings of harming herself or her baby.

She said she was sleeping fairly well. She was not having any hallucinations. Her main complaint now was that she was angry because the belief was that something was “wrong with her head” and so they had shaved her hair off, against her wishes, and she felt she was ugly.

She then took off her scarf revealing a bald head.

Musa pointed out the fact that I too had a shaved head. Mary looked at me and I told her we were twins and that we both looked beautiful - then she laughed, revealing a dazzling smile.

I knew at that moment we had made a connection.

Mary’s family was all there, with the exception of her husband who was away working in another village. They had been caring for Mary’s five children since she had become ill.

The aunt would bring the baby to Mary to feed on a regular basis, but she was never left alone with him.

She was unchained at night to sleep in the house, but otherwise, because she had threatened members of the community and people were frightened of her, she remained chained in the yard all day. 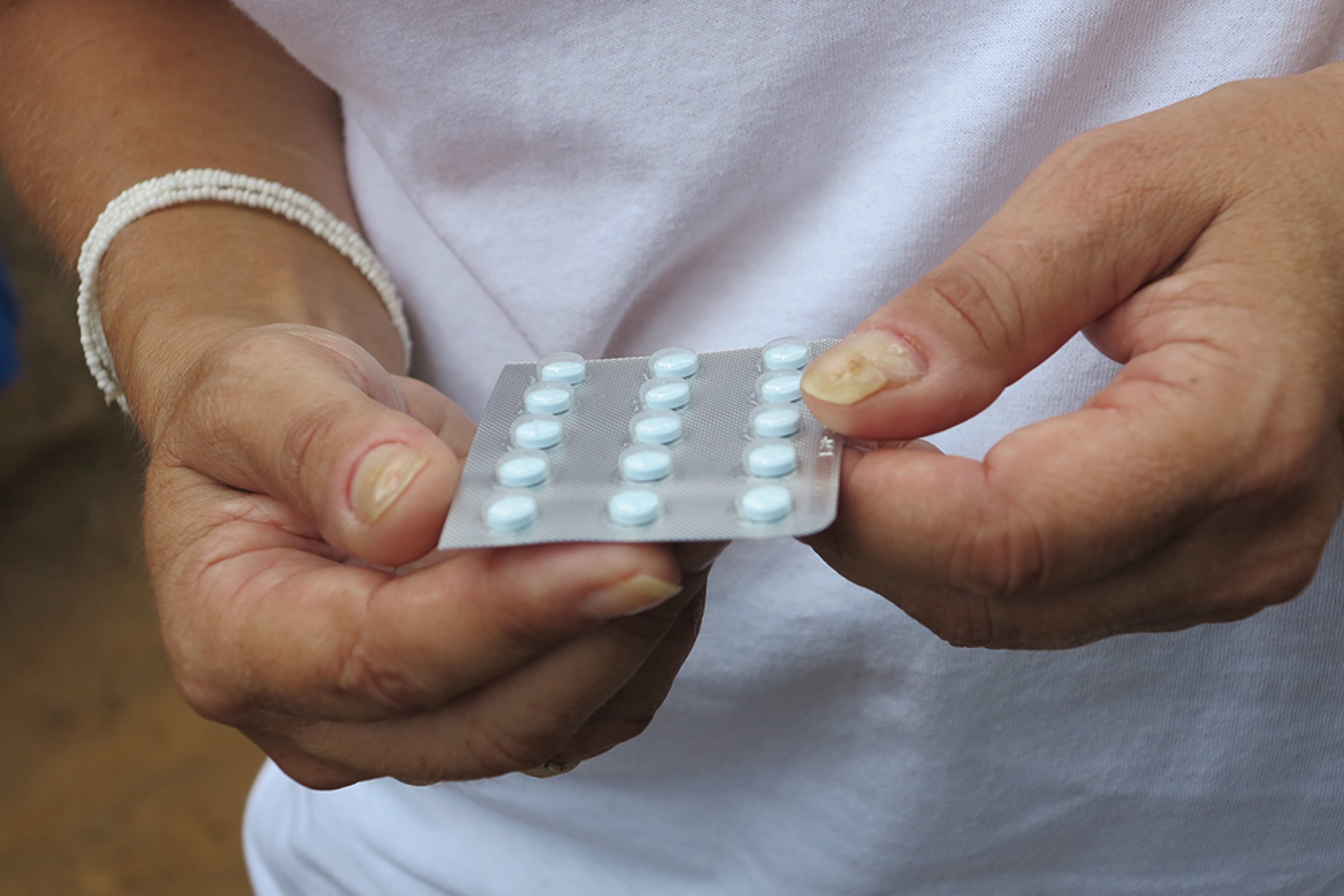 Caption
The medication offered to Mary to help her find stability

While I found the chains beyond inhumane, I remained impassive as I listened to the family and their reasoning. Because of Mary’s threats and violent outbursts, they felt that there really was no other choice for them in that moment.

It did not seem appropriate to me at the time to address the removal of the shackles with the family. Although Mary was calm when I was there, my general understanding was that she had outbursts from time to time and, because of her unpredictability, they had her in the shackles for the safety of the community.

For these reasons, I suggested family planning in the form of implants. The benefit of implants is that they last for five years but can be removed at any point should a future pregnancy be desired. Fertility is immediately restored once the implants are removed.

Everyone agreed, including Mary. It was important to me she understood and did not feel coerced in any way. For this reason, we did not place the implants that day, but we would return in a week. If Mary had changed her mind, we would look for an alternative form of contraception for her.

I also explained that I would discuss with our medical doctor and medical coordinator what medication we might be able to offer to help with Mary’s periodic episodes of aggression.

Mary said she would be willing to take medication and the family agreed they supported this decision.

Leaving Mary behind still in shackles made me more determined to help her.

Although we would never have a definitive diagnosis given that there were no mental health workers available to do an assessment, I knew we could at least treat the symptoms with medication and see if it helped.

Postpartum psychosis is a challenge anywhere in the world, even in environments where the best care and a wide variety of treatments are available.

Although Mary was currently stable, based on the description from her family, she was prone to “episodes” with periods of calm in between. This is where medication could come in helpful.

By the following week, we had ordered a medicine called Haloperidol which the doctor believed would help, even at a low dose safe for breastfeeding.

I went back the next week to place the contraceptive implants. Mary had been fairly stable, with only one slight episode of aggression towards her husband.

A beautiful smile and dancing eyes

Last week, 13 June, I took the three-hour ride on a motorbike to check on Mary.

She was back in her own home, just down the road from her parents’ house where I had first met her.

She had her baby on her back and greeted me with open arms, her huge, beautiful smile and dancing eyes which I had not seen before.

She introduced me to the rest of her children. She said she was feeling well and had had no further episodes.

It was truly a joy to see Mary back with her children in her own house and living life normally again.  We are very hopeful Mary is on her way to full recovery and we will continue to monitor her for the coming months.

Postpartum psychosis is a challenge anywhere in the world, even in environments where the best care and a wide variety of treatments are available.

However, in a low resource environment like Sierra Leone, the challenges are magnified due to the lack of knowledge about mental health issues, limited availability of medication if an issue is identified and the stigma related to mental illness.

Mary’s story may have ended differently had the clinic staff, along with Mary’s family, not reached out for help in spite of all the challenges before them."

In 2014, Sierra Leone seemed as though it was finally putting its brutal, decade-long civil war behind it. The west African country was enjoying substantial economic growth when, in May 2014, it was faced with another disaster: Ebola.

Access to medical care in Sierra Leone was already limited before the Ebola epidemic and it is estimated that around 10 percent of the country’s health workers were among the 3,950 people killed by the virus. Sierra Leone was finally declared Ebola-free on 17 March 2016 and is now struggling to rebuild its shattered health system.

Médecins Sans Frontières/Doctors Without Borders (MSF) teams work in hospitals, primary health facilities and in the community to increase access to healthcare, fill gaps in the provision of essential medicines, and help develop the country’s health workforce with a focus is on maternal and child healthcare.