Burundi: Helping patients get back on their feet for free

Burundi: Helping patients get back on their feet for free 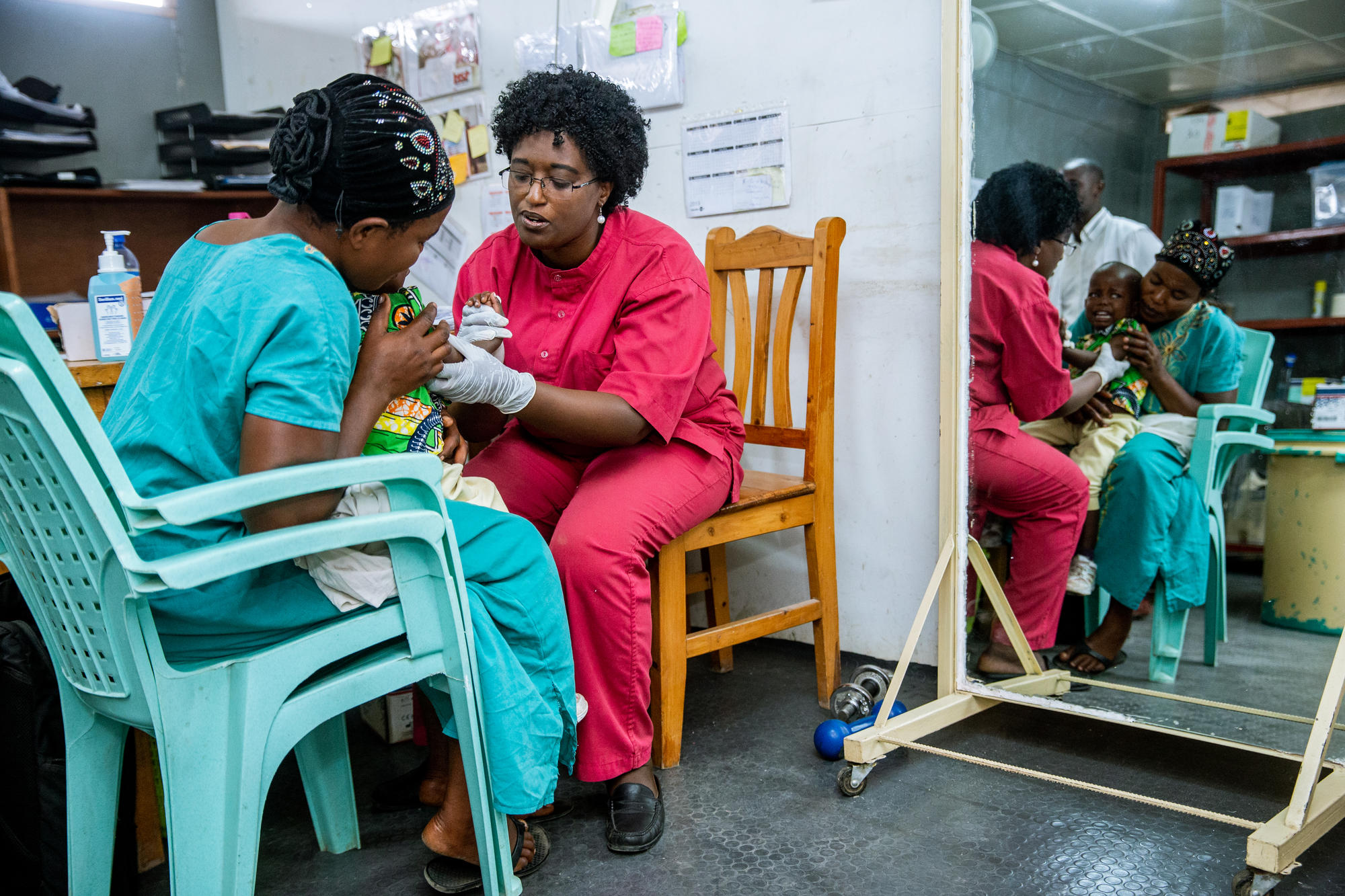 A 20-year-old carpenter from the Bwiza neighbourhood arrives with a cut to his forehead caused by a sharp rock.

“This patient was hit by a stone thrown up by a fast-moving car,” says Alain.

“We’ve given him first aid, but he needs internal and external stitches. Given the extent of the injury, we will transfer him to L'Arche de Kigobe.”

L'Arche de Kigobe is a medical centre set up by MSF to treat people injured during the crisis that shook Burundi in 2015 when political unrest caused mass violence and a humanitarian emergency.

After that, patient numbers jumped from 200 per month to nearly 2,000.

Now, the centre mainly provides care for victims of road accidents, as well as people with burns and survivors of sexual violence.

“I was very lucky to be brought here. I’m only a fisherman, where could I have found the money to pay for all this?”

“Our patients come from all over the country,” says MSF project coordinator Vincent Onclinx. 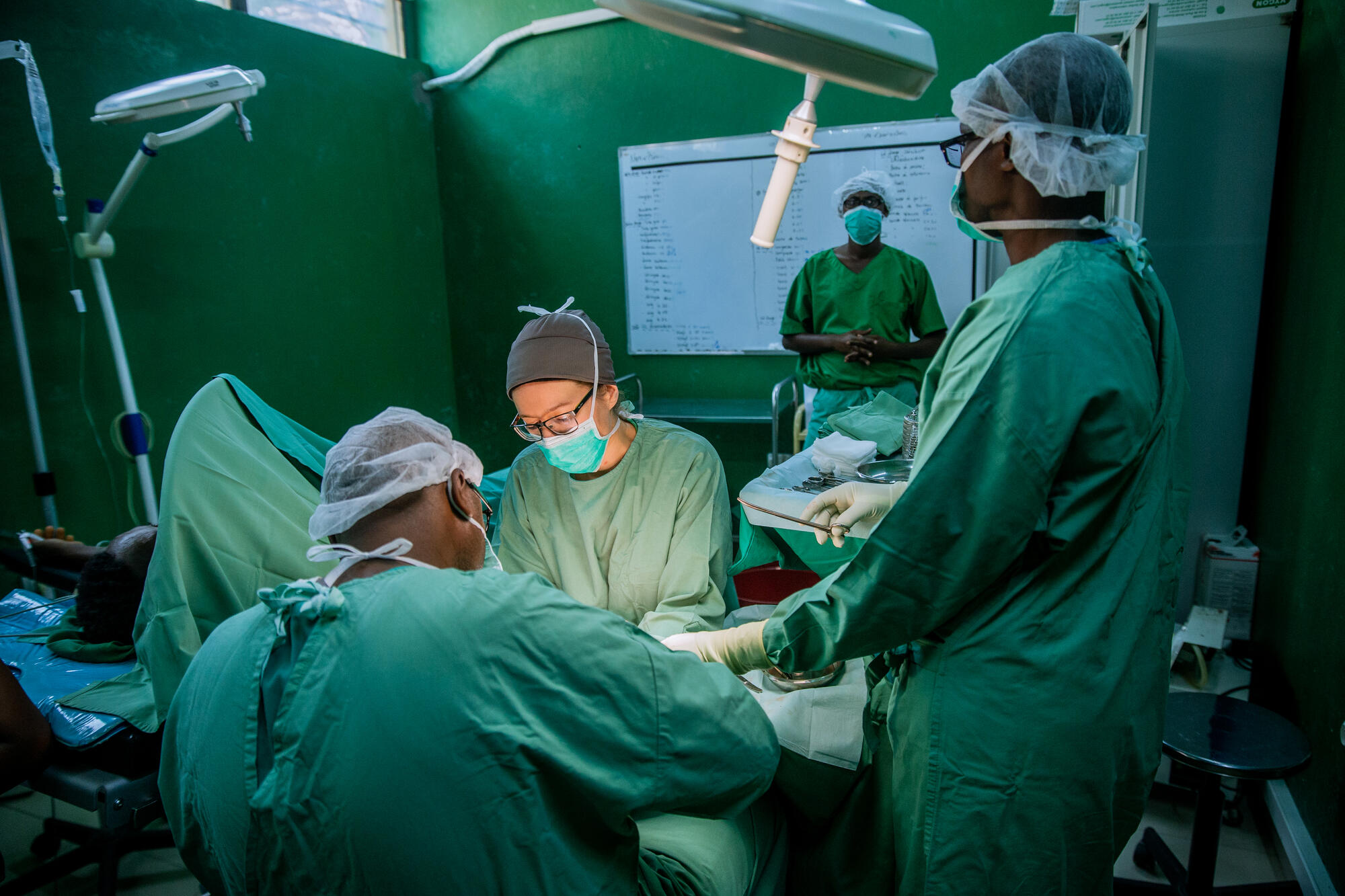 Caption
A surgical intervention is underway at “L’Arche de Kigobe” trauma center in Bujumbura, Burundi. MSF surgeons perform a tendon repair on the arm of a young boy after a road crash.
© Evrard Ngendakumana

With more and more patients needing care, in June 2019 MSF decided to focus on those with complicated trauma injuries, referring patients with simple trauma injuries to two nearby partner hospitals, Kamenge and Bwiza-Jabe, as well as two health centres, Buterere II and Ngagara.

MSF covers the cost of the patients’ care while providing healthcare staff with training and other support.

Many of the people who live and work here are carpenters – a profession where work-related injuries are common. 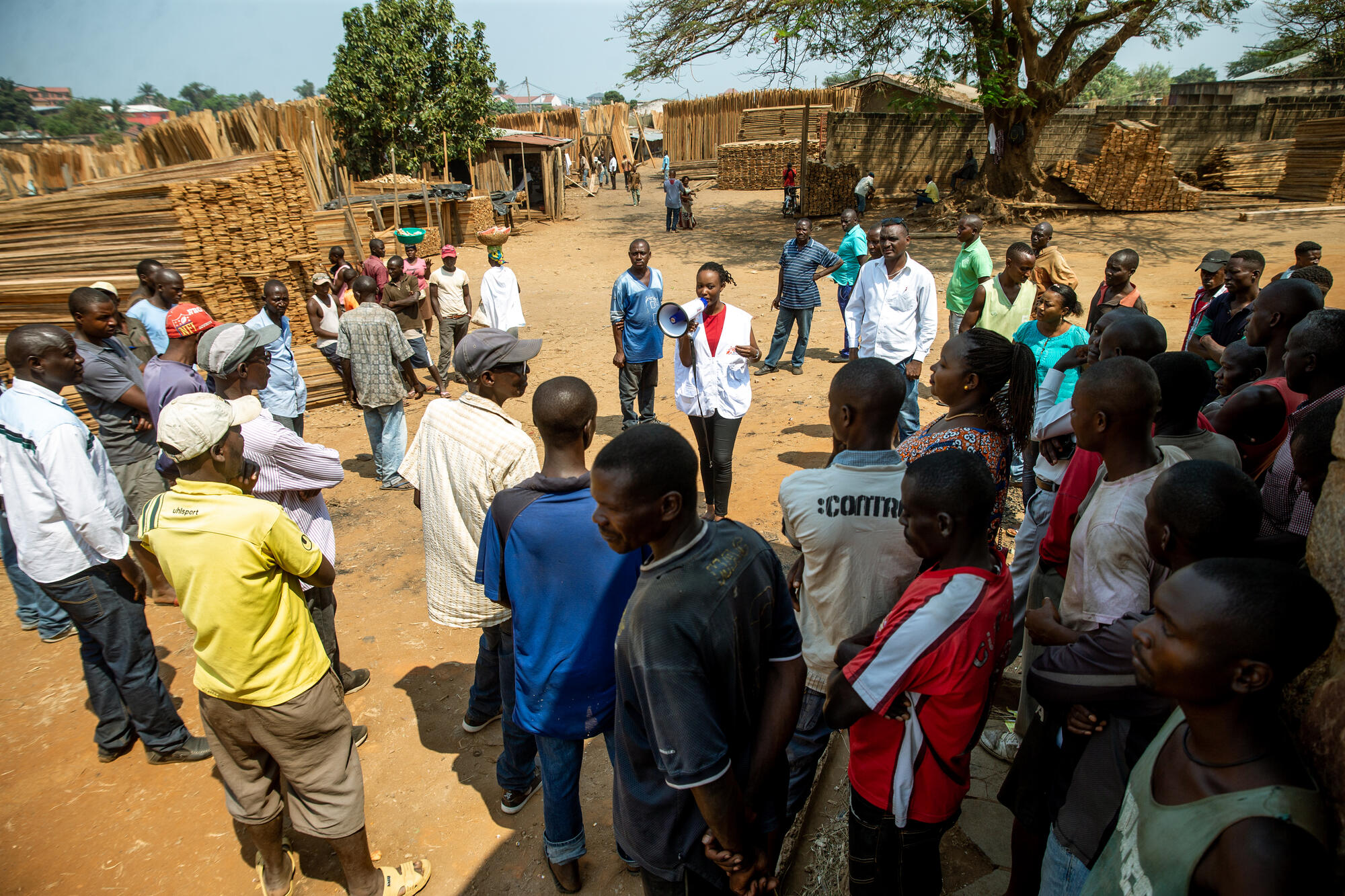 Caption
Nicole Niyoyankunze, an MSF health promotion worker, raises awareness among carpenters in the Bwiza district about the MSF policy of decentralization of care for simple trauma cases. The expansion of admission criteria for accidental trauma led to an increase in attendance at “L'Arche de Kigobe” MSF facility. The project therefore decided to decentralize simple trauma cases to two health centers and to two district hospitals.
© Evrard Ngendakumana

In response, Nicole is running a group information session, telling people what to do if they get injured and where to receive treatment free of charge.

“In the healthcare facilities we run and support, patients do not have to pay the costs of their treatment,” says Nicole.

“This is an important message because financial costs can constitute a significant barrier to medical care.” 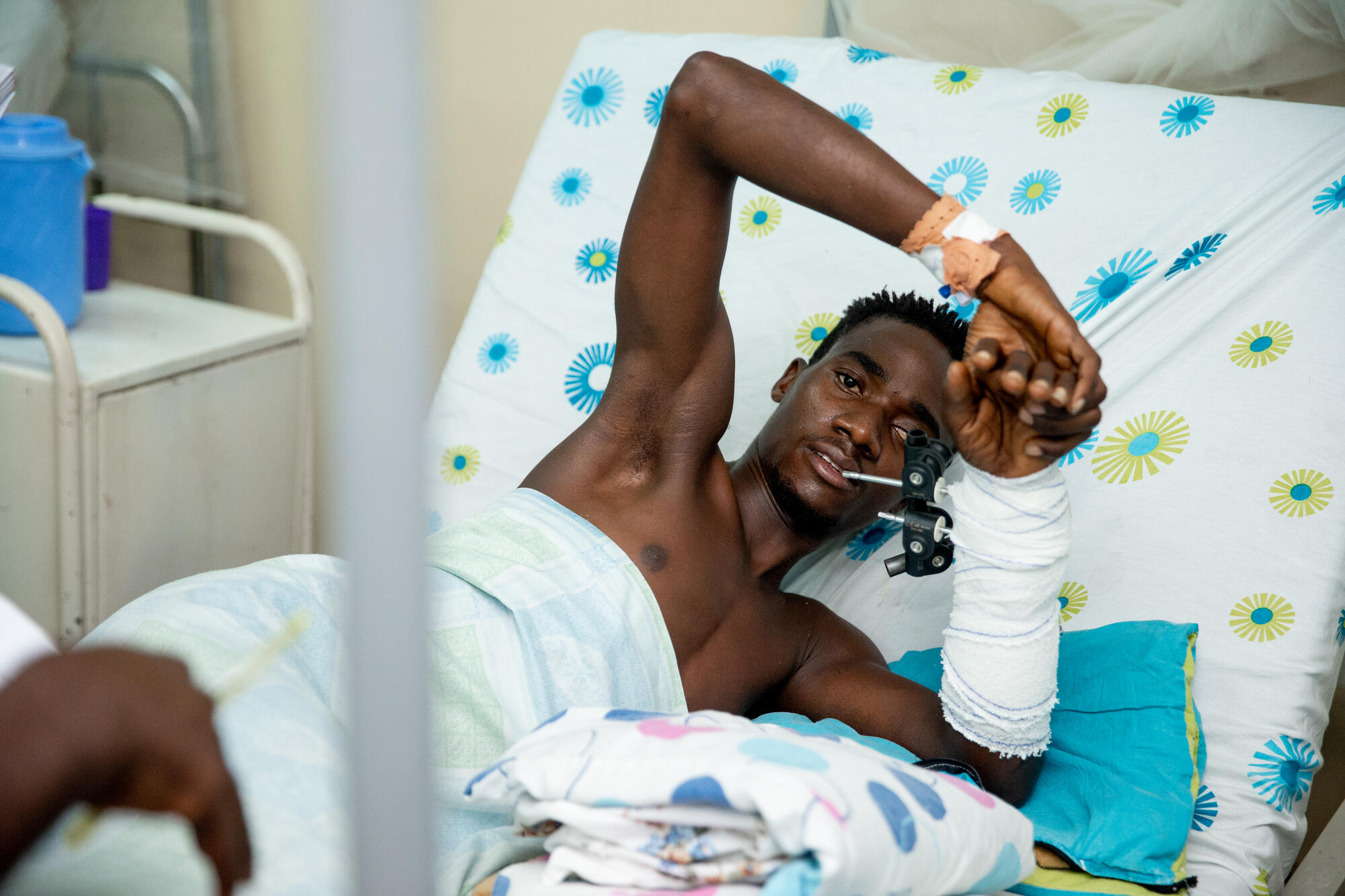 Caption
Two weeks ago, Abdoul Karim was hit by a car as he was crossing the street to sell fish and arrived unconscious in “L’Arche de Kigobe” trauma center. His arm was operated and he’s slowly recovering from the shock. “I am a fisherman and I couldn’t have afforded to be treated in another hospital. I am glad I woke up here. The staff treats me well and for free”.
© Evrard Ngendakumana

Fisherman Abdoul Karim was hit by a car as he crossed the street. Brought to L’Arche de Kigobe, doctors operated on his arm. Two weeks later, he is now recovering in one of the wards.

"When I woke up at L'Arche that day, I didn’t know where I was or how I got there,” says Abdoul Karim.

“Then, I started to have glimpses of what happened: I remembered this car as I was crossing the street to sell my fish.”

Abdoul Karim’s memories of his accident may be sketchy, but he knows for sure that, without free treatment, he could never have afforded the surgery to fix his broken arm.

“I was very lucky to be brought here,” he says.

“The doctors operated on me and took care of me just as if I was going to give them money. I’m only a fisherman – where could I have found the money to pay for all this?”

As well as carrying out emergency and orthopaedic surgery, MSF teams here provide physiotherapy and psychosocial support to help patients deal with their injuries both physically and mentally. This is with the aim that, once they leave hospital, they will have the skills they need to get on with their lives. 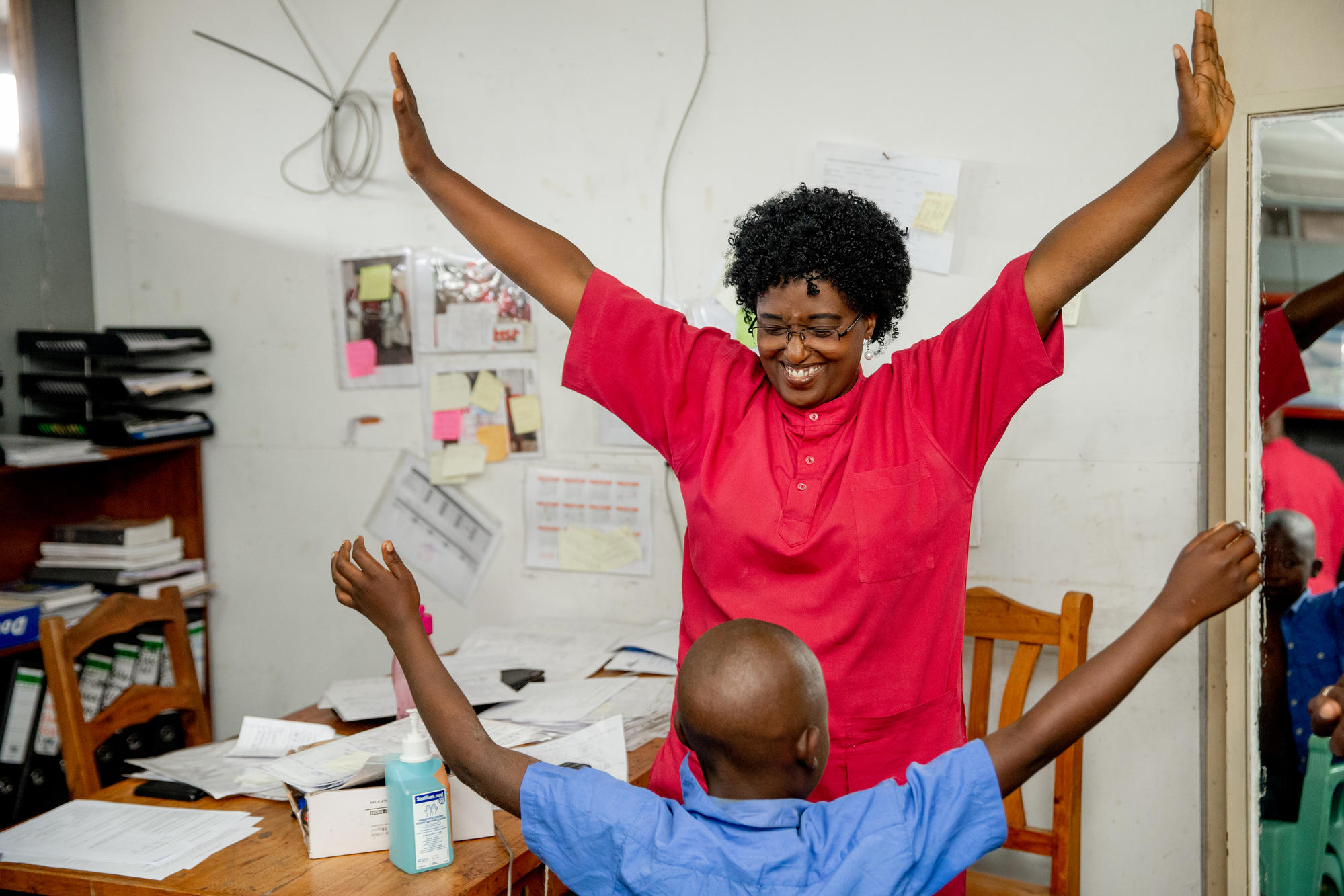 Médecins Sans Frontières/Doctors Without Borders (MSF) has been working in Burundi since 1992. Our work in the country has focused on providing  responses to endemic and epidemic diseases, social violence and healthcare exclusion.

Since independence from Belgium in 1962, Burundi’s 10.5 million people have been plagued by civil war. Tensions still exist between the usually-dominant Tutsi minority and the Hutu majority.

Due to current unrest in the country, thousands of Burundians have fled across the border to Tanzania. We are helping tens of thousands of these refugees in the Nyarugusu and Nduta camps.