Snakebite: “Antivenoms, not frogs, are needed for a cure”

Snakebite: “Antivenoms, not frogs, are needed for a cure” 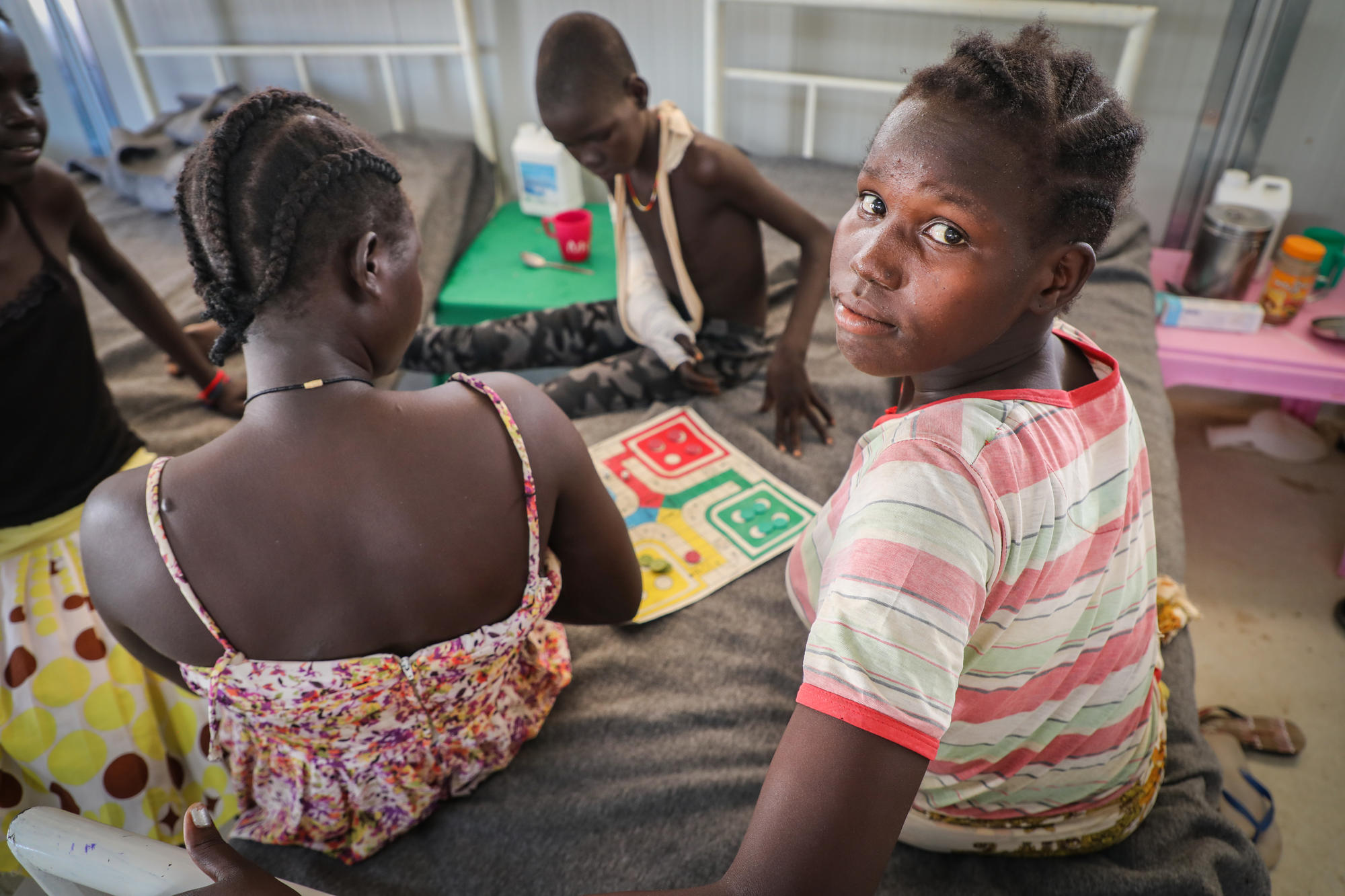 Caption
Patients play a board game in the post-operation ward at Agok hospital, where MSF treats snakebite victims.
© MSF

For the 19th time, 10-year-old Awien is being taken into the operating theatre. Her right arm, damaged beyond repair, hangs limply in a sling around her neck.

But at least she still has it. And, most importantly, she is still alive.

Two months ago, Awien was bitten by a snake as she slept at night.

Like many other snakebite victims across sub-Saharan Africa, reaching medical treatment in time was not a given for Awien.

In rural areas like this, people’s first reaction to a snakebite is usually to treat it with traditional remedies.

Awien’s family tried a number of things: a frog was cut in two and put on the bite to remove the venom; she was given raw egg to drink and then a mixture of seeds and leaves to make her vomit so as to get the venom out of her body.

None of these remedies helped, so her uncle decided to carry her on his back to the nearest hospital.

It took him a whole night to walk to Agok, where MSF runs the only hospital in the region. 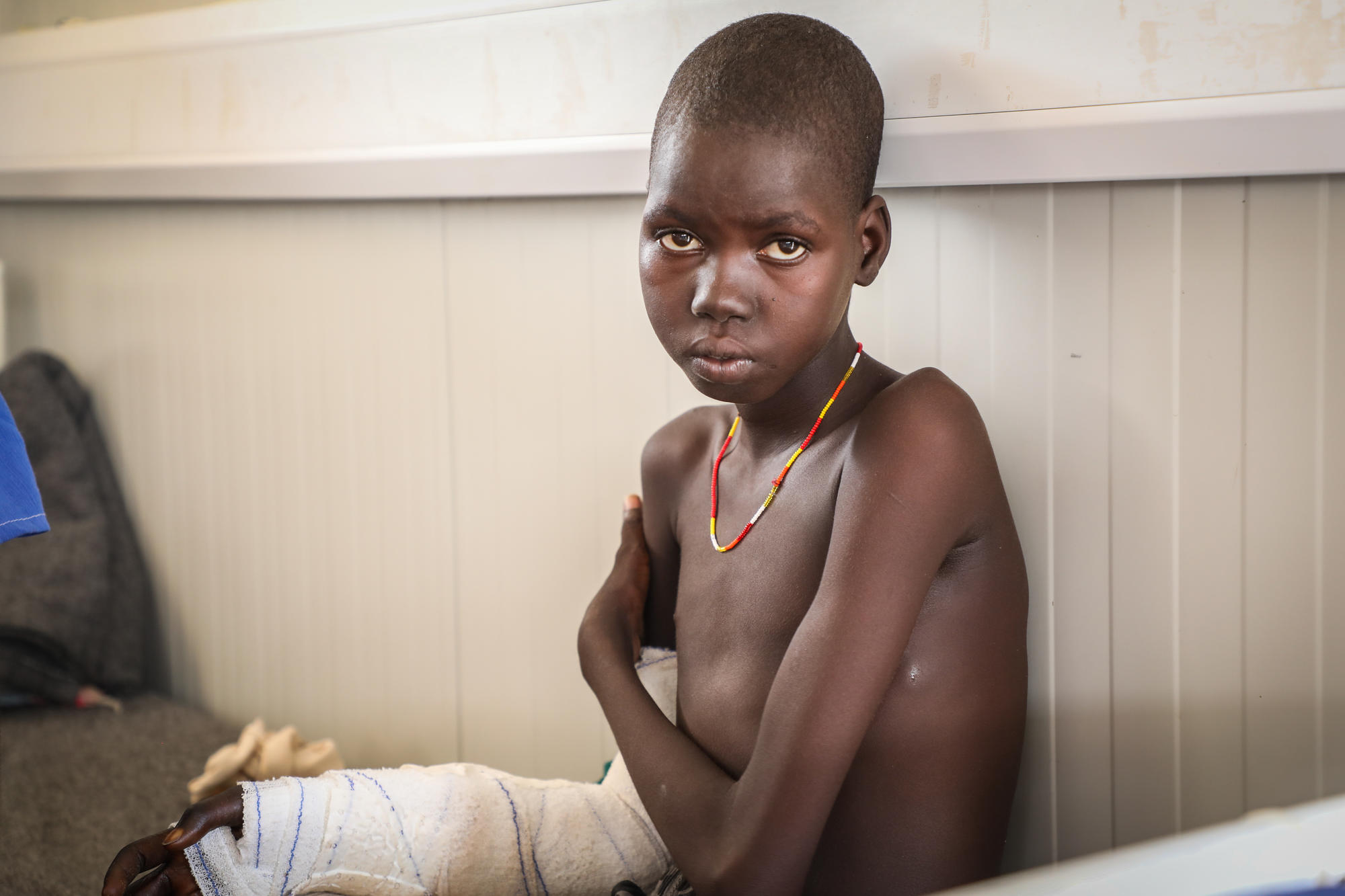 Caption
Ten-year-old Awien was bitten on her arm by a snake while she was sleeping. Her family tried traditional remedies before reaching an MSF hospital.
© MSF

Days away from hospital

In Agok, MSF treats around 300 snakebite victims each year, most of them during the rainy season when snakebites are most frequent.

To escape the water, snakes often enter people’s houses, which is where about half of victims are bitten. Children playing outside and people working in the fields are also at risk.

But, wherever they are bitten, everyone has the same problem: how to get treatment.

Most snakebite victims live in remote areas and have to travel long distances to seek care. During the rainy season, when roads can become impassable, people may have to travel for several days to reach a hospital.

In the village of Rumdong, a few hours by foot from Agok, the local leader, James Kuol War, tells how a man died this year after being bitten by a snake because he did not reach hospital in time.

Two other people in the same village, including a 13-year old girl, have been treated for snakebite at MSF’s hospital in the past year.

It is a longstanding problem.

Another villager – a man in his seventies – says that he was lucky to survive two different snakebites in the same leg over the years. His foot is now badly misshapen, but he is otherwise healthy and can still fish and farm.

Globally, about five million people are bitten by snakes every year. Of these, about 100,000 people die as a result of a snakebite – 30,000 of them in Africa.

“Some people come [to hospital] too late and some don’t come at all, so we don’t actually know the full extent of the snakebite burden in the area.

“But, we do know it is a big problem and that people lose their lives because they can’t get treatment.”

Priced out of an antidote

In most cases, snakebite envenoming – the medical condition resulting from a snakebite – needs to be treated with antivenom.

However, antivenom is expensive and not available in many health facilities.

Some people come [to hospital] too late and some don’t come at all, so we don’t actually know the full extent of the snakebite burden in the area.

It can cost several hundred US$ per patient, which is more than a year’s salary for many people. Especially those in rural areas, where most snakebite victims live.

Snakebite is a poor person’s disease, but pharmaceutical companies don’t create medicines for the poor. They create products that will be lucrative.

Previously, MSF used an antivenom called FAV-Afrique, an all-in-one antivenom that was used to treat envenoming from ten different snake species in sub-Saharan Africa. But, the manufacturer decided to stop producing it and the last batch expired in June 2016.

As there was no equivalent available, MSF had to find suitable alternative treatments.  Two years down the line, MSF medical teams are now successfully using two new antivenoms in South Sudan: EchitabPlus and SAIMR-Polyvalent.

Jacob says: “Before, it was more straightforward: we could give the same antivenom even if we didn’t know which snake the patient had been bitten by.

“Now, the treatment has become more complex and we administer antivenom depending on the patient’s symptoms. But overall, it works, and we are glad to have found an alternative.”

Whilst this is good news for MSF patients in Agok, this is not the solution for all snakebite victims as choosing from two antivenoms, based on symptoms, is difficult for non-specialists. 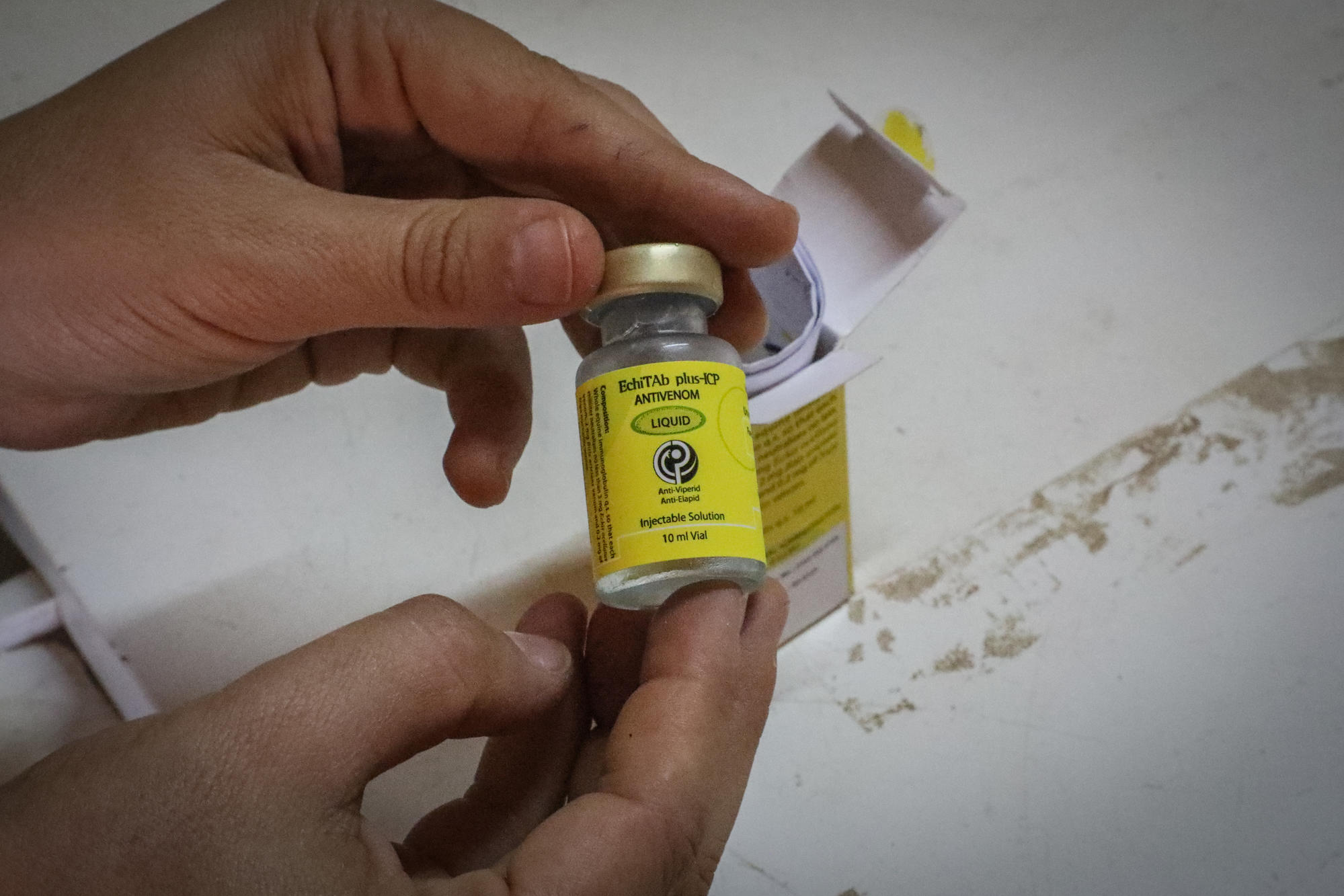 Caption
EchiTAb plus-ICP antivenom is used to treat two common types of snakebite envenoming. However, it is more likely to have side-effects than Fav-Afrique.
© MSF

Antivenoms that are effective against venomous snakes in any given area need to be made available in all health facilities, but the high price of these antivenoms is a problem.

It is a vicious circle, where countries don’t buy antivenoms for their hospitals because they are too expensive. At the same time, pharmaceutical companies don’t make antivenoms because so few buyers are purchasing them.

The result is that they remain largely out of reach of the people who need them.

Even with antivenom, treatment for snakebite is much more difficult when victims arrive at hospital late into their condition.

Delays can cause further damage, including “compartment syndrome”. This is when swelling caused by the venom increases pressure within a muscle compartment, to the point that blood cannot supply the muscles and nerves with oxygen and nutrients. If left untreated, the patient’s affected muscles and nerves fail and may eventually die.

Once acute compartment syndrome has occurred, surgery is the only option. In the most severe cases, the damage may be so extensive that patients lose the use of their limbs or need amputations.

As a result, an estimated 400,000 people globally are maimed or disabled every year because of snakebite.

The long road to recovery

Awien has been at the hospital for two months now.

When she first arrived, she was on a critical condition and was treated with three doses of antivenom. Then, after being unconscious for her first five days in hospital, Awien woke up and her condition started to improve. 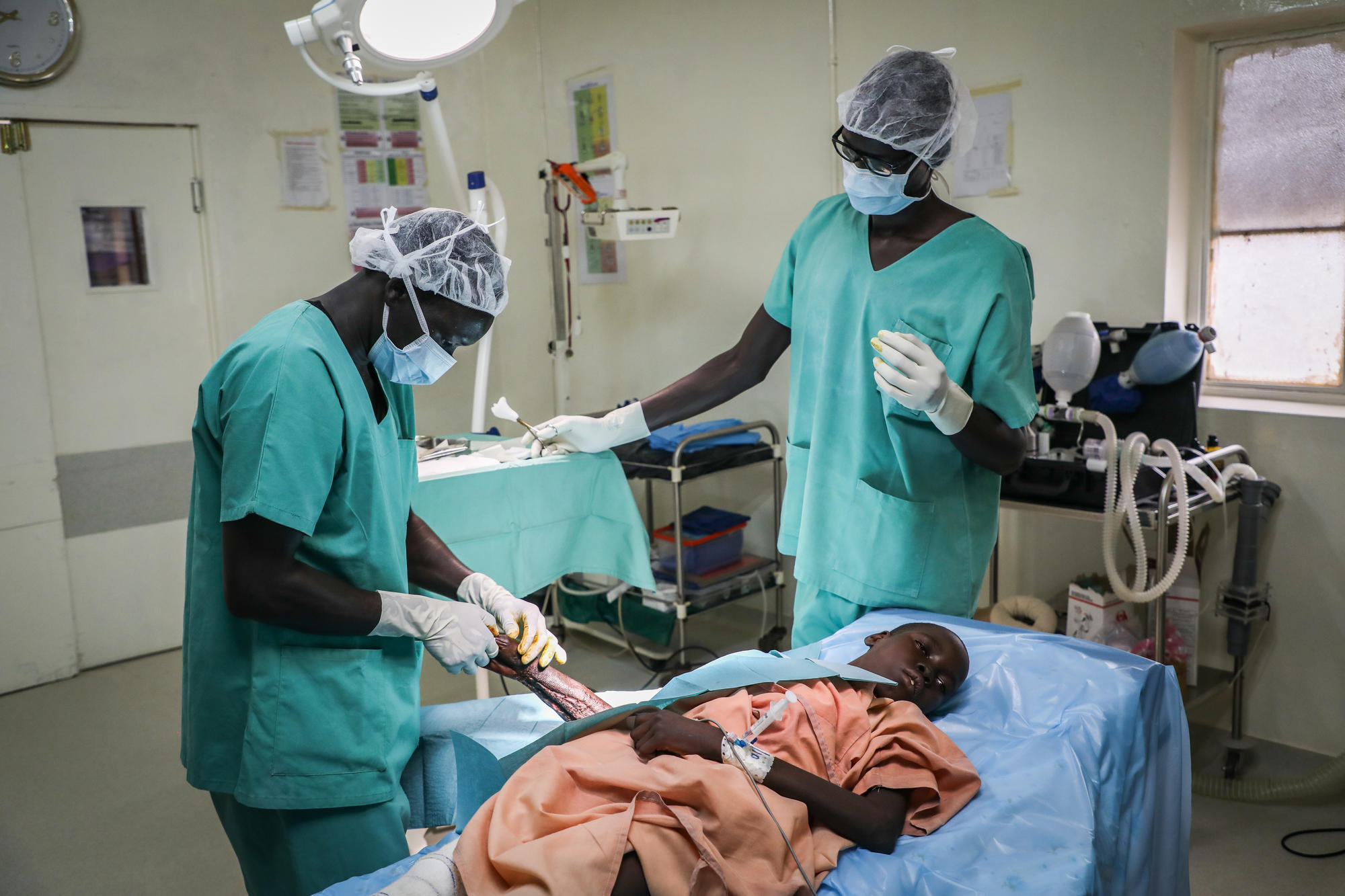 Caption
An MSF physiotherapist examines Awien's arm. The treatment must be performed under anaesthesia due to the severity of the pain.
© MSF

She has now had multiple surgeries to remove dead tissue, as the muscles in her arm were damaged beyond repair as a result of compartment syndrome.

And, although her nineteen surgical procedures sound like a lot, her family did not want her arm amputated and asked the medical team to do all they could to save it.

Awien was lucky to get treatment. This is not the case for countless others.

Our work in South Sudan >