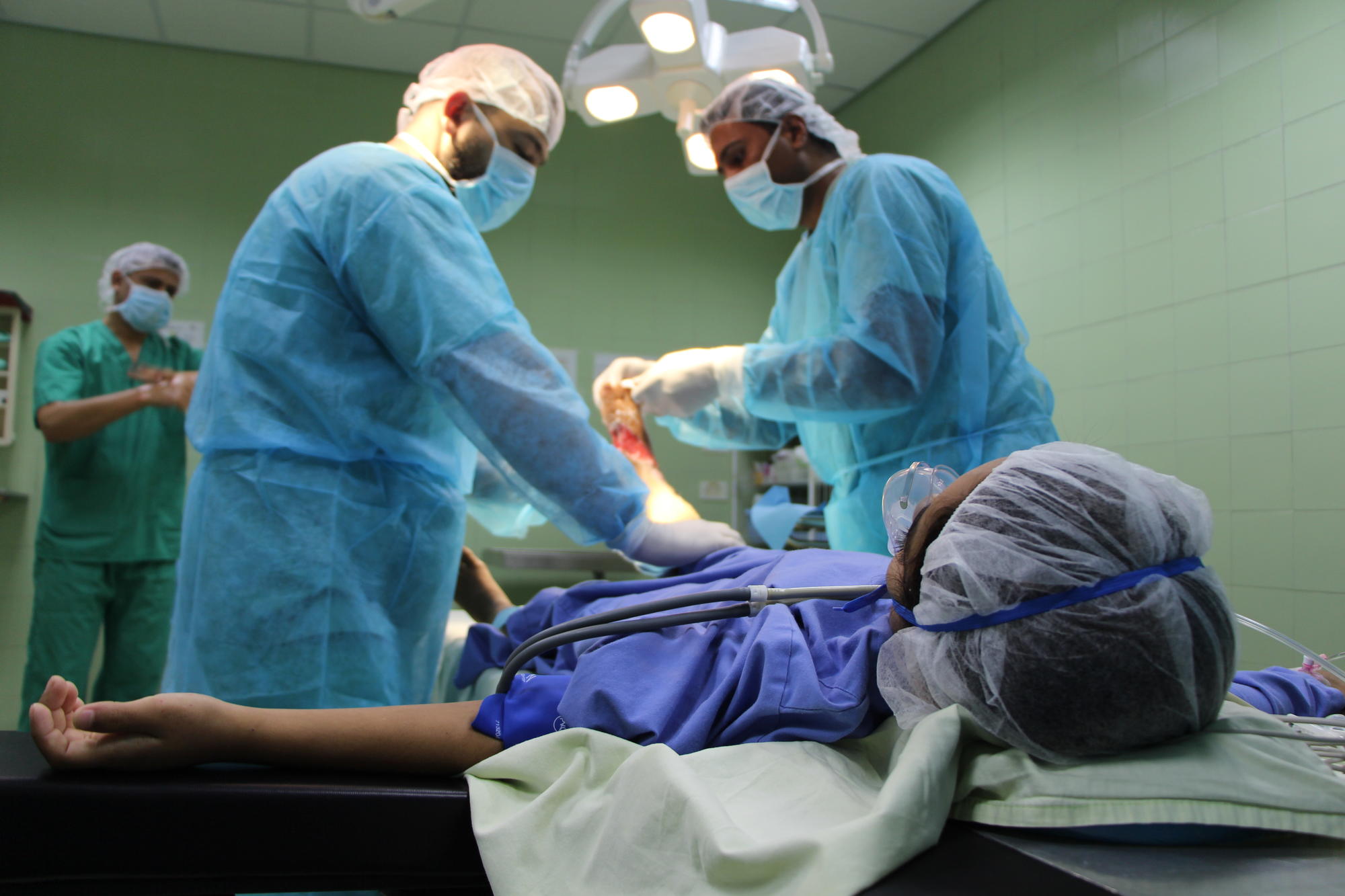 Caption
MSF medics tend to Salwa, 11, who survived an Israeli airstrike that killed her family in the Gaza strip in November 2019.
© Candida Lobes/MSF

On 12 November 2019, as dawn broke over the Gaza Strip, the Israeli army launched airstrikes against a Palestinian Islamic Jihad group in an operation dubbed "Black Belt".

The attack prompted a military escalation in the region, with rocket barrages fired from the Strip towards central and southern Israel and the Israeli army retaliating by bombing military targets in Gaza.

Civilians, including children, were caught up in the violence. Among them was a young survivor named Salwa.

Salwa is slowly waking up from sedation. She feels groggy, but she’s already familiar with this sensation.

She has undergone several surgical procedures since she arrived at the MSF-supported Dar Al Salam Hospital in southern Gaza.

She was brave this time and didn’t cry when she entered the operating theatre.

From her room in the hospital, Salwa can see the Mediterranean in the distance and hear the voices of pupils coming from the school close by.

But her big brown eyes always look elsewhere. She stares at objects and people in the room as if outside there was something wrong, something to worry about. 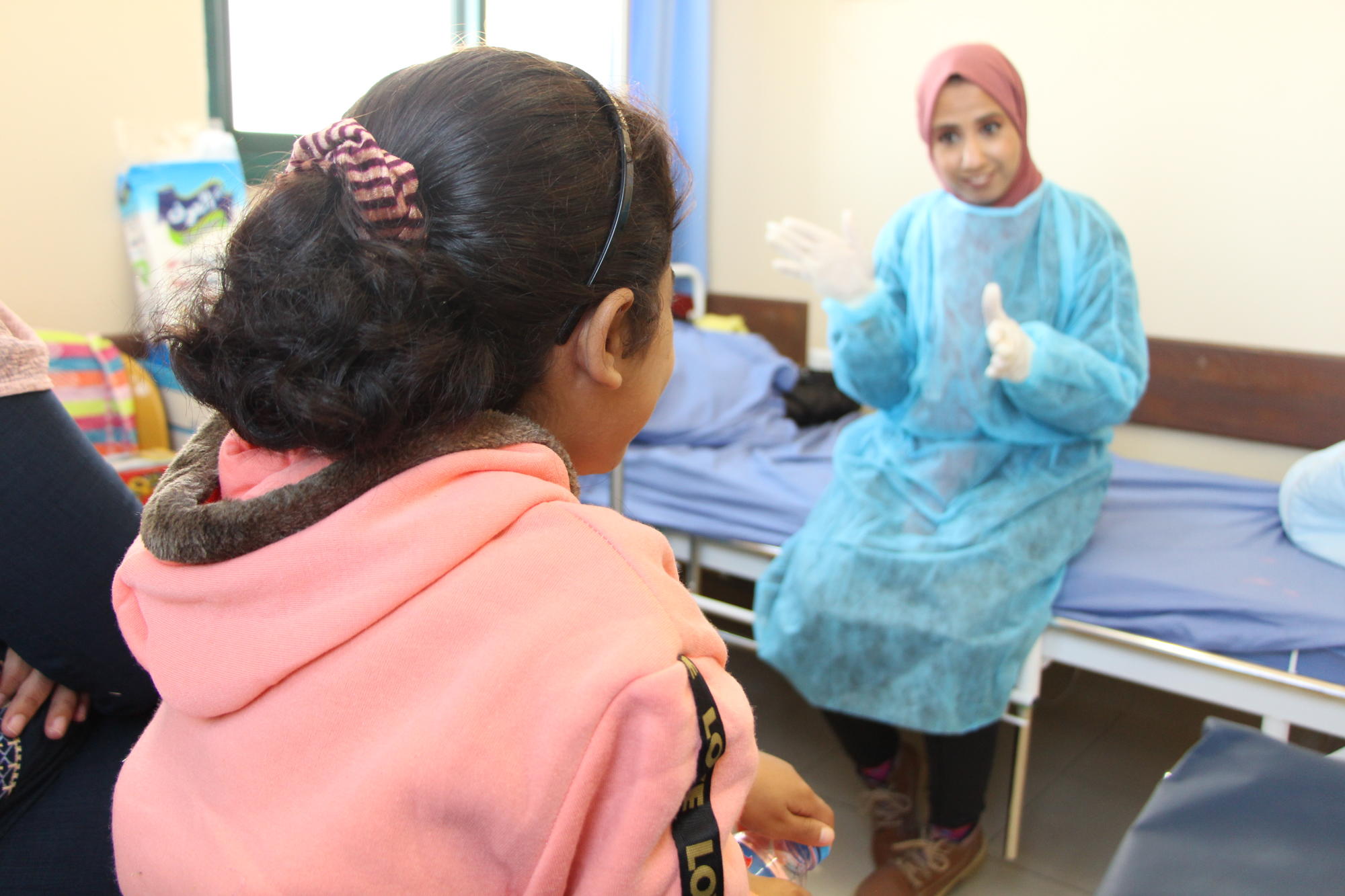 “Some days are better than others for her,” explains Rania Samour, an MSF counsellor providing psychosocial support in the hospital.

“Some days Salwa just bursts into tears and keeps asking to see her family. Other days, she’s more responsive; she smiles and chats with me.”

Caught up in the violence

Eleven-year-old Salwa survived an Israeli airstrike that killed her family during the military escalation between the Israeli army and the Islamic Jihad group in the Gaza strip in November 2019.

In three days, the Israeli airstrikes killed 11 civilians in Gaza, eight of them children.

Israeli authorities admitted that a faulty assessment led to the attack that killed nine members of Salwa’s family: her parents, her brothers, her aunt, her uncle and her cousins.

The families used to live in shacks built with corrugated metal sheets, some 15 kilometres south of Gaza City, where they raised livestock.

Nothing remains of their homes.

“My mom is a teacher of English,” Salwa explains with the few words of English she knows. “When I’m older, I want to be a teacher like her, but I want to teach Arabic.”

Her grandmother will take care of her education now. She’s an older woman with six grandchildren who miraculously survived the airstrike. She has very few means to sustain them.

When Salwa was admitted to the hospital four weeks ago, Rania was there. She hasn’t left her side since.

Living in Gaza is like living a perpetual trauma. Our lives are continuously at stake and we have to get used to it.

“She’s just a child and now she has to accept that her home was destroyed and her parents are dead,” Rania says.

“She has flashbacks of the night when her family was killed and her life was wrecked. She remembers her older sister dragging her out of the debris in thick smoke.

“She couldn’t walk because of a wound in her foot; she was in pain. Her father was alive, next to the dead body of her mother. She remembers that he was injured while imploring rescuers to take care of his children.”

This is Salwa’s last memory of her father. That night, he was transferred to the intensive care unit of Al Shifa Hospital in Gaza.

A few days later, he died from the injuries he suffered in the airstrike.

“I had to tell her the truth; I had to protect her from another trauma,” Rania explains, her face grave.

“When I told Salwa that her father was dead, I was hugging her. I could feel her palpitations. I wish I could bring her family back; it’s the only thing she wants.”

A long road to recovery

Salwa was referred to MSF’s hospital in southern Gaza with open fractures of the right foot and soft tissue injury.

“Due to the severity of her wound, we needed aggressive debridement (the surgical removal of dead, damaged or infected tissue) to treat Salwa, flap coverage of the bone and subsequent skin grafting to restore the soft tissues of her foot,” explains Helene Andersson-Molina, an MSF surgeon in Gaza. 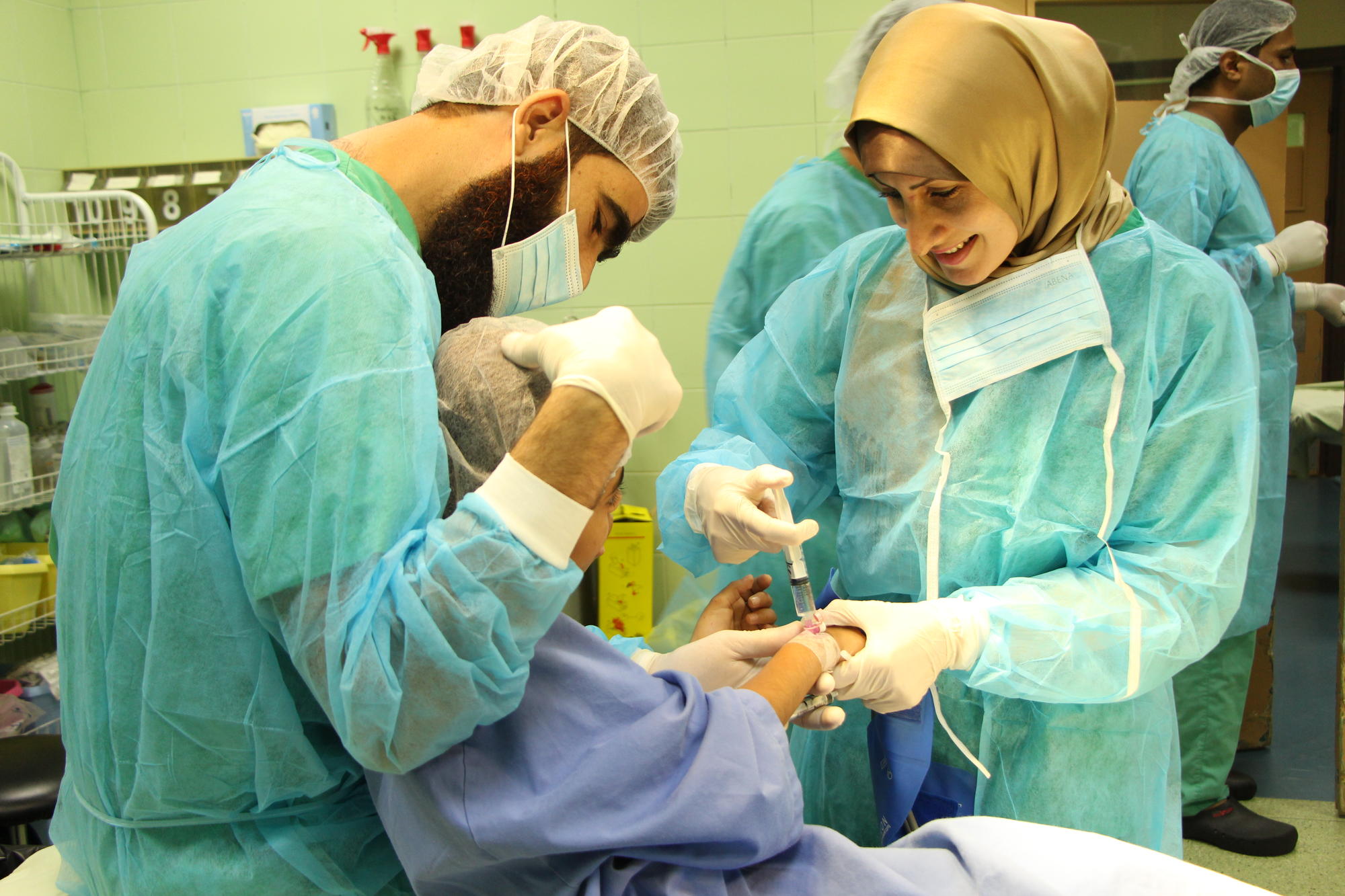 “The fractures are still healing and are being treated conservatively. Bone and tissue sampling also showed that Salwa has multi-drug resistant bacteria. Wounds like this, caused by violent trauma, are very prone to infections, as the skin is ripped apart and the flesh is open, allowing bacteria to get in.

“But the presence of multi-drug resistant bacteria implies that we need very specific antibiotics. For Salwa, it means a longer treatment in an isolation room with contact isolation precautions.”

Life in Gaza "a perpetual trauma"

Helene says although Salwa has a long process ahead, she will recover the functionality of her foot. Nonetheless, Rania is worried about the girl’s future.

“She might walk again, but the scar will follow her for the rest of her life, just like the psychological trauma of this tremendous loss. Who’s going to take care of her health, of her education?” Rania wonders.

“It’s been a difficult week for my heart. I see Salwa in her bed and I can’t stop imagining myself as a child or my own children in this situation.

“Living in Gaza is like living a perpetual trauma. Our lives are continuously at stake and we have to get used to it.”

In the last 10 years, almost 2,000 civilians have perished during the Israeli army military operations in Gaza, according to the United Nations Office for the Coordination of Humanitarian Affairs.

In the same period, 18 Israeli civilians have been killed by rockets or mortar fire from Gaza, according to B’Tselem – The Israeli Information Center for Human Rights in the Occupied Territories. 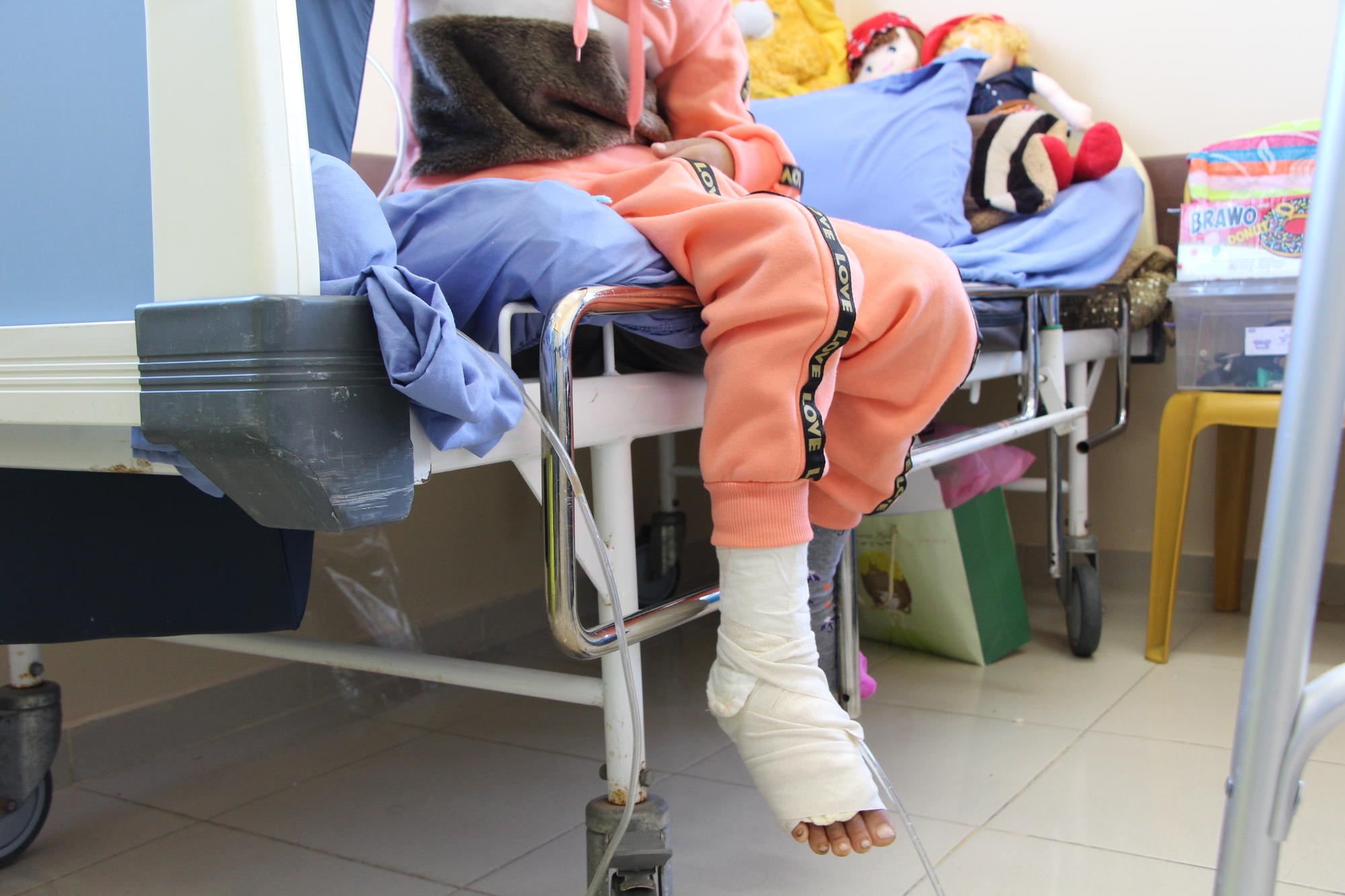 Salwa’s story, her injuries and her loss embody the pain inflicted on the thousands of people caged in this endless conflict.

After every military escalation, when a truce eventually prevails and bombs cease to fall, the remnants of the violence linger.

They linger among the families mourning their dead, among houses and lives in ruin, and among the people, who, despite everything, continue their work to alleviate this burden.