Malaria: The other epidemic in Sierra Leone

Malaria: The other epidemic in Sierra Leone 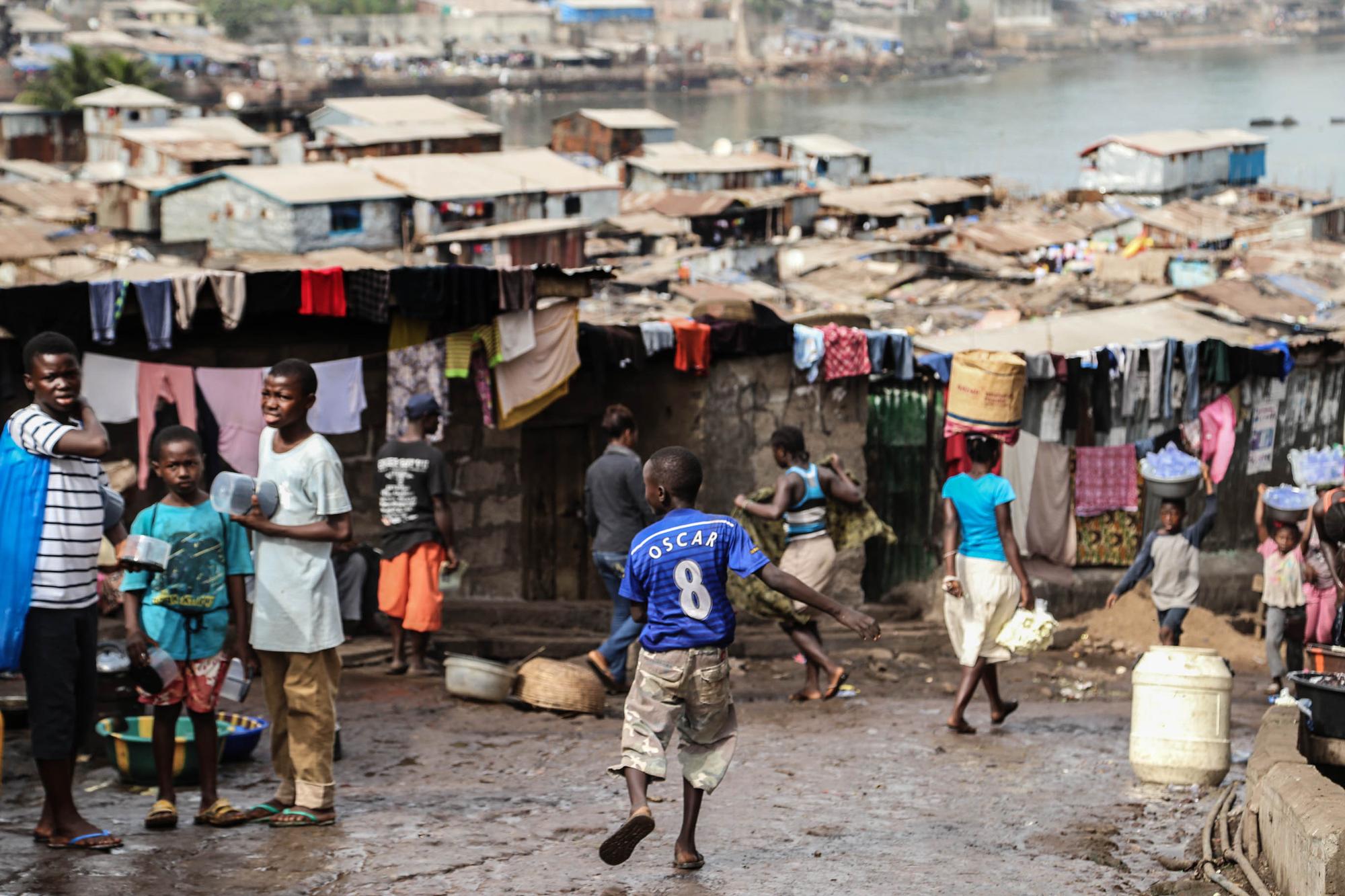 Caption
In the slum of Mabella
© Agus Morales/MSF

In the country where Isatu Koroma and Angela Taylor live, there are quarantined houses surrounded by tape, and checkpoints where volunteers wield thermometers.

Schools are closed and there are signs on the street asking people not to touch each other. The disease which Isatu and Angela are most anxious about causes fever and can be lethal. Which one is it?

In 2013 there were more than 1.7 million cases of malaria in Sierra Leone, a small country in West Africa with a population of six million.

According to the World Health Organization (WHO), 4,326 people died of the disease that year.

“This girl had malaria. And this woman. And this guy,” says Ibrahim Sesay, who lives in a ramshackle building in Freetown together with other families. Isatu Koroma turns her head and gets up.

“I had malaria several times, continuously,” she says. “I was very affected. I used to go often to the hospital.”

There are 24 people crammed into this building, and here the everyday nightmare is not Ebola but malaria. 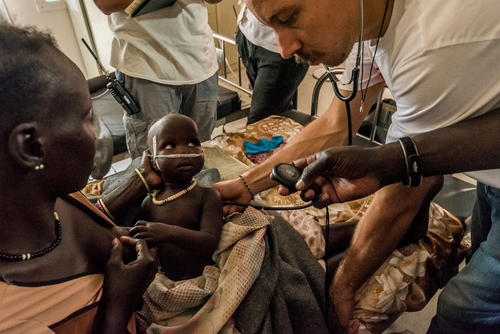 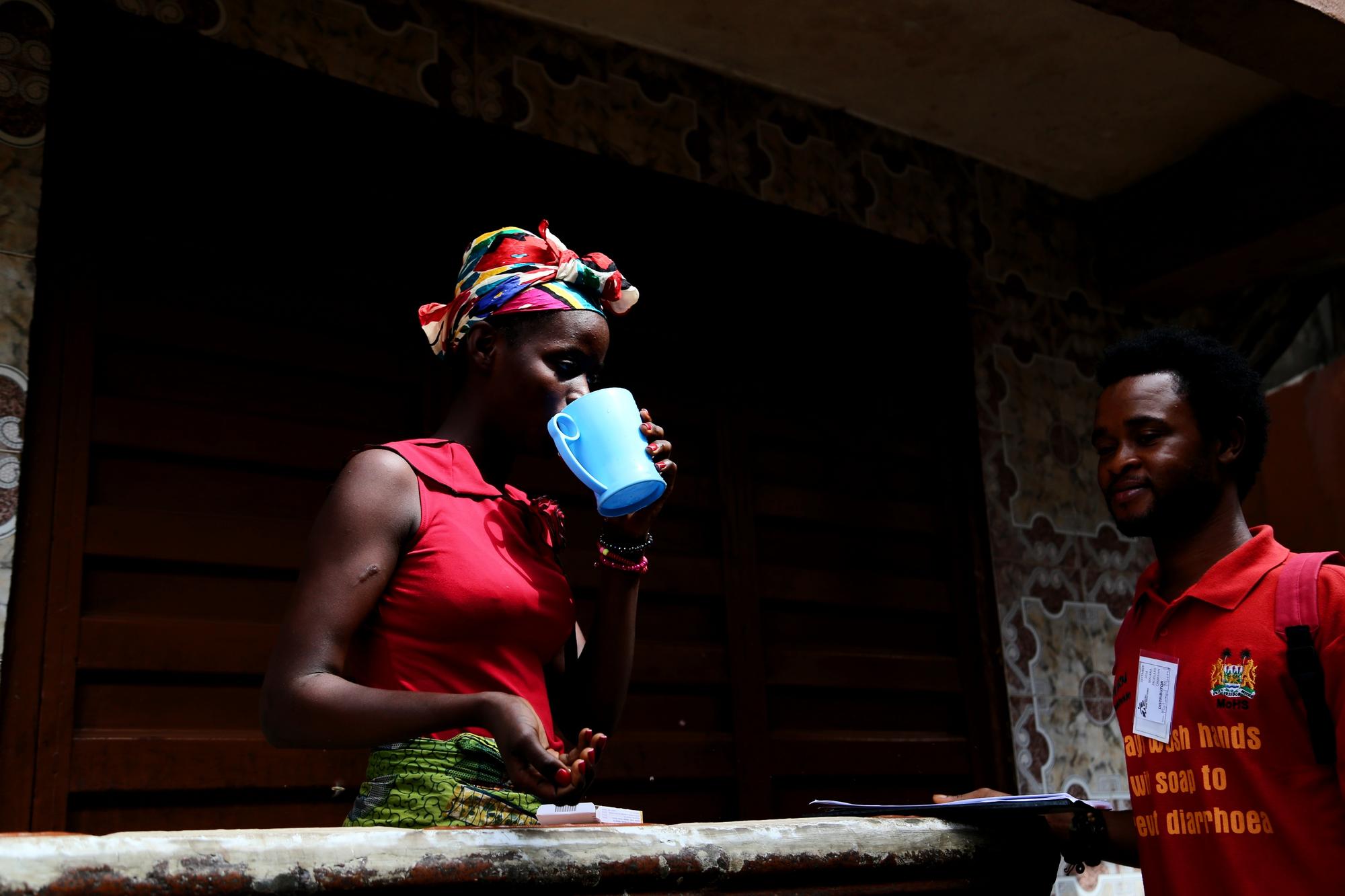 Caption
The community health workers encourage the beneficiaries to take the drug in the moment they receive it in the slum of Mabella.
© Agus Morales/MSF

Murray Town is also home to Angela Taylor and her four children. “Malaria was and is our main health problem,” she says.

Previously, her family had to pay 25,000 Sierra Leonean leones (more than £4) for each malaria treatment.

“But Ebola is also a very serious problem,” adds Angela. “We are praying not to catch it. People are very conscious about it.”

Isatu and Angela received two of the 1.8 million antimalarial treatments delivered between 16th and 19th January by teams from Médecins Sans Frontières/Doctors Without Borders (MSF), working alongside the Ministry of Health.

This was the largest ever distribution of antimalarials in an Ebola outbreak. The chosen drug is artesunate amodiaquine, which can be used both to prevent and to treat malaria.

The goal is twofold: to reduce malaria cases, and to decongest the healthcare system, already overwhelmed by the Ebola epidemic.

Since both diseases have similar symptoms (fever, fatigue, headaches), many patients with malaria go to Ebola treatment centres fearing that they have contracted Ebola.

Many find it impossible to get treatment for malaria at local clinics because health staff are afraid that they have Ebola.

Organising a distribution on this scale takes a lot of effort, and the Ebola epidemic makes it even more complex.

Over 5,000 community health workers presented themselves at 119 clinics and health centres, where the drugs were stored, in order to distribute them door-to-door, to avoid people having to crowd together or wait in long queues, common features of many distributions.

The target was the Western Area, also known as Freetown Peninsula, which includes Freetown and its surrounding districts.

The antimalarials were delivered to overcrowded slums like Mabella, where it can be impossible to keep a safe distance from other people, and to fishing villages like Tombo, where the distribution was easier to coordinate with local communities because it is less densely populated.

“You need to explain very well how and why to take the drugs, otherwise you could be boosting possible side-effects or people could refuse to take them,” says Ramiro García, MSF information, education and communication officer.

Local radio stations aired programmes to inform people about the distribution and to answer listeners’ questions. 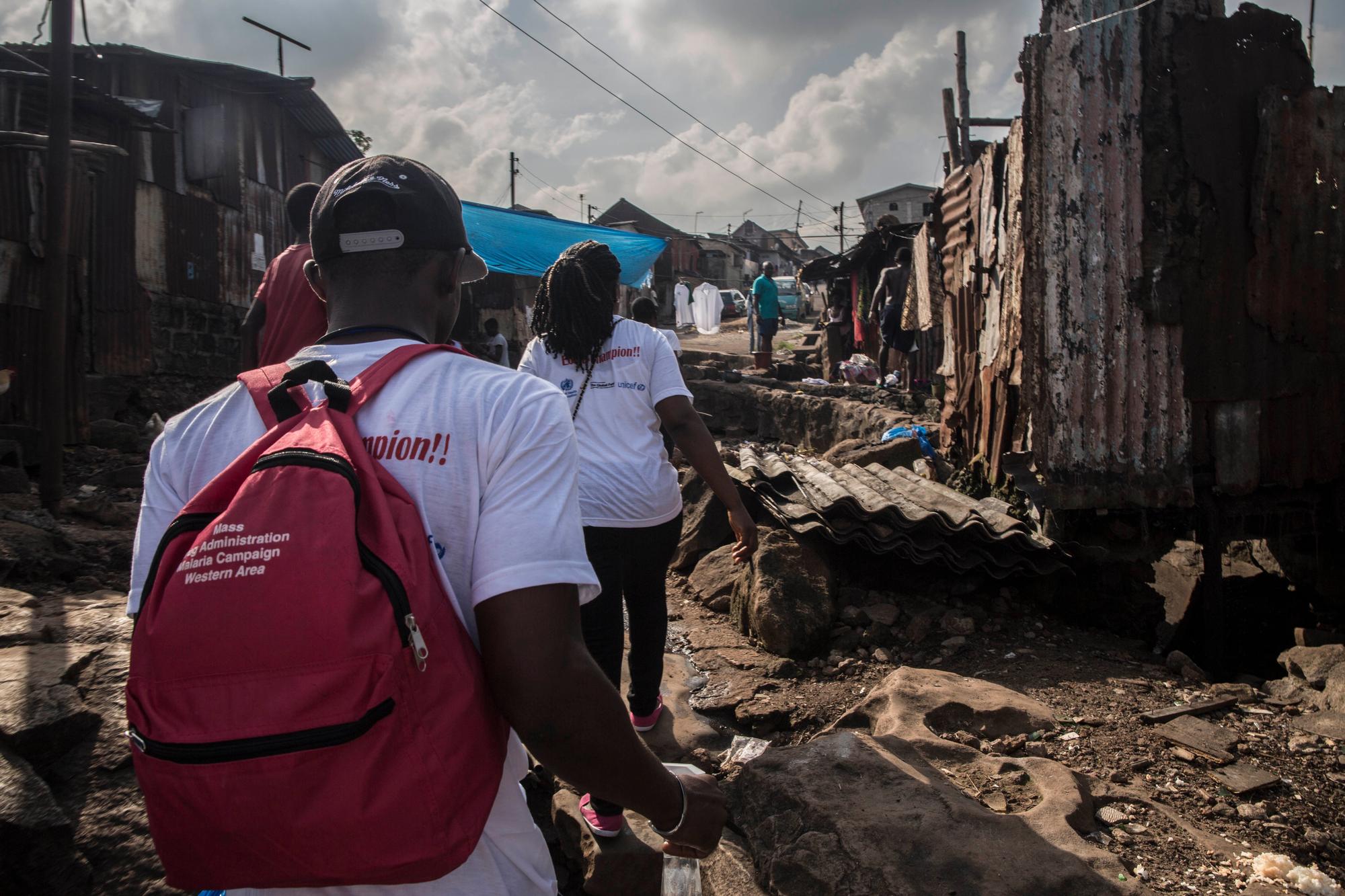 Caption
Together with the Ministry of Health and amidst an Ebola oubreak, MSF has conducted one of the biggest anti-malaria drugs distribution.
© Anna Surinyach/MSF

This distribution follows a first round in December, and it is part of a larger campaign supported by the Ministry of Health and Unicef and targeting 2.5 million people.

In Isatu and Angela’s neighbourhood, where malaria is the main health problem, there has only been one case of Ebola, but everyone knows about it. “It was a nurse. She lived down there, but she died,” says Angela.

Suddenly, one of the neighbours listening in on the conversation cuts in. “When will this Ebola epidemic be over?” he asks MSF workers, who shrug their shoulders.

No one has the precise answer, but everyone in Murray Town knows that when Ebola goes away, malaria will still be there.

In 2014, Sierra Leone seemed as though it was finally putting its brutal, decade-long civil war behind it. The west African country was enjoying susbtantial economic growth when, in May 2014, it was faced with another disaster: Ebola.

Access to medical care in Sierra Leone was already limited before the Ebola epidemic and it is estimated that around 10 percent of the country’s health workers were among the 3,950 people killed by the virus. Sierra Leone was finally declared Ebola-free on 17 March 2016 and is now struggling to rebuild its shattered health system.

Médecins Sans Frontières/Doctors Without Borders (MSF) teams work in hospitals, primary health facilities and in the community to increase access to healthcare, fill gaps in the provision of essential medicines, and help develop the country’s health workforce with a focus is on maternal and child healthcare.