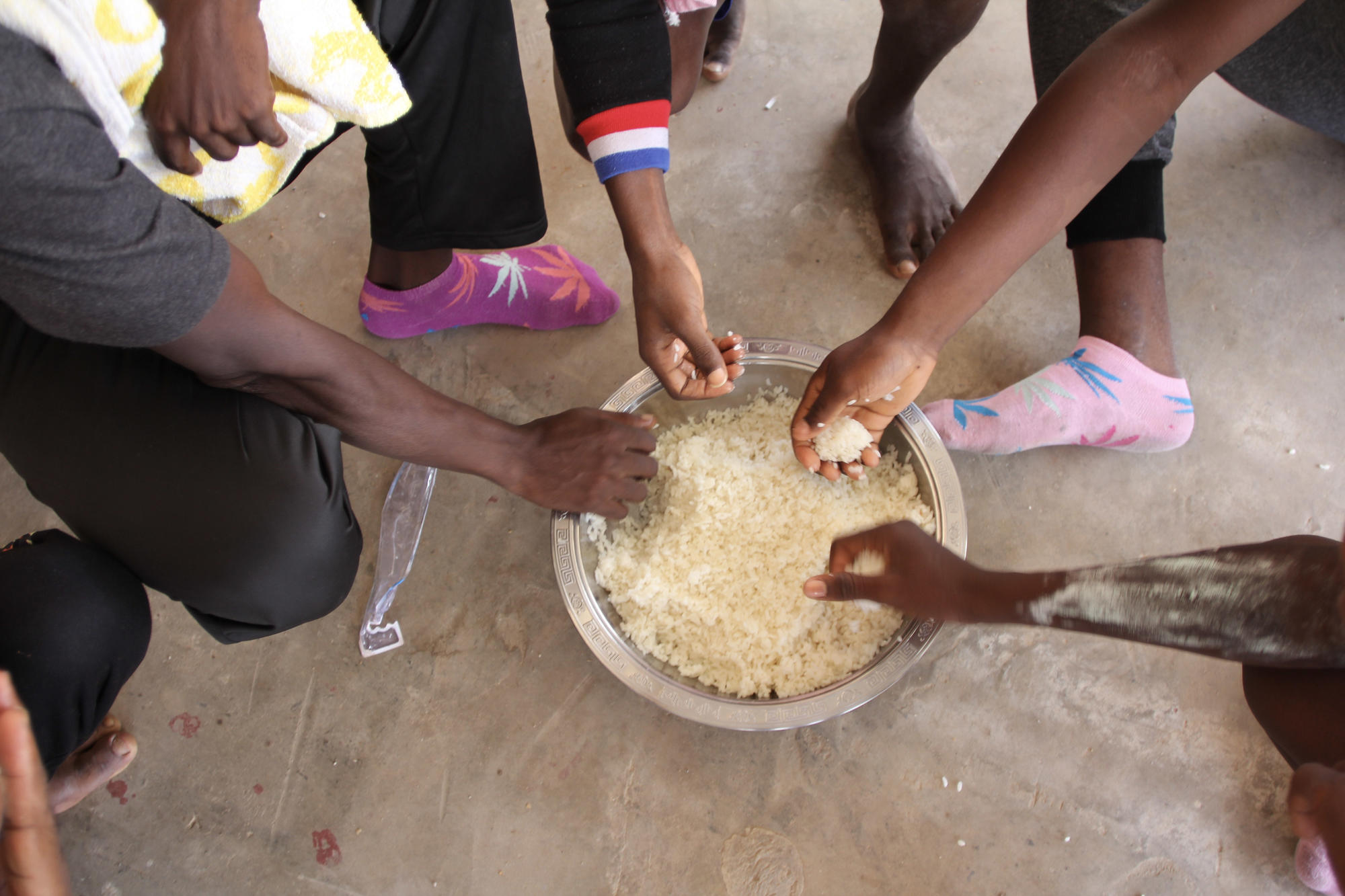 Caption
Refugees and migrants detained in the detention centre get rice or pasta for lunch and dinner.
© Sara Creta/MSF

Refugees and migrants arbitrarily held in Sabaa detention centre in Tripoli are suffering from alarming rates of acute malnutrition, while some were recently locked in a small room with only 0.7 m2 of space per person, says international medical organisation Médecins Sans Frontières/Doctors Without Borders (MSF).

There are currently over 300 detainees in Sabaa, including more than 100 children under 18-years-old. MSF calls on Libyan authorities and the international community to urgently address the inhumane and dangerous conditions in Libyan detention centres.

Two rounds of nutrition assessments published in a report by MSF indicate that nearly a quarter of people held in Sabaa detention centre are malnourished or underweight, with children being significantly more likely to suffer from severe and moderate malnutrition.

The findings support individual testimonies which state that people in the detention centre receive only one meal every two or three days, and that new arrivals to the centre can wait up to four days before receiving food.

The UK Government has been a key supporter of European policies which seek to trap people in Libya, in appalling conditions

MSF’s most recent nutrition assessment, conducted in February 2019, shows that nearly one in four people in Sabaa exhibit signs linked to the inconsistent provision and poor quality of food.

On 21 February, MSF began providing emergency food rations in Sabaa to address the serious food shortages and improve the health of the population. On the same day, an MSF medical team discovered 31 people locked up in a small room measuring just 4.5 metres by 5 metres, allowing only 0.7 m2 of space per person.

There was no space to lie down, the room had no latrines and people were forced to urinate in buckets and plastic bottles.

Despite repeated calls by MSF that they be relocated to a more appropriate space, people continued to be detained in this room for more than a week.

“What we see today in this single detention centre is symptomatic of an uncontrolled, unjustified, and reckless system that puts the lives of refugees and migrants at risk,” says Karline Kleijer, MSF’s head of emergencies.

“We’re talking about the basic necessities required to sustain human life. If food, shelter and essential services can’t be provided in a consistent and appropriate manner, then these people should be released immediately by the Libyan authorities.

"The fact that Europe, too, is contributing to this suffering through policies that enable people rescued at sea to be forcibly returned to inhumane detention conditions in Libya is utterly unconscionable.”

Vickie Hawkins, Executive Director of MSF UK, said: “The UK Government has been a key supporter of European policies which seek to trap people in Libya, in appalling conditions.”

“Through funding and training of the Libyan coastguard, the UK supports the forcible return of those trying to flee the country to detention. And it has direct knowledge of just how bad conditions are in the detention system – the UK Government itself has described these as ‘appalling’.

"The UK Government, therefore, has a responsibility towards those who continue to suffer in Libya. It must lead by example, by speaking out against and reversing the policies which seek to trap people in detention under terrible conditions, and by urgently finding alternatives to prevent the suffering these policies cause.”

MSF remains opposed to the arbitrary detention of refugees, migrants and asylum seekers in Libya, and continues to denounce the policies of European member states that enable the forced return of these vulnerable people to conditions that are degrading and dangerous.

MSF continues to call upon Libyan authorities and the international community to respond immediately to the situation in Libya by:

For more than two years, MSF has been providing medical care to refugees, migrants and asylum seekers held in detention centres in Tripoli, Khoms, Zliten, and Misrata that are nominally under the authority of the Libyan Ministry of Interior and its agency for combating illegal immigration (DCIM).

Detainees in these centres are not guaranteed access to medical care – this is provided by a handful of humanitarian organisations such as MSF or by UN agencies that have a limited presence in the country despite widespread violence and insecurity.

In addition to providing lifesaving referrals, MSF medics treat detainees for medical problems mostly caused or aggravated by the lack of consistent or adequate medical assistance and the inhumane conditions inside the detention centres.