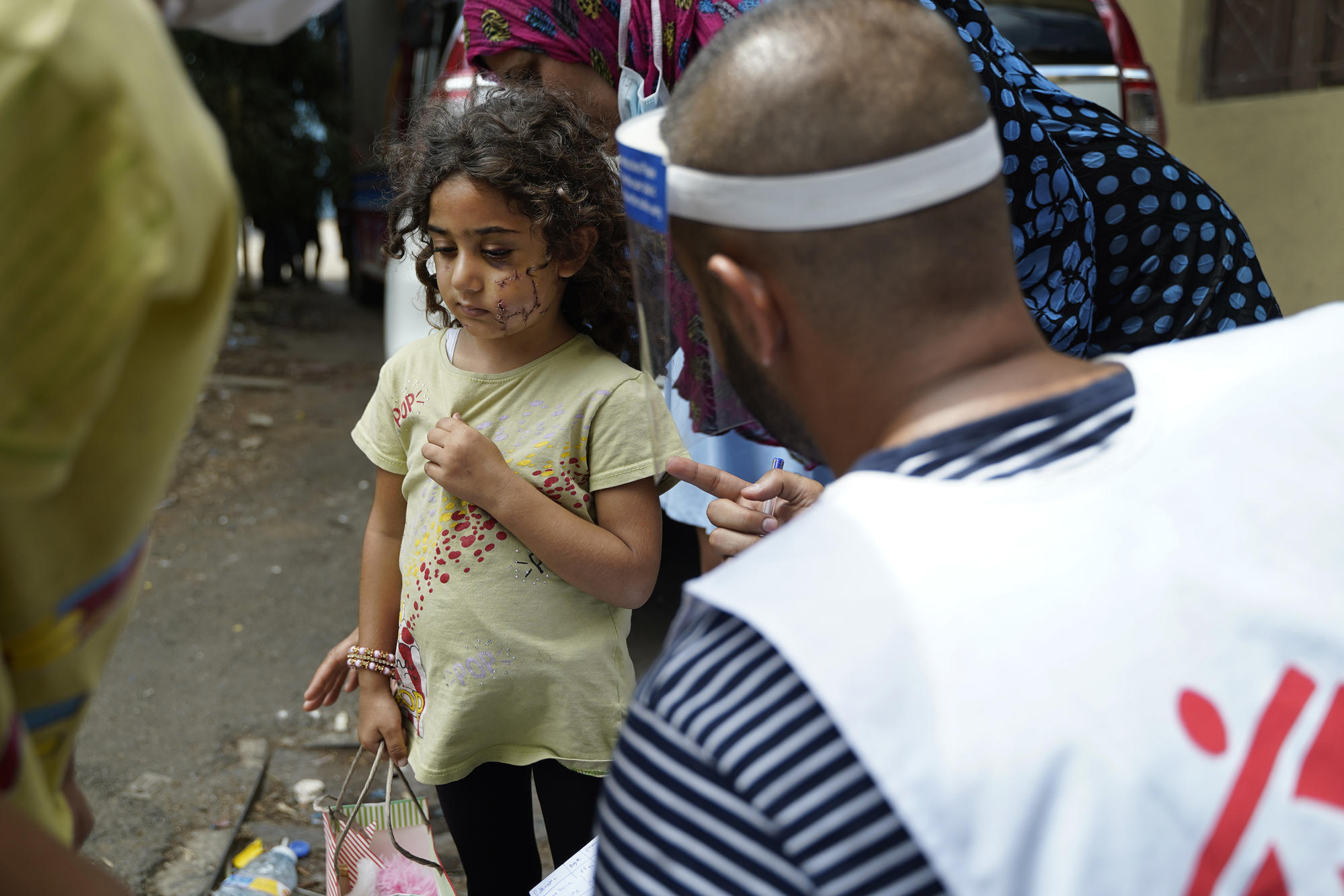 Caption
Three-year-old Samar received emergency treatment from MSF for a facial injury sustained in the Beirut blast. Here, a door-to-door team stops to chat with her following her recent reconstructive surgery.
© Mohamad Cheblak/MSF

On 4 August, a powerful explosion tore through Beirut, killing more than 200 people and injuring over 6,500 more.

The blast at warehouses storing highly explosive material sent a seismic shockwave across the city, smashing into buildings and homes throughout the Lebanese capital. Five public hospitals were hit, as well as storage for medicines and vaccines.

Today, Lebanon is facing three crises – economic collapse, COVID-19 and the devastation left by the blast – while mass protests have filled Beirut’s streets.

Jonathan Whittall, former coordinator in Beirut for Médecins Sans Frontières / Doctors Without Borders (MSF) and now director of MSF’s analysis team, explains the full aftermath of the explosion one month on...

Crisis on top of a crisis

"Lebanon has been battered by wave after wave of crisis. The explosion in Beirut has exposed needs and vulnerabilities that until now were hidden just beneath the surface.

"It is impossible to draw a line between the cause of people’s suffering – an economic crisis, COVID-19, war in neighbouring countries or the port explosion"

The people whose houses have been destroyed experienced an economic collapse just months before the explosion, pushing many of them into poverty. Some had fled war in recent years before seeking refuge in Lebanon; most have lived through the political uncertainty of the past year’s protests. And like the rest of the world, Lebanon has also experienced a pandemic that has put huge strain on the country.

This explosion was a crisis no one should be forced to absorb. For Lebanon, it is a crisis on top of a crisis that has left people angry and tired.

The initial humanitarian response was primarily delivered by Lebanese organisations and the community itself.

People ferried the wounded to hospital in their cars and opened their homes to those who had lost theirs. Across the city, people mobilised to provide food, clean water, essential items and emergency healthcare. Volunteers have been cleaning up the streets and patching up the wounded.

However, in the hours after the explosion, Beirut’s already overstretched hospitals received thousands of wounded. Private healthcare has become unaffordable, so many people turned to public hospitals that were already under strain from COVID-19.

But despite the serious challenges, treatment of the wounded was carried out by incredibly dedicated health workers – some in hospitals destroyed or damaged by the blast.

How MSF is helping

Our emergency response has been designed to work alongside the community one.

We quickly realised that it was not only the injured who needed help, but also those patients on medication for chronic diseases. Many had lost or run out of their drugs, couldn’t afford refills or could no longer access health facilities that had been damaged or destroyed. The consequences of going without these medications can be life-threatening. 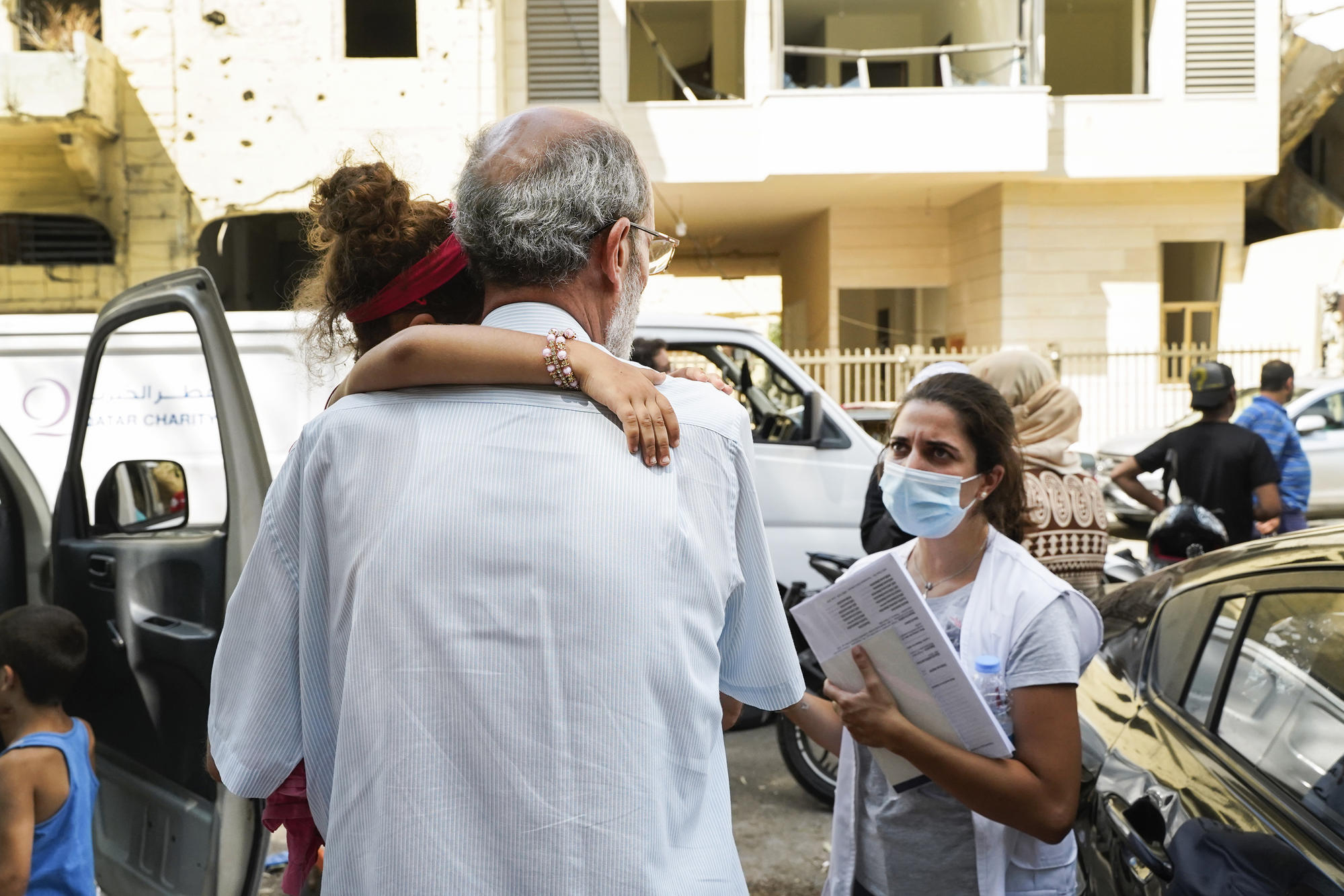 So far, we’ve provided 737 people with wound care and have seen 2,360 patients with chronic diseases at our medical points. We also have psychologists working from these locations and carrying out home visits.

Another way we are helping is by providing training on infection prevention and control for community volunteers working on the frontlines. We have a duty to reduce people’s exposure to COVID-19.

The traditional aid system is taking time to be fully mobilised. Lots of assessments are being carried out, but we hear from the community that they are tired of teams coming to survey their needs and then leaving. As MSF, we tried to avoid this. We are providing hygiene kits while identifying which patients need emergency medication refills.

Another issue is that, traditionally, humanitarian aid in Lebanon has often been provided based on the nationality or legal status of the recipient. This means that some aid is given to Syrian and Palestinian refugees, while other initiatives focus on vulnerable Lebanese communities.

"Many of those working in the response to this latest crisis have told me that they don’t want a pat on the back for being resilient; they simply don’t want to have to do this all again"

However, in the current situation, it is impossible to draw a line between the cause of people’s suffering – an economic crisis, COVID-19, war in neighbouring countries or the port explosion – nor is it possible to divide up those who need assistance based on whether they are a refugee, a migrant or Lebanese.

We have seen and heard of cases where people are not given assistance because they are a migrant or a refugee and vice versa. The explosion did not distinguish between its victims and neither should the aid response.

A humanitarian response is needed that ensures that everyone who needs assistance receives it.

As an emergency medical humanitarian organisation, we have a role to play in the early days of a crisis. In Beirut, we see our role as working alongside community initiatives, bridging the gap until other aid organisations arrive.

We have motivated, dedicated and highly skilled teams that came together from different MSF projects in the country to lead this emergency response. We even saw staff from across the organisation in Lebanon volunteering to help clear the streets of rubble in the days after the explosion. 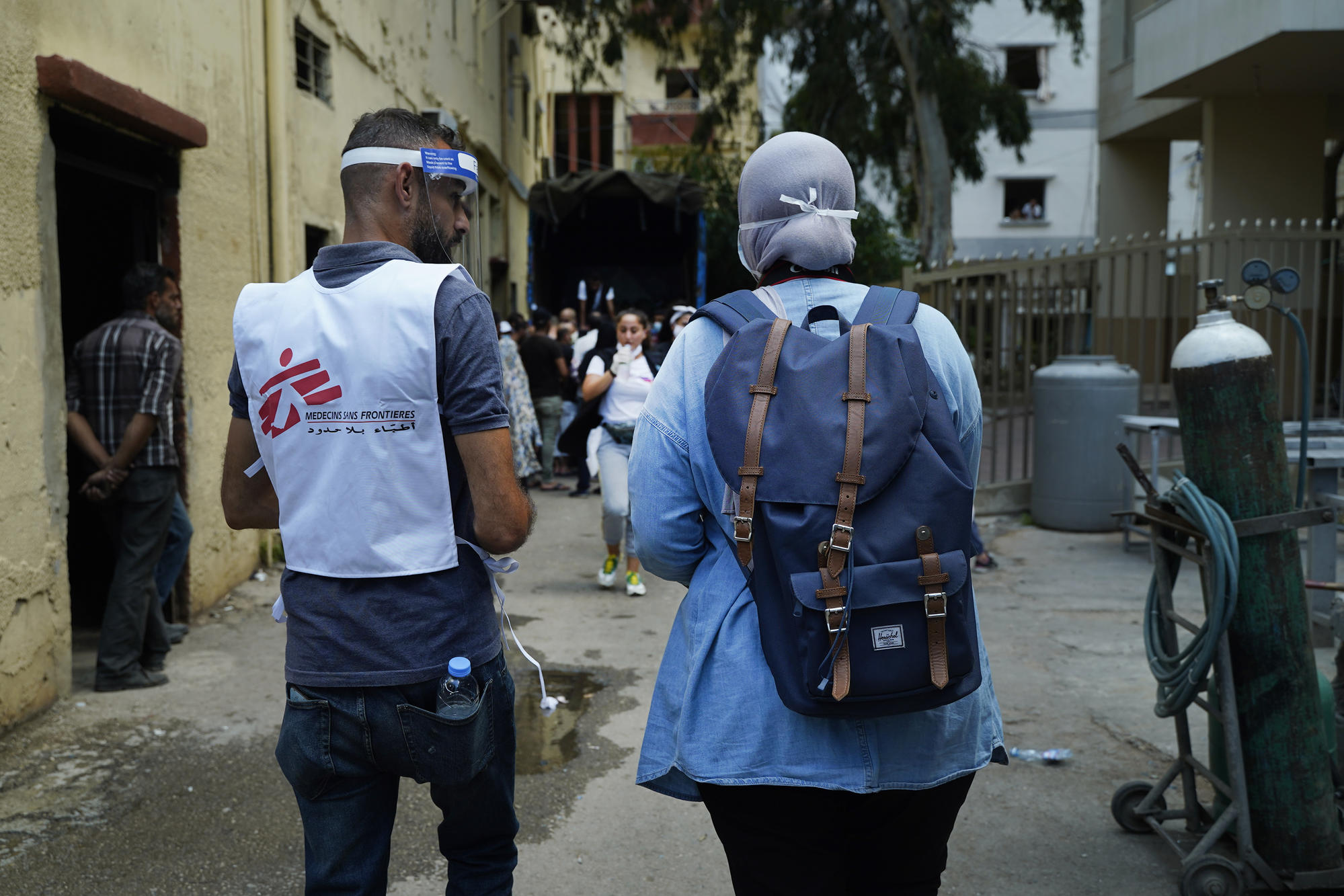 Our response is small compared to the collective efforts of the communities themselves, and our approach has been to adapt to fill the gaps, a flexibility that is enabled by our independent funding.

We will continue to play our part, but as the situation in Lebanon worsens we need to see an aid system that can respond to the overall crisis instead of segments of suffering.

Communities have been commended for their “resilience”, however, what has happened is a series of man-made crises from which people should not be continually expected to bounce back. States should protect people, not generate the need for endless resilience.

Following a disaster, picking up the pieces is a matter of survival. But applauding the tragedy of living in perpetual survival mode can normalise an unacceptable cycle of what some have described to me as a form of “state-sanctioned abuse”.

Many of those working in the response to this latest crisis have told me that they don’t want a pat on the back for being resilient; they simply don’t want to have to do this all again."

Médecins Sans Frontières/Doctors Without Borders (MSF) has been working in Lebanon since 1976, when we began our response to the 15-year civil war.

Today, we  provide general and specialist healthcare to host, migrant and refugee communities.

A particular focus is helping refugees, many of whom live in deplorable conditions with their most basic needs unmet.